Trey Gowdy Has A Black Friend 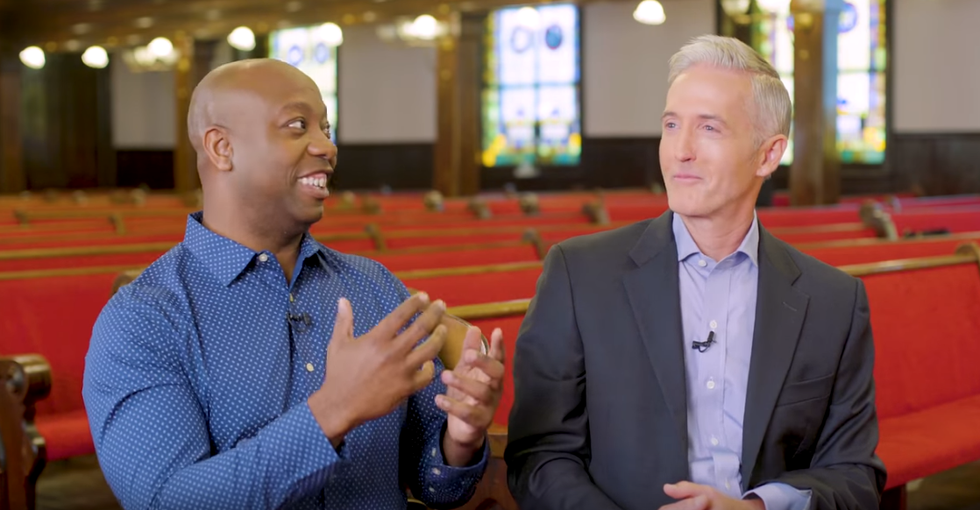 WIPE THE HEARTWARMING RACIAL TRANSCENDENCE TEARS FROM YOUR EYES RIGHT NOW, THIS BOOK REPORT IS NOT OVER YET.

Let's look at the Amazon description:

In a divided country desperate for unity, two sons of South Carolina show how different races, life experiences, and pathways can lead to a deep friendship—even in a state that was rocked to its core by the 2015 Charleston church shooting.

Tim Scott, an African-American US senator, and Trey Gowdy, a white US congressman, won’t allow racial lines to divide them. They work together, eat meals together, campaign together, and make decisions together.

WHOA! They eat stuff together? They must be TOTAL BFFs!

But it wasn't always so hunky dory, because here's why:

Yet in the fall of 2010 -- as two brand-new members of the US House of Representatives -- they did not even know each other.

OK so let us get this straight. When Trey Gowdy and Tim Scott became congressmen, they had never met before. BUT YET THEY PERSISTED? In making friends? THE FUCK YOU SAY!

Their story as politicians and friends began the moment they met and is a model for others seeking true reconciliation.

This is just really nice. If Trey Gowdy can make a black friend, SO CAN YOU, RACIST UNCLE GREG. (That, incidentally, would have been a good title for this book.)

The Amazon description continues with a quote from the flap of the book:

Unified tells the remarkable story of two men who came from very different backgrounds: one the ambitious grandson of a cotton picker, the other trained as a lawyer. Decades ago, no one would have predicted their paths would one day be intertwined. But they became good friends and an inspiration to others. If such a friendship can thrive in the competitive world of Washington, DC, it can happen in your community as well.

We are sure glad these two Republicans were able to part the Red Sea between them, because we guess Trey Gowdy had never met a black person before (???). Yeah, you can let the racial transcendence waterworks flow now, because YOU ARE NOT CRYING, WE ARE CRYING.

You know, if Trey Gowdy had written a book about his unlikely friendship with Maxine Waters or John Lewis, that might be somethin'. As for this? Well, we guess we lib-nasty warbloggers at Wonkette may not exactly be the target audience, but we guess if some white racist Cletus in the hills of South Carolina reads it and decides to try to open his heart to black folks more, that could be a good thing. After all, Tim Scott, for all his Republican-ness, does demand that his white colleagues listen sometimes, when he speaks the truth about being pulled over for driving while black, and being stopped by Capitol police, for lawmaking while black. He also calls Donald Trump out on his shit sometimes, like when Trump is having one of his really openly white-hood racist sorta days.

And at least when it comes to their friendship, these two guys seem remarkably sincere and we fully believe they stay up until late-thirty o'clock and eat too much pizza and talk about boys, like even on school nights. Hooray, racism is solved!

Ugh, maybe we are being WAY TOO MUCH OF A DICK about this, because the entire point of their book is that they think the change we need in our society happens one UNLIKELY friendship like theirs at a time, though we -- who are, again, lib-nasty warbloggers at Wonkette -- think it's also worthwhile to break down institutional discrimination in our politics, such as the kind promulgated by Gowdy's and Scott's beloved Republican party. (You know, like when they shit all over voting rights and stuff!) Maybe they are going to do that next! Oh wait, Trey Gowdy is quitting Congress, so maybe not.

Now you may have an open thread.