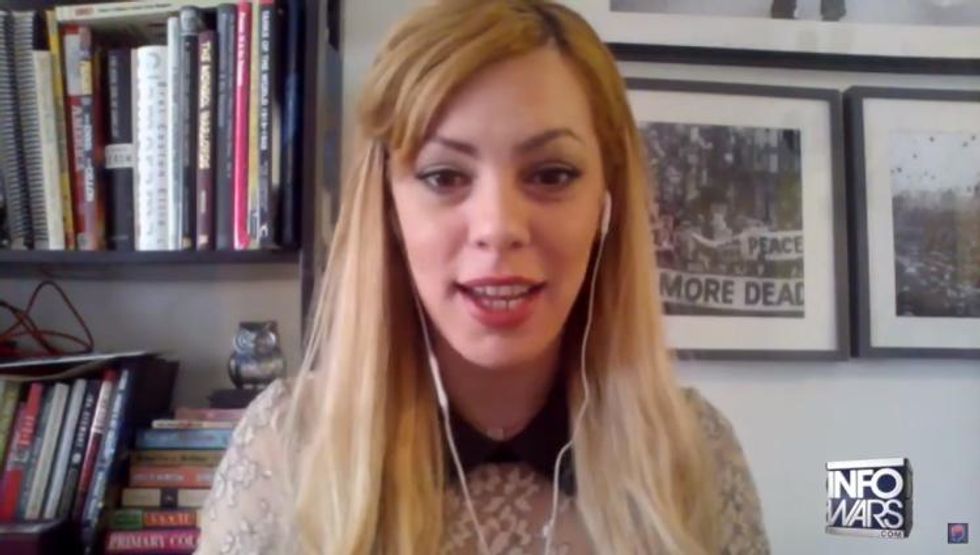 Let's talk about Cassandra Fairbanks. IF WE MUST. Because without attention, that nitwit would just shrivel up and blow away, and the world would be a better place. But since she has filed a defamation lawsuit against Fusion reporter Emma Roller, we have a few words of loving correction before we go back to pretending that she does not exist.

Why should an invisible line created by some poiticians dictate where we can and cannot go? If I want to go to the beach at 11pm I should be able to. If I feel like rowing a boat to Australia, why cant I just go?

Sadly, Fairbanks never did paddle that dinghy out into the Atlantic. After the Orlando nightclub shooting, she decided that terrorism was the problem, and Trump was the solution.

Yes, we know #NotAllMillennials. Fairbanks' latest article in Big League Politics, "Sit Down Hillary Clinton, Here’s What ‘Covfefe’ Really Means" is exactly as dumb as you think it is.

But because Trumpland gets its wee feefees in a bunch when questioned by IRL journalists, White House press passes are being handed out to "alternative media outlets." Which is like allowing peewee football standouts into the NFL, but we elected a reality teevee star as president -- this is the America we live in. We also live in an America where a bunch of assholes who never went to the prom get into an internet circle jerk and come up with plans to troll the liberal media by adopting a fake white power symbol.

And then the Moron Squad all took pictures of themselves doing it.

And their dipshit followers added it to their Twitter handles next to the milk and the frog. Liberals: OWNED.

Most of the alt-right bigboys left out the hand signs. But Roger Stone is A OLD, so he didn't get the memo.

Then Cassandra got herself a White House press pass. And took this picture.

Which was retweeted by Emma Roller at Fusion who described it as "just two people doing a white power hand gesture in the White House."

Are we all caught up with our derp now?

Cassandra Fairbanks then filed a lawsuit against Emma Roller alleging that she had been defamed, because Emma Roller called her a "white supremacist."

Many members of prominent media organizations see themselves as the exclusive arbiters of truth. Protecting their self-declared monopoly, many of these "journalists" use their perch of public influence to defame, slander and libel those they disagree with politically and ideologically. They see the First Amendment as a sword, not a shield; they view the First Amendment as only protecting those with elites on their rolodex, and view the First Amendment as a wholly owned property of elite-backed journalists to smear and slime their adversaries at will with libels and defamation. In fact, the First Amendment's foundations rest on the cornerstones of independent, outsider writers, scribes, advocates and journalists from Thomas Paine to Thomas Jefferson, almost always resisted by the establishment courtiers of, and courtesans to the truth-corrupted powers of their day.

Yeah, Cassandra Fairbanks is a scribe.

And Emma Roller is a courtesan.

And Cassandra Fairbanks would like $100,000 please, because Emma Roller defamed her and intentionally caused her emotional distress. Which seems a little snowflake-y, in our humble opinion. Especially since Emma Roller only pointed out that Fairbanks and Cernovich were flashing White Power signs. She never characterized the parties as "white supremacist."

And also, SHUT UP YOU WHINY LITTLE CHILD.

Because, as LA Times reporter Matt Pearce pointed out, Ms. Fairbanks seems to have been deliberately trolling in hopes that someone would call her out and give her the opportunity to shout, LOOK AT ME! I'M THE REAL VICTIM HERE!

First she was laughing at her own hilarious joke.

Then she was giggling because people fell for it.

Then deleting it, when she realized feigned outrage would be better for her career.

And now she is sad and wants money.

Okay, Cassandra. As the mother of two teenage boys, I am familiar with this game. Many times I have realized that I can't forward a picture to Grandma because one or both of my guys happened to be "scratching his eyebrow" with his middle finger in the background.

But when I confront them, I get a sheepish, "HEH HEH HEH...sorry, Mom." They don't deny flipping the bird, and they don't threaten to sue me for spreading lies about them and hurting their feelings. Because they might be obnoxious teenagers, but they're not lying little sociopaths. UNLIKE SOME PEOPLE.

You, Cassandra, are 32-years-old, which is about 20 years too many for this bullshit! You are not a First Amendment Warrior. You're a sniveling brat trying to further your career by filing a junk lawsuit. Bedroom selfies and rambling conspiracy theories aren't outsider journalism -- they're pathetic self-promotion.