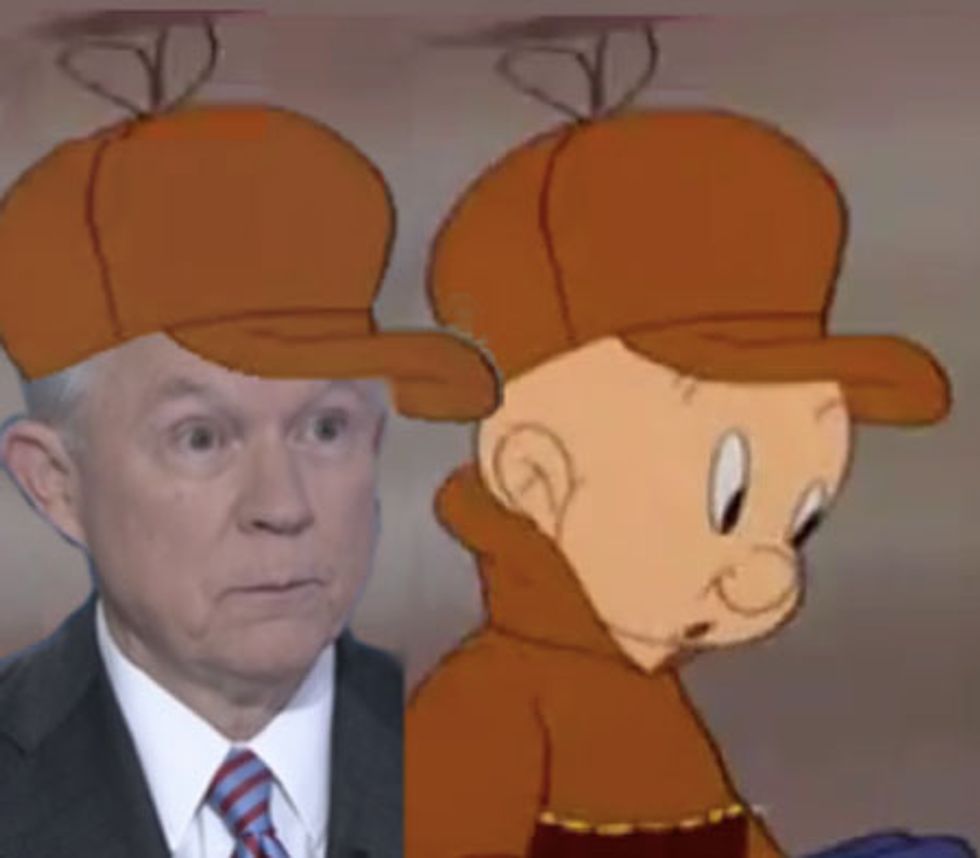 It's almost looking as if the Trump transition team's attempt to repackage Sen. Jeff Sessions as a longtime civil rights advocate is getting a bit of pushback from reality. Sure, everyone already knew that back during the Reagan administration, the Republican-controlled Senate Judiciary Committee had found ol' Jefferson Beauregard Sessions III just a tad too racist to be a federal judge, but that's because R's back then were a bunch of politically correct cucks who still thought it might hurt their reputations to be openly racist. Since those times, the Republicans have become much more adept at turd-polishing, and ol' Jeff Beauregard is now a respected member of the Senate. Somehow, he also retroactively grew a record of prosecuting civil rights cases that he hadn't had back in 1986. Team Trump even listed some of his outstanding achievements in a list of talking points for Republicans about Trump nominees, extolling

Sen. Sessions’ strong civil rights record includes a host of desegregation lawsuits he filed in Alabama while he was U.S. Attorney, voting in favor of the 30-year extension of the Civil Rights Act, voting to confirm Attorney General Eric Holder, spearheading the effort to award the Congressional Gold Medal to Rosa Parks, and much more. [emphasis in original]

The record isn’t Sessions’s to burnish. We won’t let the nominee misstate his civil rights history to get the job of the nation’s chief law enforcement officer.

The attorneys note Sessions lists on his confirmation questionnaire for the Judiciary committee four civil rights cases he claims he "personally handled" as U.S Attorney; three were about voting rights, and another involved school desegregation. After complaints that he had not in fact personally prosecuted the cases, he submitted a supplemental form saying he'd provided "assistance and guidance" to the Justice Department attorneys who'd actually pursued the cases. The lawyers say both claims are a load of hooey, although they say it a lot more formal-like, as befits your law-talking guys:

We worked in the Justice Department’s Civil Rights Division, which brought those lawsuits; we handled three of the four ourselves. We can state categorically that Sessions had no substantive involvement in any of them. He did what any U.S. attorney would have had to do: He signed his name on the complaint, and we added his name on any motions or briefs. That’s it.

A Trump appointee exaggerating his record? We are ever so thankful we were sitting down when we read that! The attorneys explain that Civil Rights Division lawyers handle most voting rights and school desegregation cases from Washington, while the local U.S. Attorney simply signs the paperwork as a "mere formality." And it's very rare for a state U.S. attorney to advise Justice Department lawyers as cases proceed. It happens, but that wasn't the case with the three cases these lawyers accuse Sessions of wrongly taking credit for.

What's more, the attorneys point out that when Sessions underwent his unsuccessful confirmation hearings in 1986, he hadn't listed those four cases on his Judiciary Committee questionnaire; instead, he'd listed criminal cases he actually had prosecuted. Why the switch? Possibly because he and Team Trump hoped nobody would call attention to how little involvement Sessions actually had in civil rights cases. Back in 1986,

Sessions indicated that he discussed civil rights cases with department attorneys only when they came to Mobile, Ala., to get him to sign complaints. He also said he did not try any civil cases himself while U.S. attorney, focusing instead on criminal prosecutions. Indeed, he said it was Tom Figures -- the same African American assistant whom Sessions allegedly called “boy” -- who handled all of the office’s civil rights cases.

It's almost as if this guy always takes credit for stuff he didn't do. Huh!

You may be shocked to learn that this is not the job creation Trump promised.

Huh! It's almost as if taking credit for stuff you had nothing to do with is some kind of theme for the Trump people. If the boss can do it, why not Sessions?

The lawyers aren't especially impressed by the other talking points touting Sessions's supposed civil rights record. The reauthorization of the Voting Rights Act, they note, "took no special courage -- the measure passed the Senate 98 to 0." (And while they don't mention it, the same could be said for his vote to honor Rosa Parks -- the only vote anyone would notice would be a vote against it!) Mind you, when the Supreme Court gutted the Voting Rights Act in 2013, Sessions "celebrated," and "has opposed all efforts to fix it since."

These guys being attorneys, they know how to deliver a well-crafted final argument. This closing paragraph should be used in college writing classes (at least at campuses where the Young Republicans won't try to harass teachers into leaving town):

Sessions has not worked to protect civil rights. He worked against civil rights at every turn. Sessions knows that his real record on race and civil rights is harmful to his chances for confirmation. So he has made up a fake one. But many of us who were there — in Alabama in the 1980s, 1990s and beyond — are still around. We lived that story, too. And we are here to testify that Sessions has done many things throughout his 40-year career. Protecting civil rights has not been one of them.

Democrats on the Judiciary Committee, we hope you're preparing your witness lists.