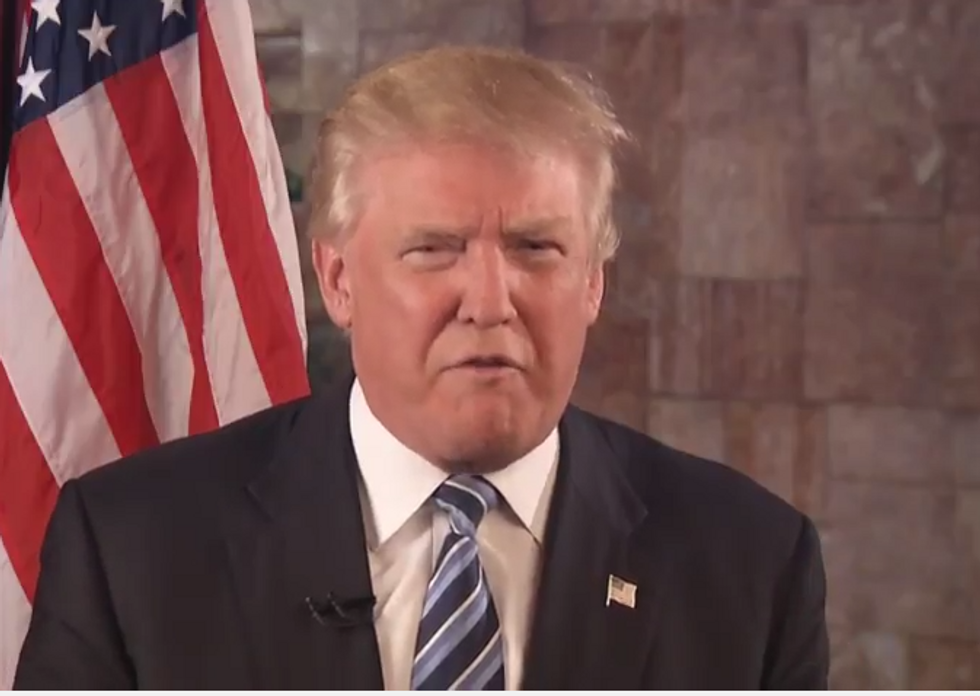 I suppose I'm expected to PAY them, too?

Lots of momentum as the Trump Train steams into Washington with almost nobody on board really knowing anything about choo choos, except now they've got their hands on the controls of one. Sunday, President-elect Trump named his chief of staff, who will be RNC chair Reince Priebus, why not, and also announced that former Breitbart Gauleiter Steve Bannon would be Trump's "chief strategist and senior counsel." In other words, the guy he really listens to while Priebus takes care of the boring business of making the White House run. If the Trump White House is anything like the Trump campaign, we expect the whole mess to be in a constant state of confusion, with Priebus, Trump, and whoever ends up press secretary (Alex Jones?) all making contradictory announcements about what the President's latest retweet of an account named "White Genocide" means. So pretty much normal for TrumpWorld.

“Steve and Reince are highly qualified leaders who worked well together on our campaign and led us to a historic victory,” Mr. Trump said in a statement. “Now I will have them both with me in the White House as we work to make America great again.”

A deep, wonky dive into how hard Breitbart and Stephen Bannon suck.

It has not yet been announced who'll be on drums.

Bannon, of course, is notorious for his intentionally turning Breitbart into the primary voice for xenophobia and friendly white nationalism and actual Nazis on the interwebs, so there's a guy you want whispering into the president's ear. He's also spent the past week inviting such luminaries as Nigel Farage and Marion LePen to form a global white nationalist supergroup to take over THE WORLD.

Bannon being tapped as a "special adviser" to the president is a bit like if Wonkette's publisher were made Hillary Clinton's National Security Adviser, with the exception that Wonkette doesn't traffic in actual propaganda, Wonkette isn't into the whole Nazi thing, and Wonkette's ex-wife never accused her, in their divorce papers, of not wanting to send their daughters to a certain private school because it had too many Jews.

But let's never mind the white supremacy, since the mainstream media sure don't! They're busy focusing on Bannon's being a "provocateur" and "anti-establishment," and the fact that the stupid Trumpkins literally have no idea how anything works.

Here's your mandatory jaw-dropper from the Wall Street Journal's story on the transition-tussle, a couple of paragraphs you might want to print out and frame as a preview of the next four years:

During their private White House meeting on Thursday, Mr. Obama walked his successor through the duties of running the country, and Mr. Trump seemed surprised by the scope, said people familiar with the meeting. Trump aides were described by those people as unaware that the entire presidential staff working in the West Wing had to be replaced at the end of Mr. Obama’s term.

After meeting with Mr. Trump, the only person to be elected president without having held a government or military position, Mr. Obama realized the Republican needs more guidance. He plans to spend more time with his successor than presidents typically do, people familiar with the matter said.

Imagine that! Running a country is a big job? The deuce you say! Apparently, The West Wing was never part of Trump's TV menu. Maybe he can watch it on Blu-Ray and learn things, as long as someone explains to him C.J. Cregg is a fictional character and wouldn't put up with his gropey bullshit anyway. And so, for the good of the nation, Barack Obama will provide extra hand-holding for the freak whose political career has been all about questioning his legitimacy. There's your Above and Beyond.

The difference between President-elect Trump and a politician is that Trump puts a premium on making the right decision, not the politically expedient one. President-elect Trump’s excellent judgment and temperament has served him well in business and in life, and he’s not going to be swayed by a bunch of political insiders responsible for filling up the swamp in the first place.

Translation: We don't know what the hell we're doing, so we'll pretend it's because of careful deliberations, not panic and disorder behind the scenes. Then we'll name whichever leftovers from previous Republican administrations the rightwing think tanks tell us to.

Paywalled out of the WSJ piece? Try googling the title, "RNC Chair Reince Priebus Is Named Donald Trump’s Chief of Staff," and you should be able to enjoy it, if that's the word.