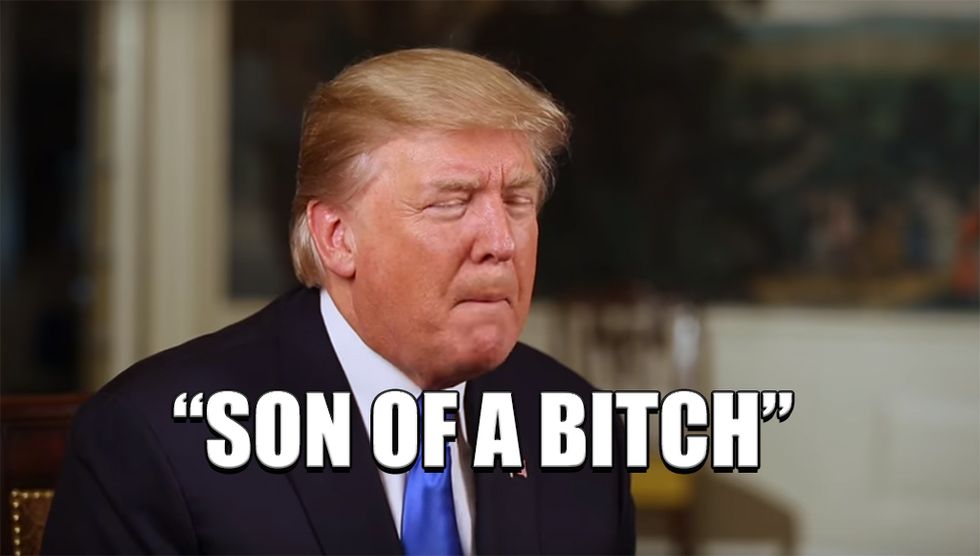 Good Monday morning, Wonketariat! Did somebody ruin your sportsball? Here's some of the things we may be talking about today.

Over the weekend sportballers decided to get down on their knees in support of all the not-white people who routinely have their constitutional rights violated, and Trump called them sons of bitches because he's a fat, unclassy fuck from Queens.

Shit is bad in Puerto Rico, y'all, and it's only getting worse as people ignore all the suffering.

Not America is coming to aid all the Messicans struggling to find survivors, but people are still worried about aftershocks and unstable buildings.

Just to set the record straight, Steve Mnuchin went on teevee to let people know that he has thoughts about wasting shitloads of taxpayer money, and all the angry black sportsballers. Make sure your coffee cup is empty before reading this one. ['Script]

Lindsey Graham and Bill Cassidy are rejiggering their zombie TrumpCare bill in an effort to drag Alaska, Arizona, and Kentucky to the table.

Trump will kick his plan for tax cuts for the super-rich into gear this week at a rally in Indiana, where those tax cuts will benefit tens of their citizens!

The Trumped-up trickle-down tax cuts will shrink tax brackets to three from seven, lower the corporate rates, and kill off state and local tax deductions, that way the rubble of small-town America will shine before it's stripped and sold for scrap.

Trump indefinitely expanded his Muslim bantravel restrictions on Muslim majority countries to include more Not American freedom haters; now you can't call it a "Muslim ban."

Even after being called out, Tom Price was STILL flying over 'Murica in fancy jets this past week -- but now that he's being investigated he'll suffer in First Class with the peasants.

Pilots with close ties to terrorists are still flying the friendly skies despite multiple warnings from the FAA as far back as 2009. Happy trails to you! [Archive]

People are wondering if Prince Kushner pulled a Hill-ghazi when he started using a private email address to conduct government business. LOCK HIM UP!

Democrats are planning on making life a hell of a lot harder for Trump and Republicans by dumping millions into Nowhere, America's elections for attorneys general.

Congressional staffers on both sides of the aisle are cashing in on their government access by buying and selling stocks that rise and fall with the legislation passing through their committees. The paper chase is real, ya'll.

Someone inside Florida Governor Rick Scott's office deleted voicemails from staff members attempting to report their concern for residents at a nursing home where 11 people died in the fallout of Hurricane Irma. There's no joke here.

A New Orleans mayoral candidate is standing at attention after being accused of rubbing one out in the back of an Uber while on a Californication vacay.

The leader of the free world, German Chancellor Angela Merkel, has won a fourth term, despite the creep of ethno-nationalists.

Britain's foppish former Prime Minister Tony Blair thinks all the Berniecrats are worse than Donald Trump for their flat-out opposition -- unlike the Republicans who refused to work with The Black Guy, that was probably different.

Iraqi Kurds are hoping to gain their independence in a referendum being held today despite opposition from the the rest of the world that has been fucking over the Kurds for over a century.

Before Zuckerberg was bullshitting us about making Facebook great again, B. Barry Bamz had to set his ass straight.

Marching through the streets with bandanas and signs might be in vogue, but protesting has been become illegal in some states because it hurts the feefees of normal, Crom-fearing assholes.

Dame Peggington ponders whether or not Trump's "bluntness" shall catalyze world peace amongst the unwashed, uncivilized savages and commoners. [Archive]

John McCain says Trump never bothered to apologize for calling him a loser-ass failure for being shot down and imprisoned for FIVE AND A HALF YEARS in Vietnam.

Dan Harmon hates his fans because they keep being misogynist shitheads who think it's OK to troll the women who write for their favorite show.

We need your support! Everything you see on Wonkette is made possible by readers like you, so give us all your money (please)!