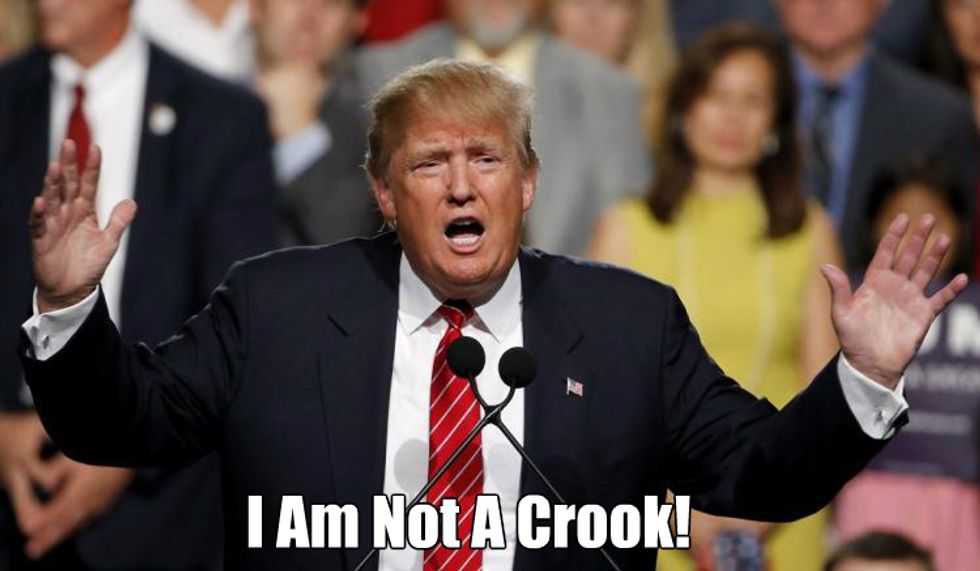 Funny, most people forget Nixon was talking about his taxes when he said that.

You might want to sit down for this one, kids: Would you believe that Donald Trump, his daughter Ivanka, and his son Donald Junior have all been named in a lawsuit involving a massive tax avoidance scam related to four Trump-branded real estate deals? Astonishing, we know -- we'll give you a nanosecond to catch your breath.

He is described as a “material witness” in the evasion of taxes on as much as $250 million in income. According to the court papers, that includes $100 million in profits and $65 million in real-estate transfer taxes from a Manhattan high rise project bearing his familiar name.

However, his status may change, according to the lawyers who filed the lawsuit, Richard Lerner and Frederick M. Oberlander, citing Trump’s testimony about Felix Sater, a convicted stock swindler at the center of the alleged scheme.

This Felix Sater guy is quite the "colorful character," as we'll see in a moment. But how about the Trumps? What's their involvement in this? Mostly, getting buttloads of money while others do the work (dirty or not), as is their lot in life:

As usual, there's a nice record of Trump and his family hanging out with Sater, the convicted stock swindler guy: Trump and Sater traveled all over the place together, and "were photographed and interviewed in Denver and Loveland, Colorado, Phoenix, Fort Lauderdale, and New York." The younger Trumplings also met with Sater at least once, in Moscow, according to an attorney for the Trump Organization.

By now, you should know what's coming: Trump, who enjoys telling the media he has the greatest memory of any human alive, insists he barely even knows this Sater guy:

Trump has testified about Sater in a Florida lawsuit accusing the two of them of fraud in a failed high-rise project. Trump testified that he had a glancing knowledge of Sater and would not recognize him if he were sitting in the room.

He meets lots of people. And if some of them are accused of fraud, or if he's insulted them publicly for being disabled, then maybe he doesn't remember them so good anymore. It's kind of weird that Trump has no idea who Sater was and wouldn't recognize him, though, seeing as how Sater ran an investment firm, "Bayrock," which had its offices in Trump Tower, and worked a bunch of development deals for Trump-branded office buildings. Still, Trump Tower's a big building, and you can't expect Donald to know all his tenants. It's not like he's running a boarding house. Oh, except maybe this would suggest Sater knew Trump a little better than the doorman:

Can't imagine why anyone would think Trump knew the guy.

Now, we'll let you guys go read Johnston's piece for all the fun financial details of the tax fraud lawsuit, because lawyer-and-money stuff makes our eyes go all funny; what it comes down to is that partners in the four Trump-branded developments allegedly didn't properly report their profits on the deals, and that the defendants (who, again, don't include "material witnesses" Trump and kids -- yet) are alleged to owe at least "$7 million in New York state income taxes, a sum that would be tripled" if the lawsuit is successful. And then, if the feds decide to get involved, there'd be another $35 million in unpaid federal taxes.

Johnston also details a convoluted string of other legal actions involving Sater, all of which thumped against each other like dominoes to lead to the unsealing of the current tax evasion lawsuit. This is where Safer's associations start getting really interesting. Back in 1998, Sater pleaded guilty to running a stock swindle, in which

the $40 million fleeced from investors went to him, the Genovese and Gambino crime families and others.

In 1998 Sater pleaded guilty in federal court, but the plea was kept secret. Sater was sentenced in secret in 2009 to probation and a $25,000 fine with no jail time and no requirement to make restitution.

Huh! Mobbed up partners -- this Sater sounds like a fine person to do business with. And a personal charmer, too, Johnston notes:

That was an extraordinarily light sentence, especially given Sater’s violent past. In 1991 he admitted to shoving the broken stem of a margarita glass into a man’s face and was sentenced to two years.

Well, yeah, but he'd paid his debt to society, and nobody got a margarita glass in the face in the stock fraud case.

Besides, even though Sater is a really colorful guy (who might also have been an undercover operative for the CIA, maybe), Donald Trump hardly even knows him, and in fact was not part of that 1998 scheme. He just knows guys who know guys, is all. We certainly are not suggesting there's any dirty money paying for all the gold plating on Trump properties, because we'd never hint at gilt by association.

On the other hand, notes Johnston, it's awfully curious, maybe, that Donald Trump has refused to release any of his income tax returns, which every single presidential nominee has done since Richard Nixon in 1972. Trump says it's because his taxes from 2012 to now are being audited, but there's nothing preventing him from releasing them anyway:

Mark Everson, a former commissioner of Internal Revenue has said there is no reason to hold the returns back, even assuming they are being audited.

He has offered no explanation for not releasing his returns for 2011 and earlier, years on which he has said the audits are closed.

As Johnston points out, documents from the New Jersey Casino Control Commission show Trump paid no income taxes at all in 1978, 1979, 1992, and 1994, and as Johnston previously reported, Trump somehow managed not to pay income taxes in 1984, "by far his most lucrative year in his career to that point." Sort of makes you wonder what we'd find out if we got a look at Trump's taxes.

Would You Believe Donald Trump Might Be Bad At Charity?

Would you believe there's little evidence that Donald Trump has given anything near the amount of money he says he gives to charity? Of course you would.

Donald Trump To Be Law And Order President, Execute All Black Teens Not Playing Checkers

Donald Trump continued to crib lines from Richard Nixon's 1968 playbook, promising to be the 'law and order candidate' of 2016. His vow to crack down on hippies may not resonate quite as well.

Probably nothing interesting in those tax returns at all. Trump's merely humble, and wouldn't want anyone to think he was bragging about being a an incredibly wealthy, generous, and scrupulously honest businessman who's also a Law And Order kind of guy.