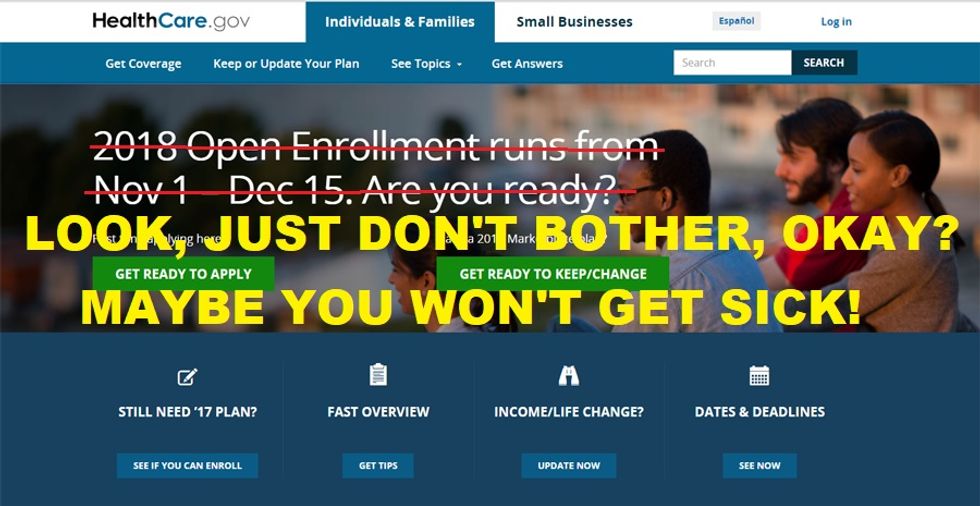 The TrumpCare signup page is getting kind of pushy.

As we've noted again and again, the Trump administration is doing what it can to let the Affordable Care Act "collapse on its own," if by "collapse on its own" you mean undermine and sabotage at every opportunity. We've seen this with Trump's recent executive order and decision to stop paying subsidies that help low-income policyholders. As we've also noted, the ACA has built-in features that make it pretty resilient, so Trump's worst efforts can't quite kill it without an outright repeal. Instead, Trump will continue to make moves that leave millions without health insurance and paying more for what they can get, all in the hope that the program will someday just die. Plus some number -- who knows? -- of troublesome poors, but they knew what they were signing up for.

Today, the Washington Post brings us an estimate that more than a million fewer Americans will even sign up for the ACA for 2018, thanks to a decision by Health and Human Services to slash the enrollment advertising budget by 90%. Joshua Peck, who ran open enrollment outreach for HHS last year, when the government still governed, says his estimate that 1.1 million fewer Americans will enroll for 2018 ACA plans is a "best case scenario," calculating only the number of people who will fail to sign up for insurance because of the cuts to outreach efforts, leaving aside those who'll be priced out of the market or otherwise lose coverage due to other Trump administration fuckery, of which there is plenty.

The tl;dr version of Peck's number-crunching? "Surprise: advertising works!" And Peck should know:

When it comes to estimating the impact of outreach, I am not pulling a number out of the air. The administration falsely asserted that “they had not done any studies of the efficacy of enrollment advertising”. This is absurd. The Department of Health and Human Services closely measured the impact of outreach during previous Open Enrollments so we have a clear understanding of how effective advertising is at driving enrollment.

He breaks down how a serious effort to make do with a tenth of the advertising budget for 2018 Open Enrollment might work, then happily acknowledges Team Trump won't even manage that because it's clear they have no intention of taking open enrollment seriously.

The biggest impediment to getting people signed up this year is that with such a huge loss of funding, ACA outreach won't be able to afford the big TV ad buys that were both the most expensive and the most effective way of convincing people to get over to Healthcare.gov in the first place. National TV outreach was responsible for about 40% of enrollments in previous years, and now, there's practically no money left to pay for it.

Similar story for web-search advertising, which pops up Healthcare.gov when someone searches for "health insurance" or "obamacare enrollment" -- Peck estimates HHS will have to cut back spending on those ads by 75%, and again, that's assuming HHS would be making an honest effort to reach out to people.

Phone and email outreach get more bang for the buck, since they're less expensive -- but more labor intensive. Peck notes they accounted for "roughly 30% of outreach driven new enrollments and 45% of outreach driven active renewals" -- and while he'd definitely prioritize those forms of outreach, there's a catch: Open enrollment will last just 45 days, from November 1 to December 15, instead of the 90 days of previous years, and that would reduce the effectiveness of calls and emails. The reduced time frame will also mean fewer chances to collect phone/email data from people who begin the enrollment process but need a nudge to complete it. And of course, the call centers will be dealing with much heavier traffic from people trying to enroll in half the available time.

Last year, the deadline to enroll for plans beginning January 1 was December 15, and so many people flooded the system as the deadline approached that HHS extended it four days (overall 2017 open enrollment ran until January 30). This year, the deadline for all 2018 plans is December 15, period. Don't plan on an extension. Oh, and the Healthcare.gov website will be offline "for maintenance" until noon every Sunday.

The upshot here is that Peck's estimate of 1.1 million fewer enrollments for 2018 is probably optimistic, since it assumes HHS would spend its remaining outreach budget intelligently, and not on more videos telling people how terrible Obamacare is.

That will be seriously bad news for those who rely on the exchanges for their insurance, as the Washington Post points out:

[It] would be a big setback for the marketplaces, where 9.2 million people chose coverage during the 2017 enrollment period. And the people who opt out of coverage are likelier to be the healthier ones who could improve the risk pools -- sicker people are thought to be more likely to actively seek coverage despite the lack of advertising.

And that means more instability and higher premiums in the market for next year, so Donald Trump can proclaim nobody wants Obamacare, since it's unaffordable. The man won't even have to shoot anyone on 5th Avenue, but he's probably keeping that option open, too.

The Obama Government-in-Exile now has a health insurance education division.

It's not all doom and gloom, though. From his previous work inside HHS, Peck knows how to promote the ACA, and he's one of the co-founders of the nonprofit group Get America Covered, which is working to get the word out about ACA open enrollment, since the government has given up on it. Without the resources of the federal government, the volunteer effort to get people over to Healthcare.gov can't hope to do the same job government should be doing, but damned if Peck and others who helped bring America's uninsured rate to historic lows are about to let it all go without a fight. George Soros, if you feel like throwing a few million dollars in pocket change in a useful direction, we know some folks who could use it.

Yr Wonkette is supported by reader donations! CLICK HERE to help us keep our own costs covered, thanks!