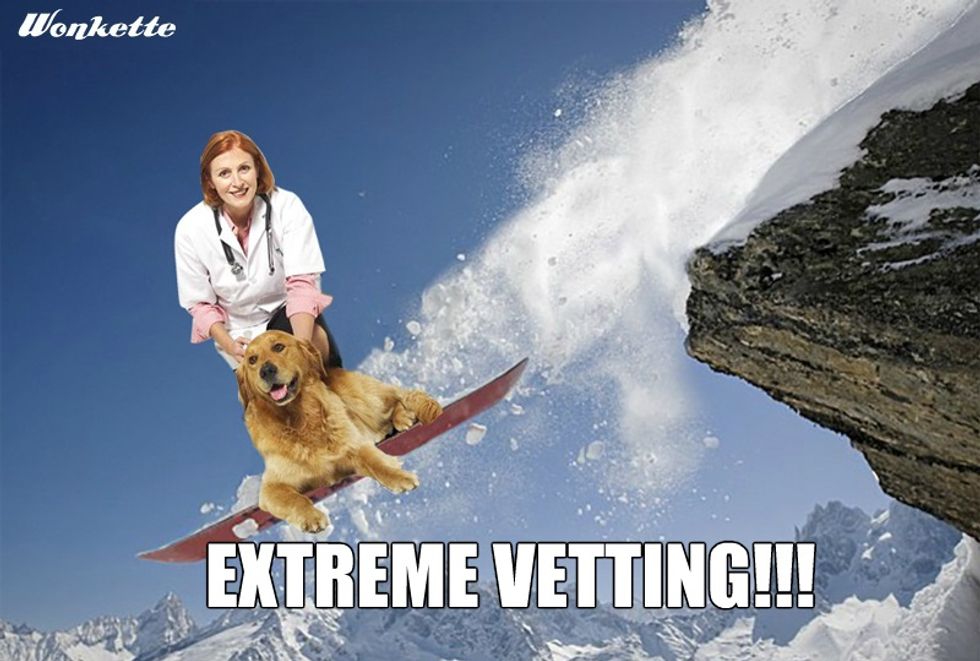 Rejoice, America! Donald Trump is finally going to make us safe from Syrian refugee children! A leaked draft of an executive order on immigration sets out the president's plan to implement "extreme vetting" of all immigrants and visitors to the USA, as well as putting in place a 30-day ban on visas from seven majority-Muslim countries and immediately ending entrance of refugees from Syria, site of the world's worst humanitarian crisis. It is not clear when the actual dismantling of the Statue of Liberty will begin, although we expect the poem on its pedestal to be sandblasted off immediately.

The order would place a 30-day stop to visas for immigrant and visitor visas for travelers from Iraq, Iran, Syria, Yemen, Sudan, Libya and Somalia, all Muslim-majority countries whose citizens the order says "would be detrimental to the interests of the United States." But it would not affect travelers from all Muslim countries -- the ban does not apply to Egypt, Turkey, Azerbaijan, the United Arab Emirates, and Saudi Arabia, which by complete coincidence are all countries where the Trump Organization has business interests. While the text of the executive order invokes the September 11, 2001 attack on the United States as a reason to be wary of scary Muslims who want to destroy America, the actual ban would not affect countries the 9/11 hijackers came from:

[wonkbar][/wonkbar]Oh dear -- we fear pointing that out may not be very supportive of the president, proving we just don't understand why he won.

The order would also immediately end all refugee admission and resettlement for 120 days while refugee vetting procedures -- already a 2-year process -- are tightened. It would put admission of Syrian refugees on hold indefinitely, because paranoia really sells well. After 120 days, refugee admissions would restart, but annual acceptance of refugees would be cut from 100,000 a year to 50,000, and would still exclude Syrian refugees, because the most desperate refugees clearly are the most dangerous.

The draft also calls for priority to be given to Christian refugees from Muslim countries, except that to at least pretend to conform with the Constitution, that's phrased with a pretense of neutrality: the 120-day refugee ban would not apply to "those refugee claims made by individuals on the basis of religious-based persecution, provided that the religion of the individual is a minority religion in the individual's country of nationality." No religious tests there, no sir.

As for Syrian refugees, Trump isn't altogether heartless -- the order would establish "safe zones" within Syria itself, where refugee camps would be located, so those people will be concentrated in one place but probably won't get bombed by ISIS or by our good friends the Russians.

Then there's the "extreme vetting" part:

The draft order instructs the U.S. government to screen visa applicants for their ideologies. “In order to protect Americans, we must ensure that those admitted to this country do not bear hostile attitudes toward our country and its founding principles,” the draft order reads.

The order says the United States should screen visa applicants to block access to those “who would place violent religious edicts over American law” and those who “engage in acts of bigotry or hatred” including “honor” killings, violence against women, and persecution on the basis of religion, race, gender and sexual orientation, a description that human rights groups say also appears to be geared toward Muslims, without naming Islam explicitly.

There may or may not also be a question demanding prospective immigrants and visitors to agree that Donald Trump had the biggest crowd at his inauguration of any president, ever.

For some reason, human rights groups seem less than enthusiastic about the proposal, noting that the most extreme bans on migration are applied to countries the US has bombed. It's not quite the complete Muslim ban Trump promised, and as of yet, it doesn't have a Muslim registry in it (give the bastard time), but it's plenty bad enough. Connecticut Democratic Sen. Chris Murphy even suggested in a statement Wednesday that it's something less than ideally American, somehow:

We bomb your country, creating a humanitarian nightmare, then lock you inside [...] That’s a horror movie, not a foreign policy.

But at least there's the "extreme vetting," so we can make sure the few dirty foreigns we do let in will love America. Why on earth they would under this regime is a complete mystery to us, but they'll need to do a good job of faking it.