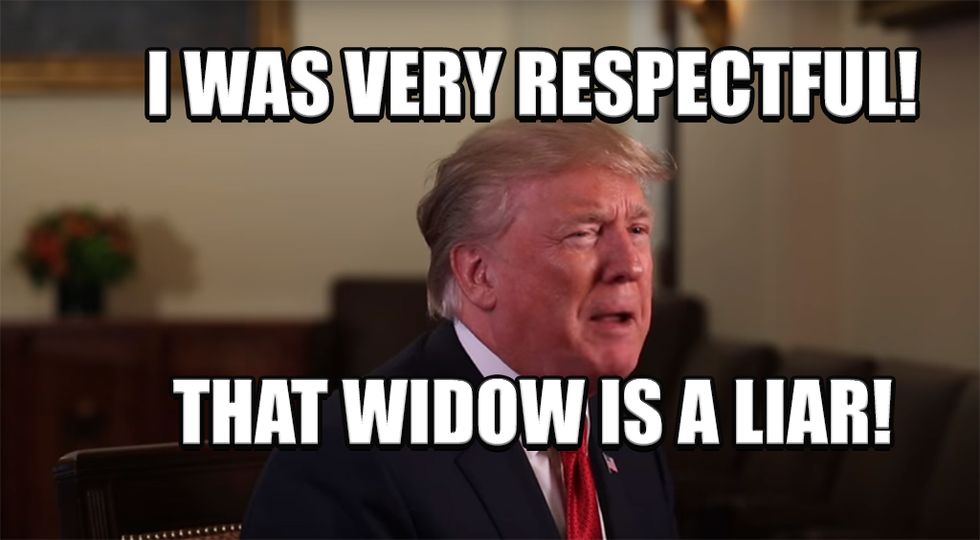 Myeshia Johnson, the widow of Sgt. La David Johnson, who was killed in action in Niger several weeks ago, spoke this morning about the phone call she received from Donald Trump. Johnson said the call left her, "very upset and hurt; it made me cry even worse... I was very angry at the tone of his voice, and how he said it."

Now that the Trump administration has insulted Gold Star Families (AGAIN,) it's rush-shipping condolence letters to the families of fallen soldiers.

An op-ed containing the signature of Donald Trump written in crayon is trying to push the Trump Tax Cuts for the super rich by conveniently forgetting that trickle down economics caused a recession at the end of the 1980s.

Trump is tweeting bullshit about the Republican tax plan to cap 401(k) contributions as a way to offset the revenue loss from cutting corporate taxes. It's GOOD for you!

Republicans are hoping to strong-arm Democrats into supporting Trump Tax Cuts for the super rich by dredging up old proposals.

Lindsey Graham is hoping to gain the affection of all the youths by pitching a minimum wage increase to a princely $10.10/hour, along with corporate tax cuts. That way all the poors can kiss his feet while they're digging for change.

Paul Ryan's tax plan is kicking around the idea that, if you bitch hard enough, he'll stick a fourth tax bracket on his tax plan. There are currently seven tax brackets; Ryan's current plan calls for three brackets of 12, 15 and 35 percent.

Chuck Schumer says that the Alexander-Murray healthcare bill has a bipartisan majority of support among Senators, and that it might be in everyone's best interest to fix at least one of Trump's fuck ups.

The crooked grasp of Paul Manafort ALLEGEDLY reached all the way to the Podesta Group as Robert Mueller is now investigating the firm for possible violations of the Foreign Agents Registration Act for its work with the European Centre for a Modern Ukraine, a Not American non-profit that has Manafort's cheeto-dusted fingerprints all over it. Is there pizza involved?

Donald Trump is promising almost half-a-million Ameros to pay the legal bills for current and former staffers legal caught up in Trump-Russia, however Trump doesn't exactly have the best track record when it comes to following through.

Trey Gowdy is getting ready to wave his white flag and decree the House Intelligence Committee can't find anything in its Trump-Russia investigation, possibly as a result of continued fuckery from Devin Nunes. The recused guy.

Mitch McConnell poked his head out from his shell to defend himself against Steve Bannon, telling Fox News Bannon is a "specialist at nominating people who lose."

Scott Pruitt seems to have been playing with some fuzzy math the other day when he said the US leads the world in C02 reductions -- it's actually the opposite. WE'RE NUMBER ONE!

Rather than get caught with its dick in an exhaust pipe, the EPA has canceled a discussion on climate change, causing tree hugging science bozos to accuse the EPA of censorship.

"I made a provocative and rhetorical comment as part of a free-flowing conversation which has been taken completely out of context" is the carefully crafted half-assed defense being used by Georgia State Republican Rep. Betty Price, the wife of former HHS secretary and grifty whackjob, Tom Price, who last week suggested quarantining people suffering from HIV.

A Montana Republican official says she "would have shot" Guardian reporter Ben Jacobs if he had come up to her, like he did to Rep. Greg Gianforte, to ask specific policy questions. Seriously.

11-year-old Ames Mayfield has now been officially kicked out of his den in the Cub Scouts -- ALLEGEDLY his punishment for calling out Colorado State Sen. Vicki Marble for her gun fetish.

The CIA is about to conduct some hardcore super secret spy shit in Afghanistan to hunt down suspected Taliban militants.

The World Health Organization has "You're Fired" Robert Mugabe as a goodwill ambassador after someone realized that's like appointing Caligula to coach high school sportsball.

The US is apologizing to the head of Indonesia's military after denying him entry to the US despite being invited by Joint Chiefs chair General Joseph Dunford.

Russian journalist Tatiana Felgenhauer is listed in critical condition after a man broke into a radio station and stabbed her in the neck. Moskvy is a known for her criticism of the Kremlin. Just a normal day in Russia. :(

DC's Newseum, the museum to the news, is in still in dire financial straits.Full Disclosure: It's AMAZE-BALLS!

Grumpy old John McCain was yelling at the youths on his lawn about the war again this weekend, griping to reporters about certain unnamed rich kids who beat the draft during Vietnam by getting a doctor to say they had bone spurs.

Next week Laura Ingraham will take over the 10pm EST time slot for Sean Hannity, but Fox News staffers are literally terrified of being forced to work on her show. Happy Halloween!

After accusing a fellow teevee talking head at Fox of rape, Scottie Nell Hughes claims to have been blackballed by virtually all media organizations, which is horrible, because if she can't get a job, it should be because she's a rightwing liar, not a whistle-blower.

Some Midwestern moms are apparently confused about the definition of sexual assault, telling the NYTimes, "In my generation, what these girls are going through was never considered assault...It was considered I was stupid and I got embarrassed." Greatest generation my ass.

Writer, director and fat, old jerk from Hollywood, James Toback, is being accused of playing grabass for decades by multiple women with stories so gross they'll make your stomach turn.

MRA crybaby Mike Cernovich wussed out of publishing his ALLEGED copy of the "shitty men in media" list which has been ALLEGEDLY floating around media circles for a few days because he needs to finish his homework.

And here's your morning Nice Time! NORA, the adorable and fuzzy polar bear!

Help us out with some money! We're ad-free because of nice people like you! You want to be nice, don't you? DON'T YOU?