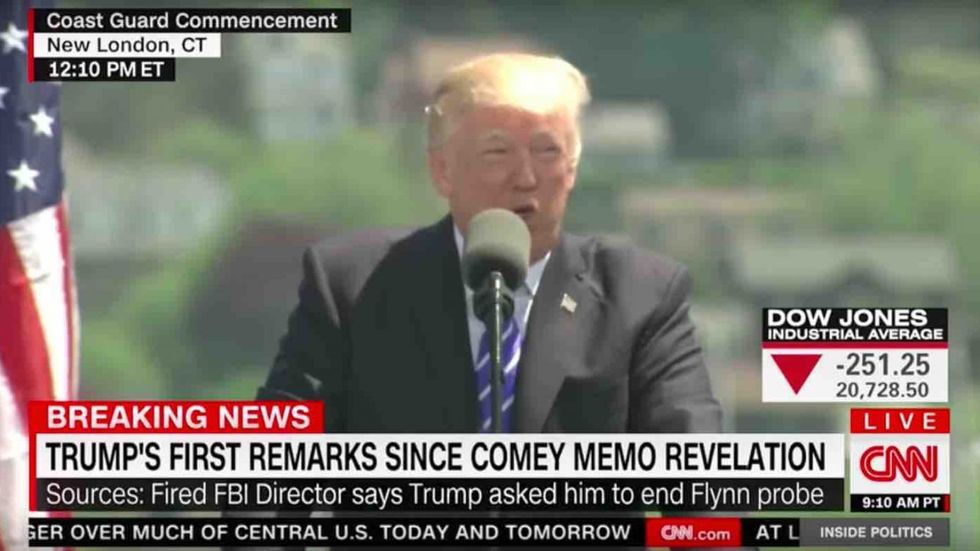 It was the last golden moments of the Trump Administration BM (Before Mueller). After Vanky smashed his phone Tuesday night, she gave him a couple of her "prescription vitamin tablets" to build up his strength. That's why they made her special assistant to the President -- she always knows how to make it better! She smoothed his hair and kissed his owies, then packed him off to give a commencement speech that the Coast Guard Academy will never forget!

The Coast Guard's motto is Semper Paratus, Always Ready. But is anyone really ready for Trump? How does one prepare to sweat through dress whites in the sun while being bombarded with 30 minutes of whining and derp from a draft-dodging egomaniac? Hats off to you, ensigns!

First he wowed them with 20 minutes of platitudes in his signature 15-year-old-who-never-read-the-book-and-is-trying-to-stretch-the-paper style. Listen closely, and you can hear the 16-pt font.

This is a large, large campus. A beautiful campus!...

You picked a beautiful one, a good one. And we're really proud to have you, I can tell you...

When you look back, you won't doubt. You'll know exactly how you spent your time!...

They're excited about life, and they love what they do. THEY LOVE LIFE.

And he brought a neat-o factoid to share with these men and women of the Coast Guard.

Coast guard cutters patrol more than 1500 miles below our Southern border. A lot of people didn't know that.

Yes, probably most people did not know that. But it's a safe bet that this was not news to the members of the 2017 class of the Coast Guard Academy. Weirdly, he forgot to mention his plan to cut $1.3 billion from the Coast Guard's budget.