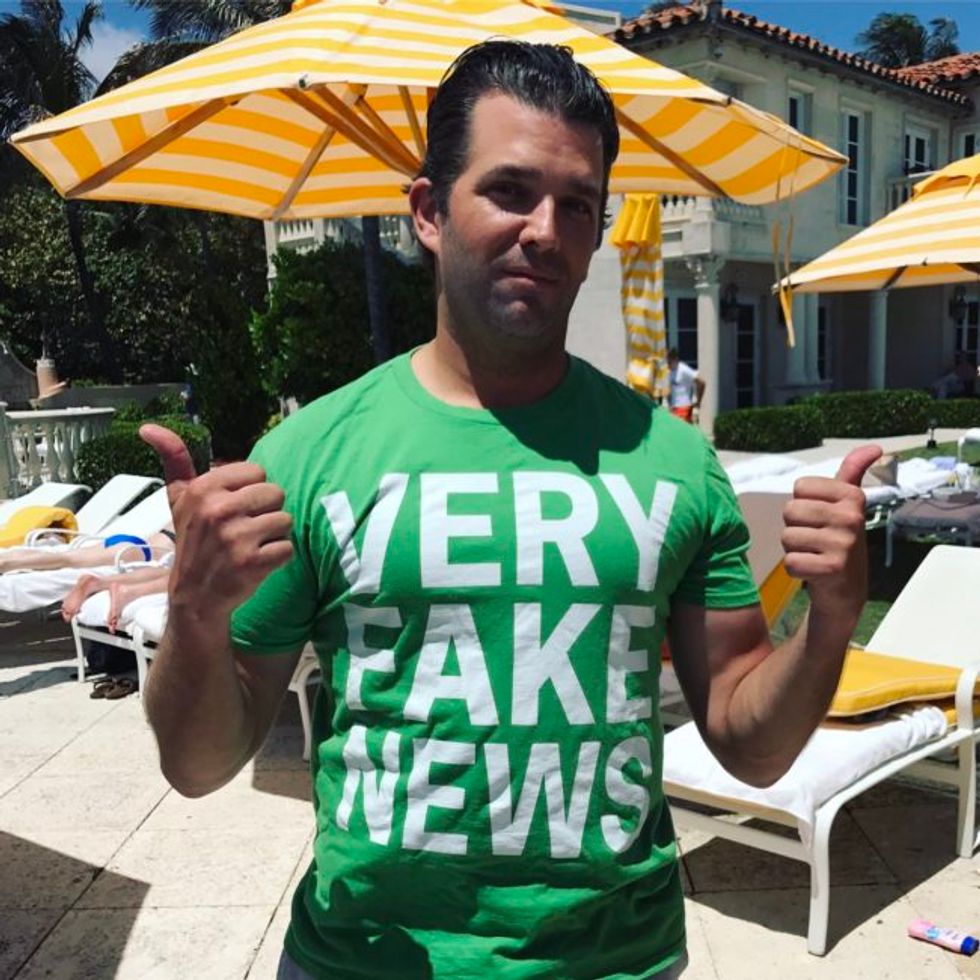 Never a bad time to use a picture of Junior looking like an idiot.

Did we not JUST finish writing a long examination of how Russian "troll farms" screwed with the 2016 election? The Daily Beast dug a little deeper into deleted Russian Twitter accounts mentioned in this week's report from Russian independent media organization RBC, and found one that Donald Trump's campaign people just couldn't stop retweeting, we guess because they share the same anti-American beliefs. Also, because Trump people are knucklefucking idiots.

One of the fake Twitter accounts run out of the Russian "Internet Research Agency" (IRA) was called @Ten_GOP, and it purported to be the "unofficial Twitter account of Tennessee Republicans." We guess those folks found it plausible that the Tennessee GOP needed an "unofficial" account, where it could let loose and not be so professional all the time. That account had over 100,000 followers! And it was so popular (and so in line with Trumpian GOP groupthink, we guess) that Trump And Pals just could not stop giving it likes and upvotes and hearts and retweets:

The discovery of the now-unavailable tweets presents the first evidence that several members of the Trump campaign pushed covert Russian propaganda on social media in the run-up to the 2016 election.

Kellyanne Conway did it:

“Mother of jailed sailor: ‘Hold Hillary to same standards as my son on Classified info’ #hillarysemail #WeinerGate” the tweet reads.

“Thousands of deplorables chanting to the media: ‘Tell The Truth!’ RT if you are also done w/ biased Media!” the tweet read.

And as the Daily Beast notes, Donald Trump's firstborn and technically most stupidest son Fuckface Junior was a big fan of @Ten_GOP. He followed the Russian fake troll account (and he only follows 1,164 accounts on Twitter, so he's not one of those people who rewards every follow with a follow back or something) and he gave the Russians an RT and a pat on the fanny every time they said something he found clever or interesting, like fake news about "tens of thousands" of people voting illegally for Hillary Clinton. God, there is something wrong with that boy.

Roger Stone was a fan.

Michael Flynn was a fan.

Oh, and Russian state-run media like Sputnik and RT were big fans too!

Overt Russian propaganda outlets Sputnik and RT frequently used @Ten_GOP’s tweets in their news stories, including a story titled “Russia has no compromising info on Trump or Clinton, report is ‘total bluff’—Kremlin.”

That is one giant Russian circle jerk right there.

Ann Coulter was a fan.

Stupidest Man On The Internet Jim Hoft AKA The Gateway Pundit was a fan.

As Wonk pal Charlie Pierce quips, so many of these idiots were following @Ten_GOP that "hearings must be held into whether the entire Republican Party was recreated in a Russian troll farm in the aftermath of the election of Barack Obama." Wonkette agrees!

Not everybody was fooled, though. A Republican strategist named Mike Hasson noticed something funky about this "unofficial home for Tennessee Republicans":

“For it to jump from Tennessee-related stuff and national stuff to [French crazy hate lady Marine] Le Pen, that was probably the trigger point—like, ‘OK, maybe there is something here that’s a lot worse,’” said Hasson.

Trust us -- the average Tennessee Republican could not find their ass with both hands or France on a map, and certainly wouldn't be shootin' the shit about Marine Le Pen. (Or Kremlin talking points on Syria, which was also a big thing on @Ten_GOP, apparently.)

Now if @Ten_GOP shared deep thoughts about Honey Boo Boo on the daily, that would be plausible.

Still fooled all those other fuckheads, though.