Trump Campaign Manager Kellyanne Conway Has Had It With You Media Scum! 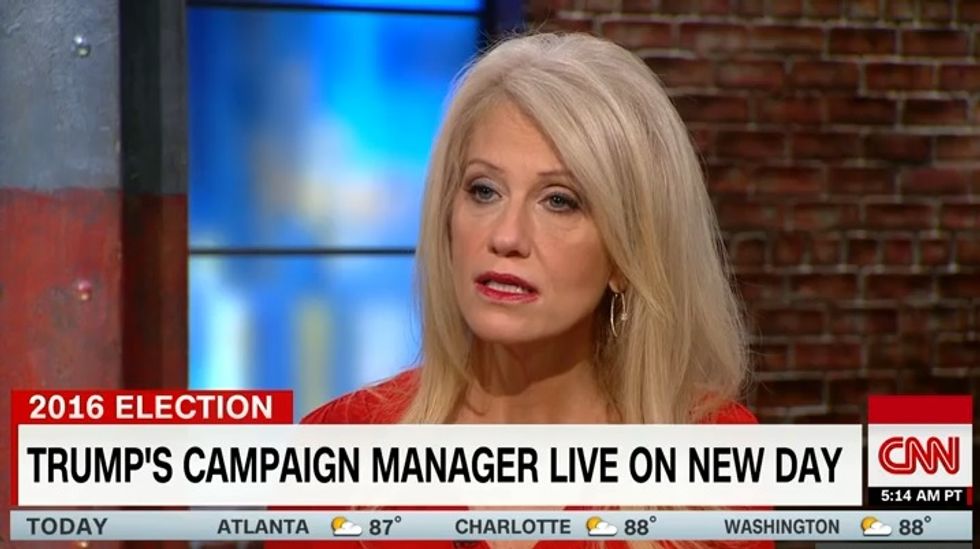 Donald Trump's campaign manager, Kellyanne Conway, was simply aghast Tuesday at the very idea that a so-called "journalist" would ask for proof of anything that Donald Trump asserts. On CNN's "New Day," anchor Alisyn Camerota truly offended Conway by not only asking when Trump would release his taxes (Answer: When his lawyer and accountant let him, because they're under audit. REAL answer: never), she then went and asked Conway, "Will Donald Trump release anything from the IRS proving that he's under audit?" The nerve of this Camerota person! Since when was it journalists' job to ask completely unfair questions about the reality of a serial liar's claims about his taxes?

"I'm sorry," Conway said, as Camerota repeated her question. "Are you calling him a liar?"

Why, yes. Given the fact that "Donald Trump lied about a thing" is repetitious almost to the point of being like "Airliner lands safely," any assertion Donald Trump makes needs to be backed up by documentation, especially if it's about Donald Trump's finances. So yes, since privacy laws prevent the IRS from saying whether anyone is being audited, then the only one who can prove he's under audit is the guy who got the audit letter. It's a point MSNBC's Lawrence O'Donnell has been making for months, most recently on Twitter Monday:

You'd almost think someone at CNN finally noticed O'Donnell's questions. Maybe more reporters will start asking! Back in August, Newsweek asked for proof of the audit, and got a copy of a letter from Trump's tax attorneys -- but no copy of the IRS letter.

Conway was very put out by Camerota's follow-up, asking why we should take Trump's word for it. After all, said Conway,

Good one! Because there's no way a doctor could prove Clinton has pneumonia, or that anyone could point to Clinton having a press conference. Totally the same thing. Besides, Conway insisted, nobody except liberal dum-dums in the press even cares about Donald Trump's taxes, and what the American People really care about is the economy, jobs, terrorism, and immigration, you silly media scum.

The topic of Trump's taxes came up later in the interview as well, because Camerota dared to suggest that Trump might not be the huge philanthropist he claims he is. Yes, she called him a liar again, which of course he is:

"Part of why people are calling for him to release his taxes is so we do know how much he himself has given to charity. Will you or the campaign release exactly what that number is?" Camerota asked.

"Why would you doubt it?" Camerota asked.

Poor Kellyanne Conway, always being badgered to answer questions about stuff the Trump campaign doesn't want you people to ask about. It is simply so unfair! Why won't the media suck up more to Trump, the way real reporters are supposed to do?

Middle Class Better Off Than It's Been Since Bush's Financial Crisis, THANKS OBAMA

We got all your SEXXXY ECONOMIC NEWS right here!

Hey, speaking of reporters badgering the poor oppressed Trumpers: Now that Lawrence O'Donnell's question has finally been asked by another reporter, maybe someone could badger the Trump campaign on another question about Trump's taxes, which as far as we know has only been raised by David Cay Johnston: Even if he won't release his taxes for the years he says are under audit, how about he releases his taxes from the mid-1980s to 2009, which aren't under audit at all? How come, Kellyanne? How come?