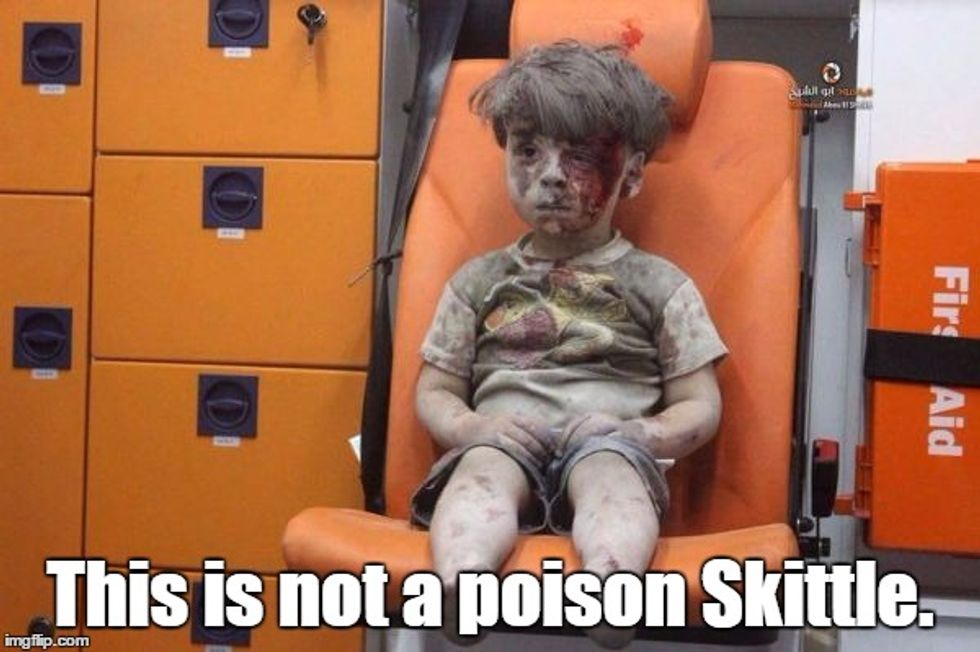 Oh, the backlash that came after Donald Trump's son, Fucksqueak Junior, tweeted out a hateful, racist meme about how Syrian refugees are just like a bowl of colorful Skittles: They're all chewy and sweet, but three of them are going to do terrorism to you until you are dead! Twitter made fun of Trump all day long, we learned that the guy who took that picture of Skittles is actually a refugee himself, and Wrigley, which makes Skittles, was like, "Yeeeeeeah, we really don't think this is appropriate."

The backlash was so intense that the Trump campaign finally had to respond, clarifying that YES, Syrian refugees are just like if there were some Skittles in a bowl, but three of them had been laced with actual poison, which means you might die if you either eat some of those Skittles or let in some Syrian refugees. And if you don't like that, well, you just can't handle the fucking truth:

[wonkbar]<a href="http://wonkette.com/606604/donald-trumps-idiot-son-says-dad-wont-release-taxes-because-then-everybody-could-see-his-taxes"></a>[/wonkbar]First of all, Donald Trump Jr. is not an asset to anything, so let's dispense with the notion that the dumbshit who tweets Alex Jones conspiracy theories and says the biggest reason not to release his dear daddy's tax returns is that it would make people ask questions about those tax returns, is useful in any way whatsoever.

And yes, Hillary Clinton wants to admit more refugees (BECAUSE IT'S THE BIGGEST WORLDWIDE HUMANITARIAN REFUGEE CRISIS SINCE WORLD WAR II, GODDAMMIT), but the notion that it's a "dangerous proposal" is only believable if you are a racist, mindfucked Trump supporter. We have a refugee screening process! It's detailed! It works! Also, as Samantha Bee explained in her excellent in-depth report on the refugee crisis, people who qualify to be resettled don't even get to pick which country they go to, so if you are a big scary ISIS and you're trying to sneak your way through so you can do Death To America, the refugee program is probably the last easiest way for you to accomplish that goal.

You know what? Fuck this. Two more things are going to happen in this post. The first one is we are going to post Sam Bee's investigative report, which is better journalism than much of anything the corporate media has hacked up in the last decade:

Secondly and lastly, we are going to repost Wonkette's Official Policy On Syrian Refugees, because dammit, this crisis isn't ending soon, and will extend LONG into the Hillary Clinton administration, during which we hope she saves as many of those people as she can, even if it makes Trump supporters do wet poos in their Depends for the rest of their natural lives. ESPECIALLY if it makes the Trump supporters do that. Fuck them sideways.

This post is over. Go to hell, Donald Trump, and take your little pipsqueak first-born son with you.