Trump Campaign Was Talking To Russian Intelligence Before The Election. Um, *SURPRISE*!!1! 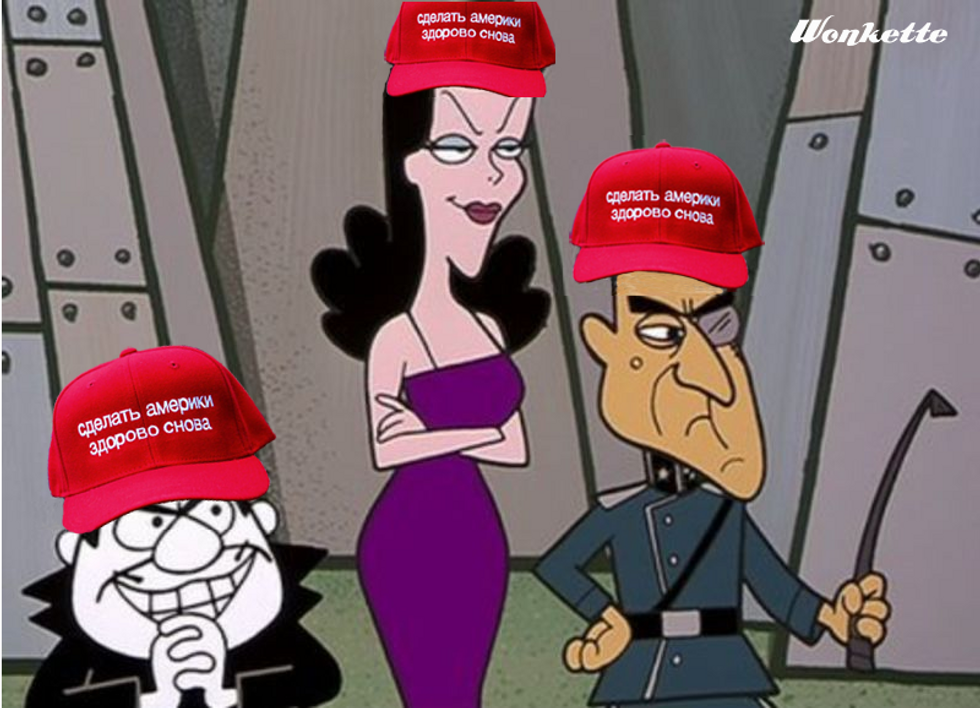 Just a day after Mike Flynn resigned as National Security Advisor following confirmation that he'd been making private foreign policy arrangements with the Russian ambassador before Donald Trump was actually sworn in as president -- which would be a big deal under any other president, but is just another day in TrumpLand -- the New York Times reported Tuesday night that "four current and former American officials" had confirmed that members of Trump's 2016 election campaign were in contact with senior Russian intelligence officials all during the year before the election. At the same time Trump was saying just the nicest things about Russia, and wishing aloud that maybe the Russians would do him the favor of stealing Hillary Clinton's emails.

Not to worry! This is not a big deal, because doy, it's Trump, and also totally not true, said the Tweeter in Chief:

Don't pay attention to the reporting, be outraged that the reporting is happening, OK? Three of the officials who spoke to the New York Times said the contacts between Trump people and Russian intelligence were discovered around the same time American intelligence was discovering evidence that Russia had been hacking the DNC and the Clinton campaign, which for some reason, back in those days when we were less carefree about Russian interference in American elections, seemed like it might be a big deal. So, what's confirmed here? Says the Times,

The intelligence agencies then sought to learn whether the Trump campaign was colluding with the Russians on the hacking or other efforts to influence the election.

The officials interviewed in recent weeks said that, so far, they had seen no evidence of such cooperation.

But the intercepts alarmed American intelligence and law enforcement agencies, in part because of the amount of contact that was occurring while Mr. Trump was speaking glowingly about the Russian president, Vladimir V. Putin.

See, they were just a bunch of nervous nellies jumping to conclusions! Isn't the real scandal that we're learning about this thanks to leaks? Yes, yes it is.

[wonkbar][/wonkbar]So far, the only Trump campaign person the officials have identified is Paul Manafort, who was briefly Trump's campaign manager before he had to resign because of "reasons" when Trump brought in his new crew of Steve Bannon and Kellyanne Conway. Other members of the campaign and people associated with Trump are also being investigated, though no names are being released in this latest report. Previously, the Times had confirmed ongoing FBI investigations of Trump pals Roger Stone and Carter Page, as well as Manafort.

The call logs and intercepted communications are part of a larger trove of information that the F.B.I. is sifting through as it investigates the links between Mr. Trump’s associates and the Russian government, as well as the hacking of the D.N.C., according to federal law enforcement officials. As part of its inquiry, the F.B.I. has obtained banking and travel records and conducted interviews, the officials said.

The Times also points out that the Trump campaign people's contacts with Russian intelligence were discovered as part of the monitoring of Russian communication that the National Security Agency routinely scoops up, and then after that, the FBI started looking through all the Russian communications the NSA had previously collected but not yet analyzed.

Paul Manafort says it's all hooey, because no way would he ever be in contact with Russian intelligence, heck no! Not that he'd know, he added:

“This is absurd,” he said. “I have no idea what this is referring to. I have never knowingly spoken to Russian intelligence officers, and I have never been involved with anything to do with the Russian government or the Putin administration or any other issues under investigation today.”

He added, “It’s not like these people wear badges that say, ‘I’m a Russian intelligence officer.’”

How true this is! It's all just one big glorious coincidence, and probably best if we just forget it and get on to the important business of Making America Great Again, while also vigorously prosecuting the leakers and cracking down on the failing New York Times and Washington Post.

[wonkbar][/wonkbar]The officials who talked to the Times -- shame on them, remember -- said the FBI is also trying to assess the dossier that was leaked to multiple media sources as well as delivered to the the FBI by former British intelligence agent Christopher Steele, who also was interviewed by the FBI about his sources. (Steele himself has since gone into hiding.) So far, the dossier's claims of close cooperation between the Trump campaign and Russian intelligence have not been verified, although CNN reported last week that signals intelligence had at least confirmed that several conversations between Russians mentioned in the dossier had been confirmed on the dates the dossier said they took place. The new Times reporting adds that one U.S. law enforcement official says the FBI had contacted some of Steele's sources, though the report doesn't say any more than that.

So, now there's going to be a big Congressional investigation into all this, right? Or even better, an independent, bipartisan investigation done by outside experts, like the 9/11 commission? Oh, heavens, let's not get ahead of ourselves! The Republicans really want an investigation of all these darn leaks, which are the worst thing ever and are really dangerous, although the substance of the leaks is really not all that worth talking about. And probably John McCain is going to make a big stink about it, too, because he still isn't convinced that Russia is the neatest ally we could possibly have interfering with our elections. Not surprisingly, a number of Democrats seem to think an investigation of Trump campaign connections to Russian intelligence just might be a big freakin' deal, like Hillary Clinton's campaign manager, Robby Mook, who Tweeted thusly:

Huh! That's a really good question! On MSNBC Tuesday night, Rep. Elijah Cummings, the ranking member on the House Oversight Committee, said he didn't find the New York Times report terribly surprising, and said that since the news of Michael Flynn's contacts with the Russian ambassador came out, he'd heard from several Republican House members who say they may join his call for an independent commission on the Russian election hacks and whether the Trump campaign colluded with the Russian government. So that would really be something, wouldn't it?

Don't expect too much public enthusiasm from Republicans for a larger investigation just yet, though. As far as Jason Chaffetz, the chair of the Oversight Committee, is concerned, there's nothing to look at, now, since Flynn has resigned:

"I think that situation has taken care of itself. I know that the Intel committee is looking into the hacking issue," Chaffetz told reporters.

So, how about the house Intelligence Committee, then? Rep. Devin Nunes, the Intelligence chair (and purely coincidentally, a member of Trump's transition team), certainly wants some answers, damn it. Unfortunately, he wants answers about why the FBI was looking at Mike Flynn's calls to the Russian ambassador, not about why the Trump campaign was in such close contact with Russia:

I expect for the FBI to tell me what is going on, and they better have a good answer [...] The big problem I see here is that you have an American citizen who had his phone calls recorded.

As it turns out, Yr Editrix herself already explained this in little words so Nunes can understand them:

Good to know we've got top men on this. Top. Men.

Don't forget: your Wonkette is ad-free and supported by Readers Like You. Hop to, bitches!