Trump's Jesus Advisor Will Resurrect Your Dead Relatives For Low, Low Price of $1,144! 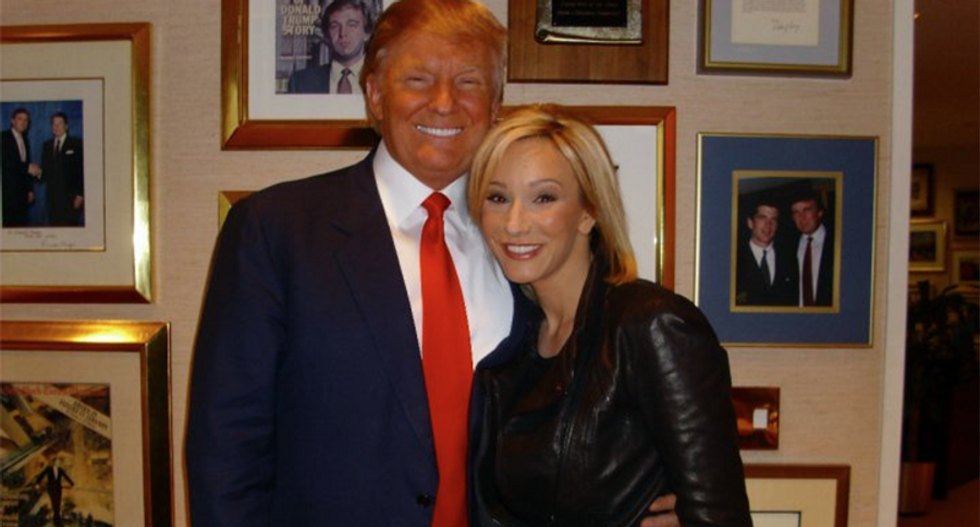 Perhaps the strongest evidence that Donald Trump may be slightly more cynical about religion than he claims to be is the fact that the religious advisors he has chosen to surround himself with are the absolute most batshit kind out there. He's not even just going with regular old Jesus Freaks, he's going with ones who say they can stop tsunamis with their minds. You know, the kinds of people you would probably only say were a good representation of Christians as a whole if you were making fun of Christians. It's pretty clear that his thing here is "OH, these people are crazy, so I will pick the wackiest Christian advisors I can find, and then they will think I am the greatest."

Paula White is the lady what put together Trump's Evangelical Advisory Committee. Reportedly, she is also the one responsible for leading Trump to accept Jesus Christ as his personal savior. Which is not surprising, since they have a lot in common, in that they are both really into scamming people for lots of money!

Naturally, she is a televangelist -- the kind of televangelist that is into the whole "prosperity gospel" thing. This means that she asks you for money and tells you that if you give her money, that God will be all like "Good job, you!" and then you will win the lottery or something. Which definitely is not any kind of scam at all! Also I have some land to sell you in Florida!

She's gotten into some trouble for this before.

But what makes this lady special, in a sea full of Creflo Dollars and Joel Osteen? WELL, she has got a special and unique product! A RESURRECTION SEED. A magical bean of some kind, which will resurrect you or your dead relatives, or something! On Easter! Just like JESUS! And it only costs $1144 dollars!

White then revealed to her audience that she didn't normally request a specific amount in monetary donations but said God was very specific about the amount required for the so-called resurrection seed.

"There's someone that God is speaking to, to click on that donation button by minimizing the screen. And when you do to sow $1,144. It's not often I ask very specifically but God has instructed me and I want you to hear. This isn't for everyone but this is for someone. When you sow that $1,144 based on John 11:44 I believe for resurrection life," said White.

I have no idea what any of that even means, quite honestly. Does she want people to be zombies for Jesus? Is this like a hypothetical resurrection, or are we talking about actual dead people coming back to life? Does she send you the seed and then you plant it in the ground near someone's grave and then they pop out of it or something? Are they hungry for brains when this occurs?

Anyway, for those of you who can't afford to purchase immortality for $1,144, because you've got bills to pay and whatnot, Paula will also take smaller amounts of money from you, if you so wish! She will also take donations of $144, $44 dollars! Which is very nice of her!

“There’s someone that God is speaking to, to click on that donation button by minimizing the screen. And when you do to sow $1,144. It’s not often I ask very specifically but God has instructed me and I want you to hear. This isn’t for everyone but this is for someone. When you sow that $1,144 based on John 11:44 I believe for resurrection life. You say, Paula, I just don’t have that, then sow $144. I don’t have that. Sow $44 but stand on John Chapter 11:44.”

“There have been times that I have taken prayer cloths that have been anointed as a point of contact. I put them in my loved one’s sneakers, I put them under their bed. I put them on parts of my body that I believe God for healing,” White explained.

It is an all purpose magic rag (I wanna call it a "Magic Mopeen" because it sounds catchier, but probably no one would know what I was talking about), that you can just rub all over your person, and it will cause you to experience "miracles, signs and wonders!" And, conveniently, if one of those miracles, signs or wonders is the stigmata, you are well prepared because you already have a rag on you to clean yourself off before you get blood all over the carpet!

Now sure, you are probably thinking that Paula White, Trump's special Jesus Advisor, is not on the level. That she is a con-artist. Or, perhaps, just a small town girl, living in a lonely world. BUT, you should know that she is married to a dude from JOURNEY, who is not Steve Perry. And you know what Journey always says, is "Don't Stop Believin'!" Because if you don't stop believin', then you can hold on to that feeling, people, streetlights, whoooo-aaaa-oh. And, also, if you come to her with Open Arms, and put magical prayer cloths on said arms, and also give her lots of money, then she and God will heal you. Or something!

But yes, this lady -- who, by the way, has very flat hair for someone who is both a televangelist and a Journey groupie -- is Donald Trump's favorite Jesus person, and probably her magic beans and dishrags are going to miracle him into being president, so I guess we should be very worried or something.