Trump Could Do Worse Than Secretary Of Defense James Mattis. In Fact, It's Shocking He Didn't 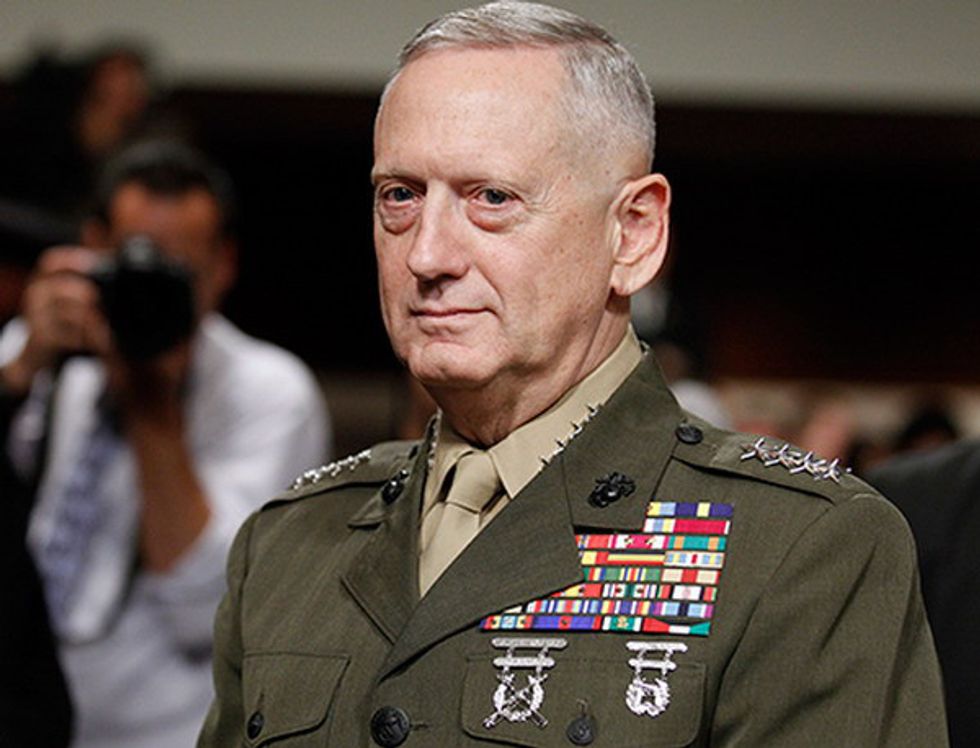 So, about that whole 'civilian control of the military' thing...

At his Great Big Campaign Rally Without A Campaign in Cincinnati Thursday, President-elect Donald Trump confirmed he'd chosen retired Marine Corps General James N. Mattis for his secretary of Defense, pretending it was some kind of secret: "We are going to be announcing him Monday of next week...Keep it inside the room." Oh, that kidder! Compared to some of the lunatics Trump has chosen for his cabinet, Mattis seems like a pretty decent, smart guy, who may in fact turn out to be entirely too intelligent to fit in well with the Trump crowd.

According to this thoughtful profile of Mattis by defense analyst Erin Simpson, Mattis is a truly legendary general in the Marines, a consummate war fighter who Trump likes to call "Mad Dog Mattis," but whose other nickname is "the warrior monk." In short, Simpson says, he may be too good a general to be an especially good bureaucrat. She sees three main issues: 1) SecDef is supposed to be a position held by a civilian, and Congress would have to pass a special law to allow a former general to serve in the position. The last time it did that was in 1950, for George C. Marshall, and at the time, Congress said it never wanted to do that again, because we are not a banana republic under military rule. B) Great generals don't usually make great bureaucrats. As Simpson puts it, "The Pentagon is one of the world’s largest bureaucracies, and Mattis has shown little patience for management and administration." She goes on to say, "The point is not that Mattis is unqualified. Rather, the point is that he hates this shit." And III) Mattis may not be a very good fit with a president who doesn't like to hear opinions that he doesn't already approve of. This one could be arguable -- as that indispensable Slate piece we keep linking to points out, Trump tends to agree with whomever he's talked to last, and Mattis has already done a great service to human rights by telling Trump he thought waterboarding (and worse!) is fairly useless:

He said, ‘I’ve always found, give me a pack of cigarettes and a couple of beers and I do better with that than I do with torture.’ And I was very impressed by that answer. I was surprised, because he’s known as being like the toughest guy.

Sure, Trump went on to say he hadn't necessarily changed his mind about torture, but if he believes Mattis is the second coming of George S. Patton (an unintended insult to Mattis, surely), then let him believe that. But Mattis may not be enough of a toady to play well with the Trumpsters. We're inclined to hope he might serve as a control rod against some of the crazier elements on Team Trump, particularly since with his four stars, his very existence might make retired three-star Army Lieutenant General Michael Flynn pout. Trump's horrible choice for National Security Adviser reportedly reportedly didn't want anyone who outranked him to be working in the Trump administration.

Another thing we like about Mattis: He takes laws and regulations against torture seriously, and was one of the commanding officers who reviewed the misconduct charges against then-Lt. Col. Allen West, who was accused of firing a gun next to the head of a blindfolded Iraqi prisoner during an interrogation. Mattis wrote of West's behavior, “this shows a commander who has lost his moral balance or watched too many Hollywood movies.” Also, unlike the president-elect, who doesn't read anything but Twitter, Mattis is phenomenally well-read, and, says top-notch defense writer Thomas Ricks, "prepared a reading list for his officers before deploying to Iraq in 2004 and required that it be studied." He might bring a much-needed voice of sobriety and thoughtfulness in the middle of the Trump administration's junior high school student body. We strongly recommend you go read Ricks's profile of Mattis; he describes the general as “a tough-minded realist, someone who’d rather have tea with you than shoot you, but is happy to end the conversation either way.”

Mattis's reputation for toughness seems to be what appeals to Trump. Here's hoping that if he's confirmed -- and it really is going to take Congress passing a law to allow him to serve -- his tendency to not go roaring into every fight like a screaming idiot will help bring some realism to the toadies and hotheads Trump likes to surround himself with. Trump likes that Mattis is called "Mad Dog," but may be disappointed to find he's no lap dog either. Our main fear is that Mattis might be entirely too bright for Trump to even appreciate him.