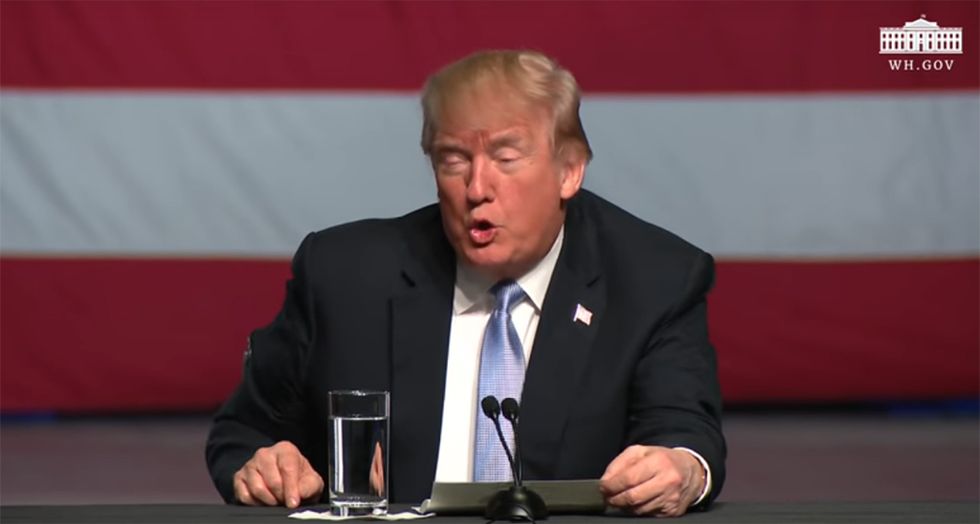 Did you hear? Presidente Naranja is going to force the big bad pharma companies to let sick folks get access to their life saving meds, even before the drugs are approved by the FDA. This is the "Right to Try" legislation he signed into law last week.

“We will be saving — I don’t even want to say thousands, because I think it’s going to be much more. Thousands and thousands. Hundreds of thousands. We’re going to be saving tremendous numbers of lives," said man who never exaggerates. Not about crowd size, hand size or anything.

What a bold move by a guy everyone thinks only does things that benefit himself or his chromosomally challenged brood. See! Pharma lobbying doesn’t matter to him. He just wants babies to be healthy and happy. He’s for the people. Or is he? Let’s dig into the legislation a bit shall we?

First off, where did this idea come from? Well, it came from the Goldwater Institute, a libertarian think tank based in Arizona and funded by Sith Lords (Koch Brothers). Warning bells yet? Critics of the law (and state versions that were already on the books before the federal one) believe that the motivation for the institute pushing the legislation is really to bypass the FDA. Makes sense, since libertarians dislike regulations like Trump dislikes a natural skin tone.

The new law actually does very little. Before the law, a terminally ill patient could ask the FDA to contact a pharma company and request access to an experimental drug that could potentially benefit them. This would be in a case where the drug was already in human clinical trials, but for some reason, the patient didn’t qualify for a trial. In rare cases (~1% of the time), the FDA declines to ask the company because of safety concerns. Sometimes the pharma companies agree, and sometimes they don’t, as it’s a complicated issue. Point is, they aren’t obligated at all to provide the drug. More on that shortly. So, what changes with the law? Are they now obligated to do so? As Kanye would day, nopety, nopety, nope, scope, nope. All the law does is allow patients or family members to petition the drug company directly without going through the FDA. Remember, libertarians hate regulations so sidestepping the FDA gives them Ayn-Randian-mini-boners.

But Carlos, why wouldn’t pharma companies want to give their lifesaving drugs to terminally ill patients who have no other options? Thank you for asking. It’s because the industry I work in is evil and only cares about profit. NOOOO! That’s not why, but when you have my old employer, Novartis, paying $1.2 MM to get access to Trump, well that doesn’t help our image much. Most of you know, but in case you don’t, to get a drug approved it typically goes through three phases of clinical development, cleverly named “phase 1,” “phase 2,” and “phase 3.” Sometimes we use Roman numerals if we’re feeling fancy. This is after all the early research and animal work is finished. In a nutshell, phase 1 is safety testing where you slowly increase the dose of the drug, looking for side effects. If the drug passes this phase, and only 10 percent do, then it goes to phase II (felt a little fancy) where it’s tested for signs of efficacy. Usually, but not always, phase 1 is done with normal human subjects and phase 2 with the actual patients you hope to treat. Phase 3 follows and is basically similar to phase 2 but with bigger patient numbers and designed so that if the drug works how it’s envisioned, the statistics will bear that out.

“Right to Try” lets patients ask for experimental drugs after phase 1 and safety has been “established.” Why the quotes there? Because safety isn’t fully established in phase 1. There can be rare and life-threatening side effects that don’t show up until the drug is dosed in a larger population. Often times, the request for an experimental drug is to treat a child and phase 1 is almost always done on adults with pediatric trials following later in development. So what, you say? A terminally ill patient doesn’t care about potential side effects since they have no options! Well, sometimes that’s true, but if the drug isn’t going to help and only makes the patient’s last few months of life even more agonizing and painful, that’s a bad thing. Of course, that’s a personal choice.

There are other reasons why it can be a problem to provide experimental drugs outside of clinical trials. Patients in trials are very well-monitored and all data about them and how the drug is working (or isn’t) is captured. In a compassionate use setting, that’s more difficult. Again, the safety thing, but also potentially a public relations fiasco for the pharma company. Imagine a situation where a child gets an experimental drug and dies from some unknown cause NOT related to the underlying disease. If the patient had been in a monitored study, it would be easier to judge if the adverse event was related to the drug or not. It’s less easy in the compassionate use setting. Regardless, now the news is out there that a patient died while taking the drug. Situations like this have led to the FDA putting a clinical trial on hold until an investigation is completed. Slowing down development of a potentially life saving drug is obviously a bad thing.

I was involved in a situation where we were just kicking off phase II (feeling fancy again) of an oncology drug that had potential use in some rare cancers. We got a request from a family via the FDA to get access. Ultimately, we did provide the drug, but it was a tough decision. We were having manufacturing issues (it was a tough molecule to make!) and were already nervous about having enough drug for the clinical study, let alone requests outside of that. We also considered the ethical question of providing drugs to this request but potentially not others if the supply became tight. In the end things worked out and we didn’t have any shortages. The terminally ill patient got access and we completed the study. Unfortunately, as is often the case, the drug didn’t show efficacy in the study and that was the end of the program. Did the compassionate use patient get benefit? Hard to say.

So, back to the legislation. Trump signed a law that allows him and Congress to take a bow for pure window dressing. Terminally ill patients already had a way to ask and often get access to experimental drugs. Nothing changes other than the FDA can be bypassed (bad idea) and some swampers wearing ties get to do photo ops with sick kids. If they care so much about kids, how about not separating the brown ones from their families and putting them in holding cells? How about a “Right to Try” legislation focused on helping immigrant kids and their families try the supposedly great American way of life?