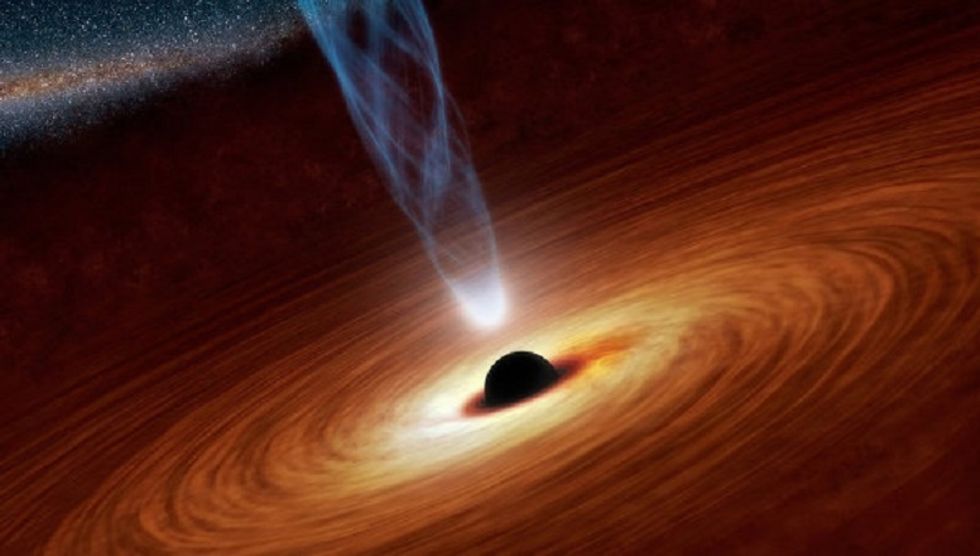 Scientists studying the Trump Event Horizon have not been allowed to publish their results.

So here's a thing that appears to be happening: A whole bunch of government agencies -- maybe all of them? -- are subject to a gag order by the executive branch. It started over the weekend when the Interior Department was told to shut its big treehugging pie hole after the National Park Service tweeted a comparison of the crowds on the Mall at the 2009 Obama inauguration and Friday's Trump inauguration. Then the EPA was told Monday that it could no longer issue grants, press releases, or social media communications. Buzzfeed reported Tuesday morning that the Department of Agriculture had been barred from releasing any information to the public. And then shit got really weird!

According to Sam Stein and Kate Sheppard at Huffington Post, a broad swath of federal agencies have told employees to "cease communications with members of Congress and the press," effective immediately. Details? Sure, though apparently nobody's allowed to offer any details:

Officials at sub-agencies of the Department of Health and Human Services, for example, have been told not to send “any correspondence to public officials” according to a memo shared with HuffPost. Instead, they have been asked to refer questions to agency leadership until the leadership has had time to meet with incoming White House staff about the new administration’s policies and objectives, according to a congressional official who was also informed of the communications freeze.

An official with the National Institutes of Health told HuffPost after the initial publication of this piece that an email had been sent to the directors of NIH institutes and centers providing guidance from HHS on how to handle new or pending regulation, policy or guidance.

“The HHS guidance instructs HHS Operating Divisions to hold on publishing new rules or guidance in the Federal Register or other public forums and discussing them with public officials until the Administration has had an opportunity to review them,” the official said.

It’s unclear how wide the freeze goes, however, as an official close to the Centers for Disease Control and Prevention said that agency was unaware of any such freeze.

This doesn't look good, kids. At a White House briefing Tuesday, spokesbot Sean Spicer said he didn't know nothin' 'bout no gag orders. Asked about the ban on EPA communication, Spicer got right down to the nitty:

“I don’t know, Spicer said. “That story is literally breaking while we were entering the briefing room. We’re looking into it.”

Could be nobody's allowed to tell him about it. So maybe the administration simply wants to make sure there aren't any embarrassing slips like that mean Tweet from the Park Service, right? Huffpo says Myron Ebell, the climate-change denier in charge of the EPA's transition planning, said the communications and grant freeze at EPA was simply put in place to "make sure nothing happens they don’t want to have happen." REASSURING, ISN'T IT?

But the communication freeze appears to go well beyond merely stuff that might be controversial. Washington Post reporter Danielle Paquette tweeted earlier this afternoon:

Huh. Sure making American exporters great again there, huh? Can't wait to see this month's employment figures. If we get them.

Stein and Sheppard point out that this isn't merely a matter of keeping embarrassing information out. By apparently gagging all federal agencies, people are going to be hurt, because a lot of what the federal government does is all about getting information to citizens:

sources on Capitol Hill said they are worried about the timing of the directive. Lawmakers routinely help constituents to interface with federal agencies, especially those that fall under the HHS umbrella. If officials who deal with Medicare and Medicaid policies aren’t allowed to talk to members of Congress, one Hill aide noted, it will be impossible to address constituent concerns with those programs.

Additionally, this year’s Affordable Care Act enrollment continues until Jan. 31 and runs largely through the Centers for Medicare & Medicaid Services, which falls under HHS. If constituents have questions about coverage options, the aide noted, the communications freeze may make it impossible to address those issues.

We should add that the HuffPo story may not be definitive -- there's a lot of information yet to be nailed down yet, so let's try not to panic too much. Government accountability nonprofit the Sunlight Foundation has started a list of agencies that have been subjected to a gag order, and we're afraid it's likely to get longer. [Update 8:45 PM: In less than five hours since we wrote this post, that list has gone from three to six agencies.]

The difficulty, as Masha Gessen warned us weeks ago, is knowing that the autocrat is quite happy to subvert institutions and make information unreliable. We already know this is Trump 101, from crowd size to claims of massive vote fraud to economic statistics. There's no reason to think the Trump administration won't insist on making sure all government information is "corrected" by his political apparatchiks.

As for institutional resistance, Think Progress's Judd Legum found evidence that someone at Badlands National Park plans to go down fighting:

We're sure someone from the Heartland Institute can be found to replace that troublemaker and assure us that there's still no scientific consensus on such nonsense.

Update: The Badlands NPS Tweets on climate were deleted late this afternoon. Welcome to the new abnormal. Call your Congress members and tell them this is not how America works.

Or, for that matter, the NASA/NOAA report it links to. Doubleplusungood Refs Untopic Rewrite Fullwise.

[Thanks to alert Wonkette Operative "boyblue123" for the tip]