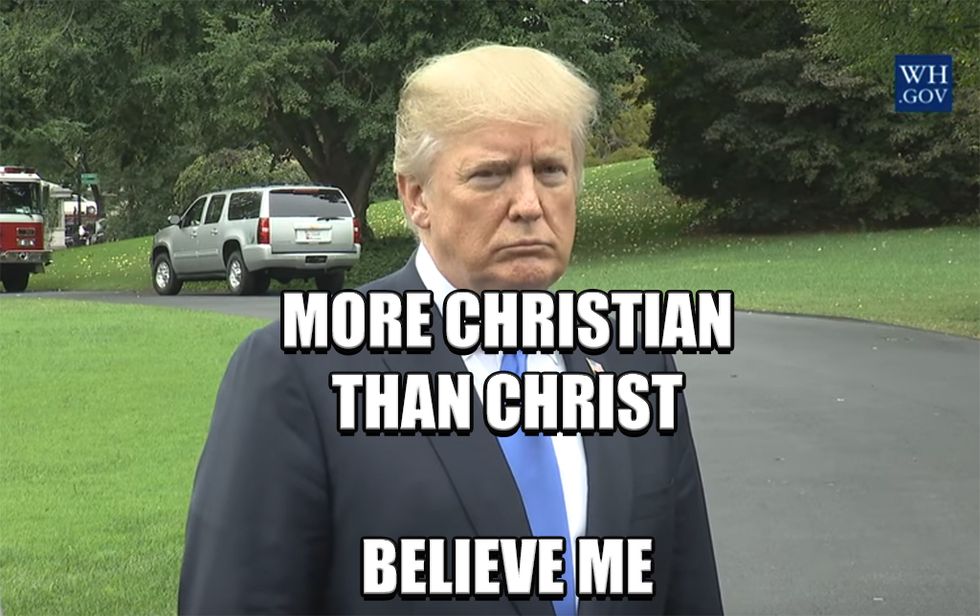 Good Monday, Wonketariat! We have ALL THE NEWSES today, so here's some of the things we may be talking about!

The Tea Party crazies are driving the deficit hawks stark raving mad as they continue to push some Reagan-esque fantasy that massive tax cuts for the wealthy will magically make trillions of Ameros.

Idaho Republican Senator Mike Crapo is releasing a series of crappy cons in a local newspaper to trick poors into supporting tax cuts for rich people. DID YOU THINK YR WONKETTE WOULDN'T NOTICE?

Trump's chief economic egghead has been hitting the road with selective evidence to boast about the beauty of trickle down economics while the Treasury Department hides studies that disprove this exact type of scam.

Steve Mnuchin is actually admitting that the so-called "estate tax" (thing that only affects the spawn of the super rich) "disproportionately helps rich people," before pivoting again to heap horseshit upon the graves of farmers.

It's hard to find what gives Trump such a hard on for coal, but he's certainly getting a lot of reach arounds from super rich factory owners and coal fetishists on K St.

The opioid epidemic in America is the fault of several congress critters who let big pharma lick their balls for shitloads of cash, but nobody is worse than PA Rep. Tom Marino, Trump's pick to fight opioid abuse.

White House aides apparently spend their days running around jerking off Trump in a desperate attempt to keep him from losing his shit (again).

Jeff Sessions's Justice Department is actually sending a decent lawyer to Iowa to prosecute a hate crime against a transgender teen who was killed last year. No shit!

Where oh where is Wilbur Ross's missing $2 billion Ameros, and why oh why didn't he disclose all that money until some nosey reporter bothered to ask? Is that a crime? (Yes, yes it is.)

REXXON isn't denying that he called Trump a "fucking moron," but he is pivoting to all the bombs we're about to drop on Not America.

Even though it's against his master's best wishes, John Kelly is trying to fill all the holes in the federal government that Trump's left open since his coronation inauguration.

Someone over at Axios was greasing the bologna pony (AS USUAL) with some dumb-ass story about Trump criticizing SCOTUS Justices' health, and how many he'll appoint. Seriously, Jonathan Swan, it's REALLY dangerous to shove your nose so far up so many asses.

Democrats have turned the page in the GOP playbook and are set to cast Paul Ryan as the demon du jour for 2018 in an attempt to unseat vulnerable Republicans.

Before opening for Trump, Mark Meadows, the leader of the Tea Party crazies, said he wants to "pull the trigger" on moderate Republicans for not being as batshit insane and gullible as the other idiots in their constituency.

Trump's speech at the Value Voters Summit was about what you'd expect from a sociopathic narcissist, but now he's apparently nü-Jesus, and he's going to shove Judeo-Christian MAGA Christmas crap down our throats.

While waggling his whiskey dick at the Value Voters Summit, Steve Bannon said he didn't start "the war" against the GOP (even though he literally "declared war" on the GOP two weeks ago) but he threw every moderate Republican he could think of under the derailed Trump Train, and then underhandedly threw Trump as well.

Some self-identifying "Value Voters" felt it necessary to pass out fliers on the "hazards of homosexuality" for all the other Republicans hiding in the log cabin.

Democrats are putting all hands on deck in Florida for Sen. Bill Nelson ahead of a likely challenge from Republican Gov. Rick Scott and his mega-millions.

Missouri Republicans are eyefucking Attorney General Josh Hawley after he sat down for a secret meeting with former President Bannon and the Koch Brothers to talk about how best to fuck all the poor, and black, and poor black people after unseating Democratic Sen. Claire McCaskill.

According to the FBI, Eric Kreig was mad about losing a defamation suit, so he mailed a pipe bomb so that everyone would know just how angry he was. Good thing he didn't win election for Indiana's Lake County councilman and surveyor.

If you live in middle, rural or relatively poor parts of America that were ruined by Wal-Mart, you probably shop at dollar stores because it's literally the only option.

Some science bozos are suggesting that California is more likely to burn to the ground before a massive earthquake can swallow and separate LA.

Nikki Haley was on teevee telling everyone that scuttling the Iran nuclear deal is all about fighting North Korea, which is funny since both countries are separated by about 4,000 miles of desolate mountains and cities.

Why is North Korea so deeply entrenched in cyber warfare? Aside from the fact that it's cheap, it's easy when your entire government is run like the mafia.

Police in Dubai now have hoverbikes. You're welcome, America.

Don't believe the hype. No, there is no "antifa civil war" being planned. That was some stupid 4chan/Breitbart bullshit.

Silicon Valley is whispering sweet nothings into ears on the Hill ahead of a draft bill to regulate political speech on the Internet.

Conspiracy theorists are fashioning their tinfoil hats and rearranging their parents' basements to make room for the CIA's JFK papers that are set to be released before the end of October.

The Bible Museum being built in DC is a bigger shitshow than you can possibly imagine. It's from the same creepos who financed Ken Ham's Creation Museum, and the Vatican wants nothing to do with it.

Later today, that guy who walked off the military base in Afghanistan to be the subject of that sad second season of Serial, Bowe Bergdahl, is expected to plead guilty to being a reckless dick, and that's running military law experts in circles.

Did you know that Twitter likes neo-Nazi Richard Spencer more than it likes ladies trying to defend themselves against fat-shaming trolls? You stay classy, Twitter.

And here's your late night wrap-up!

And here's your morning Nice Time! A baby pygmy hippo!

We're supported by readers like you! So give us money, and we'll keep giving you all the news briefs and nice times we can!