Trump Did His Kid's Russia Homework! Wonkagenda For Tues., Aug 1, 2017 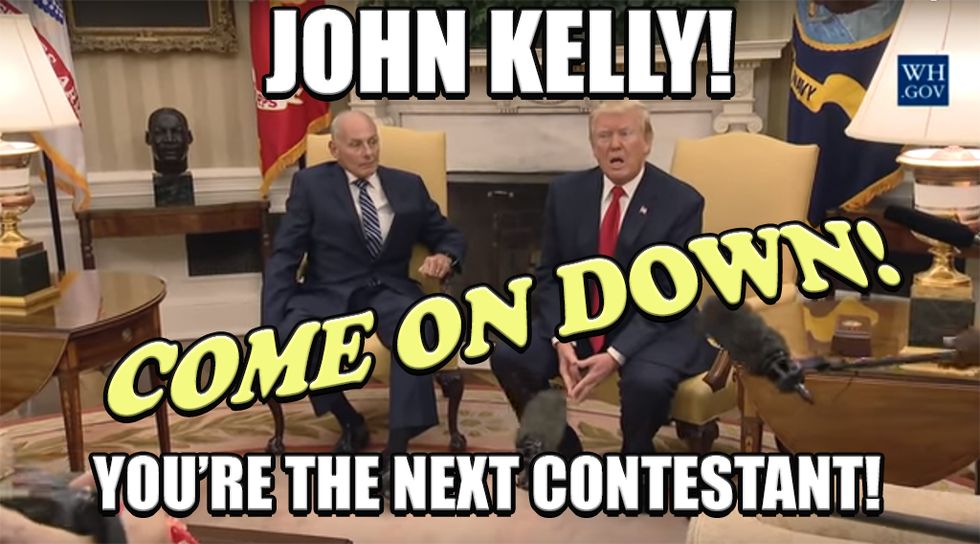 Senate Republicans are done with healthcare and moving on to tax reform, but it looks like Sean Hannity didn't get that memo.

Lindsey Graham and Bill Cassidy have their own healthcare plan that essentially gives desperate states some fancy band-aids with VCR instructions.

Obamacare keeps thwarting its naysayers and improving, but that isn't stopping some Republicans from bitching about all the poor people who need health insurance.

Bernie Sanders introduced a bill to mandate federally funded R&D pharmaceutical companies to make their drugs available at fair prices, and even though it doesn't have a catchy acronym, it's intended to make things like the Zika vaccine affordable for all the icky poors in Southern states with the most extreme risks from mosquito-born viruses. Thanks Bernie!

The White House's opioid commission has recommended declaring a state of emergency to address the opioid crisis, which is a pretty big damn deal considering the wide-ranging implications that would have in doctors' offices around the country.

It looks like a staffer from a House Judiciary Rep. crowd-sourced amendments into an investigation into Hillary Clinton from the Donald Trump sub-reddit, a most wretched hive of scum and villany.

Trump was only joking when he told a room full of cops to beat suspects under arrest according to Sarah Huckabee Sanders, but that sounds like CYA considering POTUS is under criminal investigation for colluding with a foreign power.

An email troll fooled senior members of the White House staff as recently as this weekend, causing severe butthurt and highlighting the stupidity of Trump's inner circle, as well as gaping holes in the White House's IT security.

Mitch McConnell is going balls-out down South as the House Freedom crazies and other insurgent Republicans make a push for Jeff Sessions's old Senate seat.

Conservatives are losing their shit about a former staffer for Debbie Wasserman-Schultz who was arrested for bank fraud, seeing as they have literally nothing better to do with their lives.

Another former EPA official is opening up about the state of the agency under Scott Pruitt, stating that she felt is was her "civic duty to explain the impact of this administration’s policies on public health and safety." :(

A judge has ruled that a suit against two CIA psychologists who gave the go-ahead on torture can move forward, but the judge is urging both parties to "sit down and reach a reasonable conclusion."

A US district judge will hear arguments in a case on Trump's voter commission and whether or not it violates the Privacy Act of 1974, seeing as how is sure as hell seems like it's a tool to slap down people who didn't vote for Trump.

GOOD NEWS: A federal court has derided the bogus evidence used by the the FAA in the "Incredible Shrinking Airline Seat," stating that it has allowed airlines to create potentially dangerous conditions in the most unfriendly skies.

Prosecutors are now facing legal and ethical conundrums when dealing with illegal immigrants as a conviction for minor offenses could easily expose them to deportation rather than simple jail sentences.

Federal judges won't make North Carolina hold special elections before November 2018, but they are making the legislature submit new maps that don't have all those racially gerrymandered districts by September.

Russia's fiercest Putin critic, Alexei Navalny, faces an uphill battle in the Russian presidential elections; step one is just getting on the ballot.

Mike Pence has been given the hand job of making nice with NATO allies, and now he's in Georgia (the country) just as Russia pushes its occupation force deeper into the country, further flexing what military power it has left.

The U.S. is imposing sanctions on Venezuela, declaring its elections a fraud as the country slips into dictatorship amid large protests, but those sanctions don't even touch their oil industry. In other words, we're sending them a mean letter letting them know how angry we are.

Poland's Defense Minister seemed to defend Putin during a parliamentary debate, and that's weird since he's made a career out of exposing KGB/Russian spies. This has led people to suspect that he's a double-agent, but then the story got weirder after Trump's European vacation.

Either Captain Kirk has been infected with a brain parasite, or William Shatner is a huge asshole who's ranting about social justice warriors, snowflakes, and misandry. Somebody needs a refresher course on Starfleet General Orders and Regulations. Hey, Shatner! GET A LIFE!

Alexandra Petri opines that things are getting biblical in Washington, and may Crom help the next person voted off the island.

Spicey popped up for just a moment to state his undying love for Mike Pence, and his hope that he'll run in 2024.

Eric Trump went on Hannity to wonder why his dad has to carry so much weight for the GOP, and we're positive that this is a sincere question, not a veiled fat joke.

Jeffrey Lord thinks there's no way Prince Jared and Princess Ivanka would EVER leak to the Washington Post. HAHAHAHAHAHAHAAHAHAHA

Jared Kushner pulled a bunch of Congressional interns aside and denied ALLEGED collusion with Russian operatives, stating, "we couldn’t even collude with our local offices." Kushner spoke directly to the interns under the assumption that the meeting would leak to the press.

Corey Lewandowski has been "You're Fired" from some half-assed "alt-right" network for his continued appearance on other cable news networks. Full stop.

Tomi Lahren wasn't the only minor media moran being an ass at Politicon this weekend; Cenk Uygur and Ben Shapiro held a "debate" which devolved into a shouting match with frog fetishists.

Somebody dubbed Mike Cernovich over the giant turd from "Weird Science," but we don't really see any difference.

And here's your late night wrap-up! Stephen Colbert sang a song for the Mooch; Jimmy Kimmel got a subscription to Trump junk; Seth Meyers took A Closer Look at "Reince Penis" and the chamber of leaks; The Daily Show pointed out that "retention deficit disorder" is the least of Trump's problems; and James Corden had dogs in sunglasses.

Help us out! Give us some Ameros with the clickys below!