Trump Didn't Say 'Israel' To Russians, YOU Said 'Israel'! But Yeah He Gave Russians Israeli Intel, Like You Said. 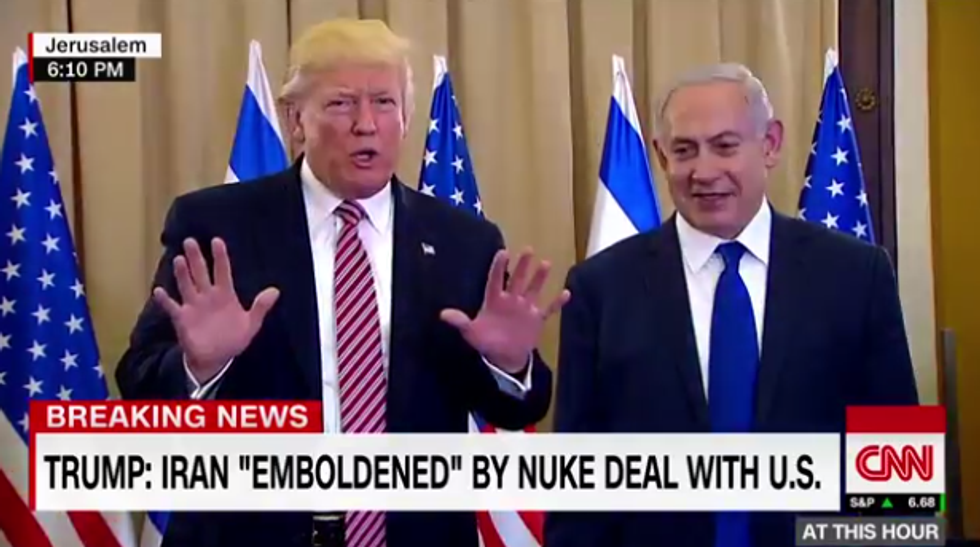 FIXED IT WITH HIS TINY HANDS

Good news! Donald Trump is currently in Israel because he is the president of the United States, and he has solved once and for all the controversy over whether he shared exclusive top secret NSFW code-word-level intelligence we got from the Israelis with his Russian BFFs in the Oval Office. His latest line of BS, which he delivered in a conversation with Israeli Prime Minister Benjamin Netanyahu in front of reporters (whom he hushed so the whole world could hear!), is that he totally gave the Russians the goods, but he didn't say "Israel," so no harm, no foul, right?

Here is the Trump quote:

Do you really need his actual quote? Pffffft, fine:

It's funny, because literally nobody has alleged that Trump got in the bathtub with his Russian friends, did a loud bubbly Trump fart and said, "Hello my Russian masters, I am about to share with you some secret ISRAEL things from the ISRAEL JEWISHES that are a secret, so when you tell the Iranians the secret ISRAEL STUFF, please don't say ISRAEL, even though I am saying ISRAEL right now." Slate notes that none of the original reporting remotely suggested Trump did that, but that the New York Times said Trump "provided enough details to effectively expose the source of the information and the manner in which it had been collected." A smart, non-Donald Trump person could figure it out, is what they were saying.

Hell, National Security Adviser Gen. H.R. McMaster, in trying to defend Trump, specifically said last week that Trump had no idea where the intel came from, presumably because the American intelligence community tries to keep the really sensitive stuff from Trump, because he can't be trusted not to pass info to his Russian overlords, AKA America's adversaries.

We learned late last week that the intelligence Trump spilled was the "Israeli" kind, but it should be noted that neither U.S. America nor Israel has explicitly confirmed this, though it's been reported that Israeli intelligence is pissed enough about it to say Yiddish cusses. But now that Trump has denied a thing he was never accused of, insisting that he didn't say "Israel" about the Israeli intelligence, he has basically confirmed it. Mazel tov!

Anyway, Israel and the United States are still best pals, right? Bibi Netanyahu sure seems to think so, saying during his meeting with Trump that "intelligence cooperation is terrific" and "never been better" between the two nations. Uh huh.

We're sure Mossad feels so much better now and will totally let this go.