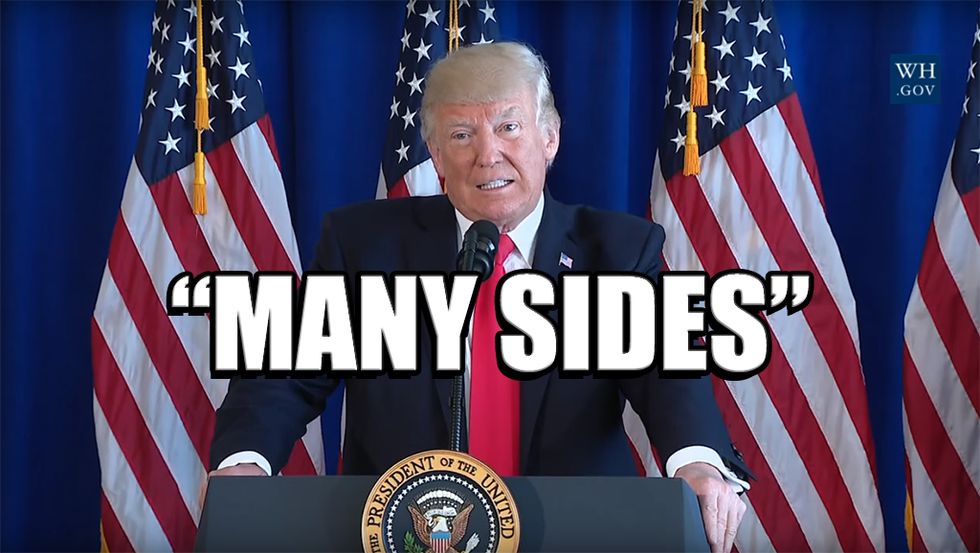 Good Monday Morning Wonketariat! We've got a bunch of things we're already working on right now, but here's some of the things we may be talking about today.

Trump's White House eventually updated its statement and mumbled a condemnation of "white supremacists, KKK, neo-Nazi's and all extremist groups" but neglected to attribute the statement to anyone in particular.

Mike Pence is pissed at reporters for criticizing Trump and his inability to single out hate groups, then repeated that "many sides" crap. This fuckin' guy.

States with failing health care markets are getting bailouts to the tune of hundreds of millions of dollars from the Trump administration in order to keep all the poor people from dying when they get the sniffles.

House Democrats want to use the debt ceiling to save ACA marketplaces, and back Republicans into a corner.

A number of federal agencies are quietly working to axe post-crisis banking regulations, like the Volker rule and the fiduciary rule, so that the poor besieged Wall Street bankers can make more money at our expense. [Archive]

Marijuana is a high priority for 2020 presidential hopefuls who hope to swing voters with favorable positions on bong hits.

It's not just Latinos who are stuck in legal quagmires from bad immigration policies as Vietnam war refugees fearing torture are being swept up in the dragnet.

The rumor mill on The Hill has it that Republican officials want Joe Manchin to heat of the Energy Department now that West Virginia's turncoat governor, Jim Justice, has come out of the Republican closet (again).

The "alt-right" is about to call HR McMaster an alocholic in their increasing attempts to get him "You're Fired" for not being a racist (just an apologist).

Senior White House officials and Tea Party crazies worry they won't be able get anything done during the next legislative cycle, like killing the ACA or passing tax cuts for the super rich.

Conservative Senate candidates are shitting on Mitch McConnell as if he were some kind of dirty dreadlocked liberal leading a two-tone ska band.

Disaffected Independents are starting to band together ahead of looming elections in fear that they might lose all their money if they label themselves.

Tom Steyer, a Democratic super-donor, has vowed to only throw Ameros at candidates who support abortion rights, feeling that there should be "litmus tests" for candidates and, "We are explicitly pro-choice."

The Mooch resurfaced this weekend and talked some shit about "that sort of 'Bannon-bart' nonsense," while making sure not to hurt Trump's fragile ego.

The border wall has made strange allies in Texas as environmentalists and angry hermits are now working together to stop the Tortilla Curtain.

A supervisor in Pima County, Arizona, Ally Miller, was so mad about the violence in Charlottesville, VA that she went on Facebook to say that she was "sick and tired of being hit for being white. It's all about making us feel like we need to apologize. I am WHITE [sic] - and proud of it! No apologies necessary."

A Tax Assessor in Lea County, NM, wants oil and gas companies to pay their taxes after an audit in an neighboring county found millions in unpaid property taxes, but she's fearful of the backlash from big oil.

The Joint Chiefs are urging diplomacy with North Korea, but they're also reminding everyone that we still have a lot of dusty old nukes that haven't seen sunlight in awhile.

A Venezuelan politician may have tried to assassinate Marco Rubio with Mexican nationals according to a DHS memo sent to law enforcement officials. WOAH if true.

North Korea may have been getting help from a Ukrainian weapons factory on the border with Russia, and now Russia, China, and North Korea are denying they ever made missiles, sold missile tech, or made pew pew noises with finger guns.

Sinclair Broadcasting has been working with Ajit Pai and the FCC to ease regulations so that it can gobble up local stations and indoctrinate tiny media markets with pro-Trump bullshit.

Russian hackers have been using stolen NSA software to infect computers connected to hotel WiFi, so consider this your regular reminder to be cautious when using free public WiFi.

You're not going to believe this, but Steve Bannon might be damn, dirty leaker, and that's made Trump super mad.

Bannon's White House rivals are praying that John Kelly will deliver them from evil as if he were some all-powerful figure that can keep Trump from shitting the bed every five minutes.

Trump has a new 2020 campaign ad that labels his "enemies" as Democrats, the media, and career politicians who keep thwarting his attempts to severely screw up America.

GoDaddy has given the Daily Stormer 24 hours to move its website to a new domain for violations of terms of service. Meanwhile, it looks like somebody hacked the Daily Stormer this morning in an apparent effort to troll and publicly shame the neo-Nazis. LOL.

And here's your morning Nice Time! A baby dik dik! They're even smaller than a regular dik dik! Remember, Wonkette's your home for political dik dik jokes!

Help us pay our bills with your money! We're fully supported by readers like you, like public broadcasting, but with more booze and baby pictures.