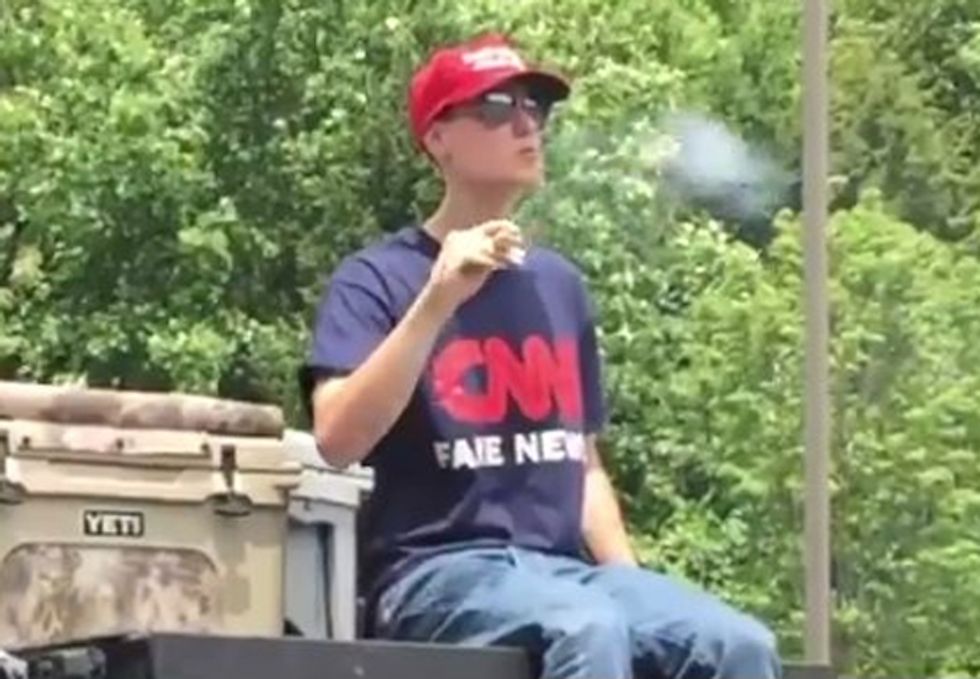 They say that music can channel the raw emotions of the oppressed, can serve as the voice of voiceless, the fence of the defenseless. They also say some people think Fox News is real. And so please, put your hands together and drop your jaw in amazement at "Fake News (The Enemy Of The People)" by the artist known as "Mint Chip." It's only a couple of minutes long, but seems so much longer!

It's got the best words:

They be screamin' "Russia!"

Even though it's a nothingburger

Cause they lost the election

CNN is the Clinton News Network

and they just can't accept it!

Time to face the facts,

Get your head outta your ass

We are tired of excuses,

Hillary is just a big-ass loser,

President Trump had to go against Hollywood and the Media

For them to blame Russia is supremely DUMB

The spread so many lies

But it didn't matter

They tried to moralize

But it didn't matter

And so on. God is on their side, and God helps Mint Chip bust mad rhymes like these couplets:

We are overwhelmed by the Fake News

Luckily we have Trump's Twitter to see the truth

You don't learn that kind of poetry in no university, dawg. Also, look at him symbolically burning a copy of the failing New York Times while rapping "CNN is ISIS, and so is NBC / They all are the Enemy." He had to buy the paper to burn it, so they're probably all kinds of upset.

The video got a warm mention from Pizzagate idiot Jack Posobiec and also from the influential Total Frat Forum, so you know it's good. Also, it has jump cuts and ends with Mintyboy "rolling coal" in the great big truck, which the video's description mentions he borrowed from a friend.

Not everyone was a fan, though:

Also, somebody noticed a disturbing resemblance between Mitt Chimp and Dale Gribble:

It is now your OPEN THREAD.

Yr Wonkette is supported by reader donations. Keep clicking the "Donate" linky and we'll keep from singing, ever.