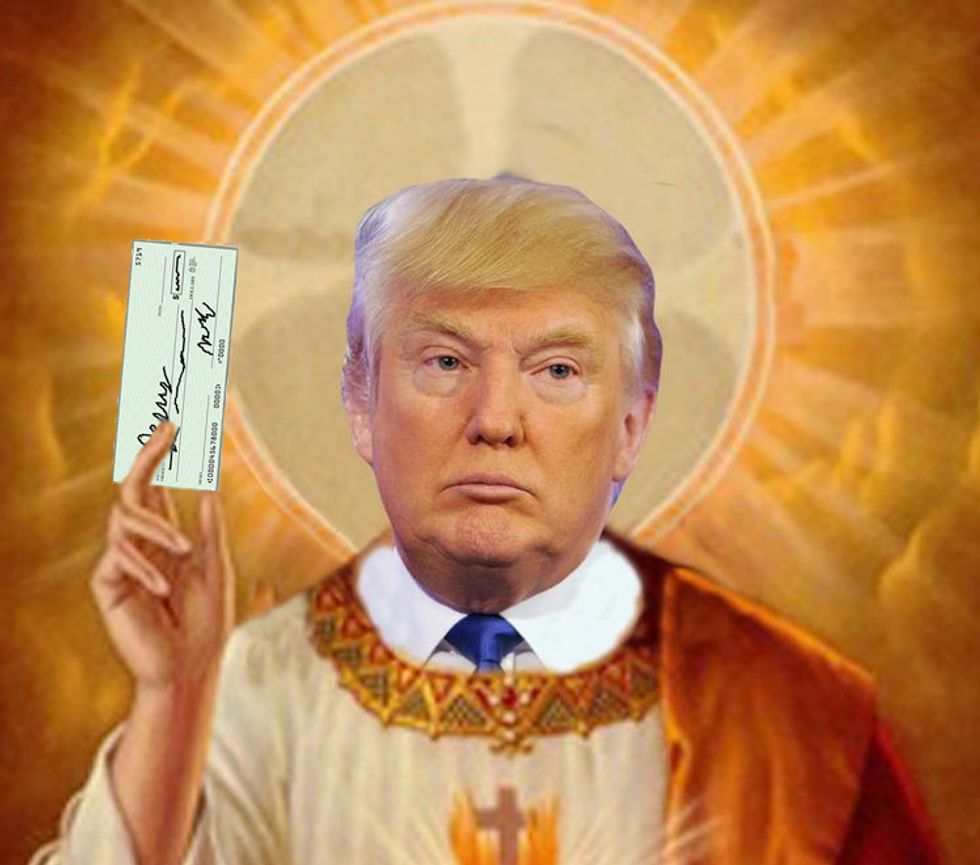 Perhaps this will help you recognize my love of God

Oh, lookie here, seems like Donald J. Trump, that great humanitarian, used funds from the Donald J. Trump Foundation to help grease some palms that would later be clasped together in prayer for his run for president. Real Clear Politics looks at some donations Trump made from his foundation to charities that just happened to be run by conservatives who were initially skeptical about his devotion to God, the Bible, and Saint Reagan, like Oran Smith, a "family values" activist in South Carolina who didn't think Trump would be a very appealing choice for conservatives in his state:

"Trump would get thumped here,” Smith, president of the Palmetto Family Council, a social conservative public policy group, told the Christian Broadcasting Network. “He is a celebrity, but an apprentice at politics.”

Smith’s comments appeared in a March 2011 CBN story alongside feedback from other key national evangelical leaders such as Ralph Reed and Tony Perkins. Shortly after the story ran, Trump called Smith and invited him to meet at Trump Tower in New York, Smith told RealClearPolitics, “to see if he could convince me those things weren’t true.”

“It probably had something to do with, I was in an early primary state,” Smith said. Trump was “laying the foundation for a ... campaign,” Smith thought at the time, although “it was difficult trying to tell if he was serious about running for president or not.”

Trump and Smith had a good old talk about Jesus and religious freedom, and maybe what happens when Two Corinthians go into a bar. Smith was impressed, because this seemed like "a different Donald Trump than I expected." Oh, and as he was on his way out, Smith asked if Trump would consider making a contribution to the Palmetto Family Council. Wouldn't you know it, Trump and God both work on the "Ask and ye shall receive" principle, although Trump's gift was more on the financial than the spiritual side:

“It was a quiet donation that came with a simple cover letter,” Smith said. It read: “Great meeting with you and your wife in my office,” dated May 6, 2011. Enclosed was a check for $10,000 from the Donald J. Trump Foundation.

Also, too, Smith was careful to tell Real Clear Politics, “He was never heavy-handed about any quid pro quo[.]” The story doesn't note whether this statement was accompanied by a knowing wink.

Turns out that Smith's group wasn't the only beneficiary of the Trump Foundation's generosity!

From 2011 through 2014, Trump harnessed his eponymous foundation to send at least $286,000 to influential conservative or policy groups, a RealClearPolitics review of the foundation’s tax filings found. In many cases, this flow of money corresponded to prime speaking slots or endorsements that aided Trump as he sought to recast himself as a plausible Republican candidate for president.

Although sources familiar with the thinking behind the donations cautioned that Trump did not explicitly ask for favors in return for the money, they said the contributions were part of a deliberate effort by Trump to ingratiate himself with influential conservatives and brighten his political prospects.

Imagine that! Trump did a lot of spending to help win friends and influence conservative groups, and by sheer coincidence, when the money was going to specific political campaigns or local Republican party groups, the cash came directly from Trump's personal funds.

But others, in particular those directed to the nonprofit arms of conservative policy groups, originated with Trump’s foundation.

Trump Foundation's Gift To Florida A.G. Pam Bondi Was A Little Illegal. Is That A Crime?

Nothing to see here. Everything's on the up and up, all right.

Hey, it was for charity, and the Trump Foundation is a charity, so that was all perfectly OK, right? It's not like that time he accidentally threw Trump Foundation money at Florida attorney general Pam Bondi's campaign, right?

The donations to groups that granted Trump plum speaking slots or otherwise promoted his political aspirations also might run afoul of self-dealing rules for private foundations, which prohibit a foundation’s leadership from using donor money for its own gain.

“Getting the right to speak or access to networking events, that’s definitely starting to push into self-dealing, where you’re using the private foundation assets to benefit Mr. Trump,” said Rosemary Fei, a partner at the Adler & Colvin law firm in San Francisco, where she specializes in charity law.

Multiple Trump campaign aides did not respond to requests for comment.

Gosh, sure didn't see that one coming. Guess Kellyanne Conway's going to have to explain that it's a complete coincidence Trump Foundation money happened to find its way into the coffers of nonprofits which by pure coincidence helped his campaign. They're still nonprofits doing good charitable work, after all, and as she said about David Fahrenthold's well-documented work on other instances of what appears to be self-dealing, the Real Clear Politics piece also relies on the conditional -- the contributions "may have" broken the law, which means there's no proof at all and everything's just peachy. Also something something Clinton Foundation uranium.

In addition to the hinky-looking donations to those conservative and evangelical 501(c)(3) groups, Real Clear Politics managed to find what appears to be another donation from the Trump Foundation to an expressly political group, not its related "charitable" arm:

RCP’s review of IRS filings by the Trump foundation turned up a fresh conflict: a 2013 donation of $10,000 to The Family Leader, a 501(c)(4) established to “develop, advocate and support legislative agenda at the state level.” Unlike a 501(c)(3), or a nonprofit organization, a 501(c)(4) can effect policy and engage in limited political activity, and thus is subject to greater restrictions on contributions from charities.

If the Trump foundation sent its money to The Family Leader and not its affiliated nonprofit, it did not properly note it in the filing and might have failed to earmark the money for charitable purposes, a violation of IRS rules. If the money was sent to the Family Leader Foundation, it was not recorded as such.

“There’s a mistake somewhere,” said Fei. “It might be a really substantive mistake, or it could just be a reporting error or sloppiness. But improper reporting is still a violation of tax law. That’s something the IRS would look at."

You don't say! By complete coincidence, the same year it received that $10K donation from the Trump Foundation, The Family Leader

featured Trump as a marquee speaker for the first time at its influential leadership summit in Iowa. The announcement raised eyebrows: Craig Robinson, editor of the Iowa Republican blog, wrote that Trump was “an odd fit for a social conservative confab,” while the Family Leader was roundly criticized by other Iowa conservatives for including Trump in the program.

Who's Who Of Wingnuttia Gathers For Family Leadership Summit In Iowa To Praise Jesus, Hate Obama

Hey, Yr Wonkette remembers that little ol' confab, too, and we noted he seemed an odd choice, also as well:

Donald Trump is the featured speaker this year, which definitely makes sense because who represents good old-fashioned family values better than the thrice-married dude whose current wife slathers their kid in caviar moisturizer? (Okay, admittedly, the caviar thing does not necessarily mean the Trumps aren’t super swell parents, but come on, that is weird and disgusting and should be repeated often.)

We had no idea he'd paid for that microphone, though. At least it worked OK!

Oh, and there are plenty of other examples, like that time in 2013 when Trump got a plum speaking slot at CPAC so he could advocate re-invading Iraq to "take the oil." As it turns out, he helped grease his way to that podium, too:

That same year, Trump used his foundation to donate $50,000 to the American Conservative Union Foundation, the nonprofit arm of the group that organizes CPAC and sets its program. He did not ask for a speaking slot in return, but he did not need to.

“Everyone’s too smart to say, ‘Donate and we’ll let you speak,’” said one source familiar with the donation. “It was kind of understood.”

And so on, donation after donation to "charitable" 501(c)(3) groups that just happened to be very useful to Donald Trump's political ambitions, including of course Citizens United, the group that helped us get rid of distinctions between political and charitable groups altogether. Gosh, what a generous guy, so dedicated to using other people's money (remember, Trump stopped donating to the Trump Foundation in 2008) for the public good, and for making America Great again. Go read the whole thing -- and let's hope this reporting gets the attention it deserves, because like David Fahrenthold's work, this really exposes what a slimy operator Donald Trump is.

Quick, maybe it's time for Drudge to run a big follow-up story on Bill Clinton's secret black child. Or Trump can find another woman he can call fat.