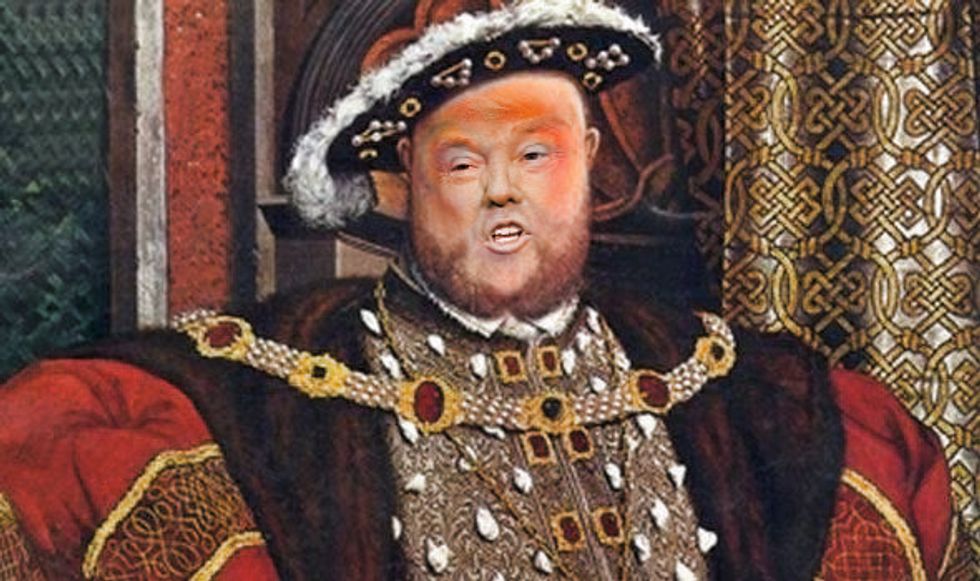 According to several sources, Newt Gingrich has been hoping to be Donald Trump's VP pick, and has been spotted passing him notes that say "Do you want to go to the White House with me, check yes or no!" under the table at several fundraising events, and also on Fox News, and also anywhere anyone is willing to listen to Newt Gingrich, wherever that is.

This weekend, Trump revealed that Gingrich is in fact on his short list for VP, and that is a thing that some GOP insiders are VERY excited about. Tingly, even!

According to an article published Monday in the National Review, the two are beautiful "kindred spirits" due to both their ability to harness white male anger and their many divorces. Which, in case you were unsure, is totally a plus, because it shows they "understand women." Unlike Hillary Clinton, who knows absolutely nothing about how much women enjoy it when their husband presents them with divorce papers when they are in the hospital recovering from uterine cancer so he can go marry another lady.

“I think Newt is lobbying to be the vice president, and I think their people are paying a lot of attention to him,” says Ed Rollins, a Republican operative and former Gingrich staffer now working for a super PAC supporting Trump’s candidacy. “It’d be a ticket with six former wives, kind of like a Henry VIII thing,” Rollins says. “They certainly understand women.”

Alex Jones: Michelle Obama Murdered Joan Rivers So She Wouldn't Tell Anyone About Her Dick

Alex Jones is a reasonable person who believes Donald Trump would make a good president, and Michelle Obama murdered Joan Rivers to keep her penis a secret.

Yes, if there is one thing Henry VIII is known for, it is his understanding of women. Also that sometimes he killed them for not being able to produce a male heir, and that he was really big on charging people with treason and heresy for saying "not very nice" things about him, then executing them without a trial, and that he broke from the Vatican so he could have a divorce, and then had the woman he divorced killed anyway. Because he was a LEADER who understood the Divine Right of Kings, just like Donald Trump does. Henry obviously understood women, or else six of them probably would not have married him! Barack Obama, by contrast, hardly understands women at all, since he only married one of them (if that many).

You know who also understood women really well? Former Young Republican leader Ted Bundy, who understood them well enough to get at least 30 of them to help him out with his groceries so that he could murder them.

The "We've Had A Bunch Of Divorces"/Henry VIII ticket is a really great angle, and Republicans should for sure go for that, especially if they want to appeal to family values voters. They will for sure be impressed by the fact that both of these fellas love heterosexual marriage enough to do it three times each!

Sure, a lot of people think Henry VIII was kind of a bad dude, but that is because they have been indoctrinated by liberal teachers who want you to think that executing your ex-wife is bad or something, probably in order to push their evil feminist agenda. But keep in mind that these are the same sort of liberal teachers who feed lies into impressionable children's heads about the Spanish Inquisition and the Crusades not being awesome things, and try to tell them Christopher Columbus didn't actually discover America and God didn't invent the earth in six days a few thousand years ago.

One thing we can all be sure of is that if we end up with President Trump and Vice-President Gingrich, the reign of Henry VIII will start looking really good.