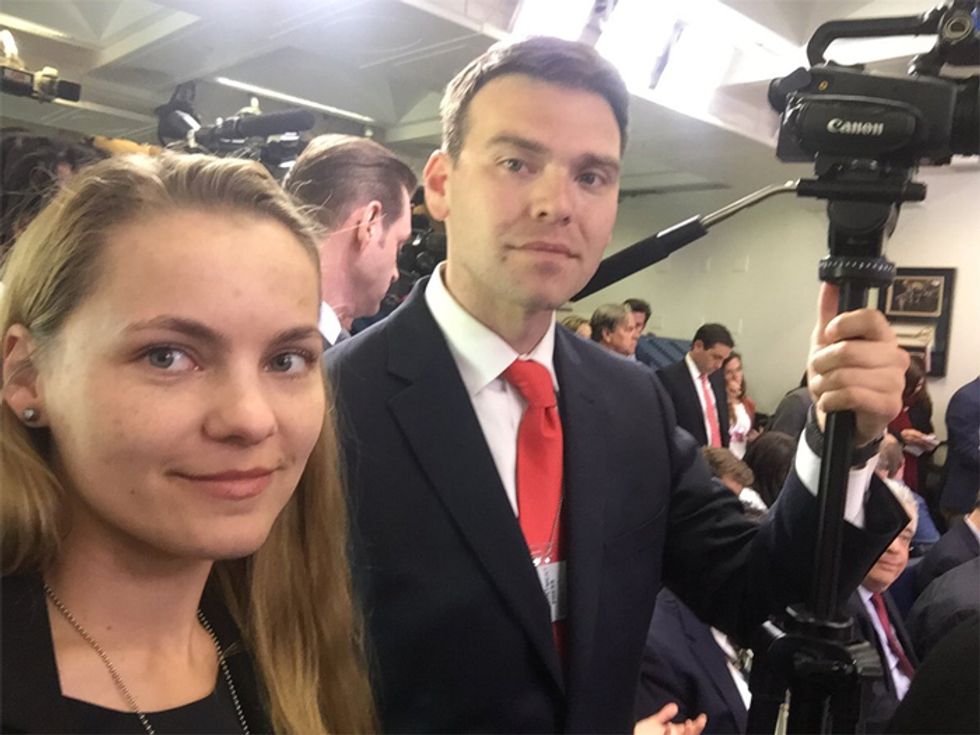 Yes, he's in the White House briefing room. Why wouldn't he be?

Have you met Jack Posobiec? You should meet him! He has suddenly become sort of Internet Famous as the rightwing troll / "journalist" who started the #MacronLeaks hashtag on Twitter and helped call attention to the supposedly scandalous stuff in the trove of documents hacked from the newly elected French president's campaign just as campaigning ended. He's an alt-right racist-frog man with a Russian bride, and you should read this brief New Yorker profile, or maybe this fun exchange with Reuters, in which Posobiec insists any rumors he might have connections to Russian trolls is racist, because his family is Polish and some members of his family "died under Stalin," which is as true as anything else you see on the internet.

So of course it shouldn't surprise anyone to find Posobiec bringing his journalistic insights to Alex Jones's Infowars, explaining all the True Facts uncovered about the new French president and his wife Brigitte:

Jesus christ, the #MacronLeaks guy is on Infowars saying Macron's wife may have seduced him so that govt could "mind control" him with drugs pic.twitter.com/LE6XycSTDU

There's a whole lot of stupid in just a minute and a half -- during which they neglect to mention the Macron campaign's statement that the online documents included many forgeries. C'mon guys, you could at least mention it so you could then dismiss it as a cover story. Among other things, we learn not only the known known, that Brigitte was Macron's high school teacher, but that she started seeing him when he was 14 or 15 (but no sex until he was an adult), so obviously he was being groomed for some nefarious purposes by her, (or her controllers): "That right there tells me something very, very fishy was going on," Posobiec explains, without quite saying what. But it all fits together with THEIR agenda:

It may be they found this guy very, very young, and they were using that to, essentially, turn him into a puppet, turn him into a marionette, and now they're plying him with drugs, keeping him drugged up, getting him to do whatever they want [...]

[It's] the same type of mind control they use for celebrities, for actors, for musicians that we see around the world.

You know, the way all the celebrities and actors and musicians are mind-controlled. That stuff. Say, what about our reality TV stars?

The alleged mind-control drug purchase news comes from that most reputable of sources, Award Winning Journalist Chuck C Johnson's GotNews, so you know it's reliable. Funny, that piece doesn't mention the campaign's warning about fraudulent documents either.

Posobiec has somehow ("somehow") managed to get a White House Press pass, even, so you know he's a real serious journalist:

DeploraBall Guests Told Not To Heil Hitler, And No Dirty Dancing Either

Also Jim Hoft, Stupidest Man On The Internet, will now be an official White House Correspondent.

Heh, we are so old, we remember thinking the presence of Jeff Gannon in the White House press room was shocking -- and now that we think about it, it still is. But now the Trump administration has done whatever the inverse of throwing open the gates of the asylum is, and all the barking crazies' Tweets are coming from inside the White House, with such illustrious press pass guests as Mr. Pizzagate and the Stupidest Man On the Internet.

Frankly, we're increasingly happy Alex Jones (White House Press Pass any day now) listed Yr Wonkette among the Fake News places. We wouldn't want to sully our reputation by being in the same room with some of those loons. We're holding out for National Security Adviser, anyway.

Yr Wonkette depends on the kindness of readers to keep us online. We know you'd just love to click that "Donate" linky there. Don't make us mind-control you, OK?