Trump Hands Kirsten Gillibrand Knife, Begs Her To Chop Off His Peener 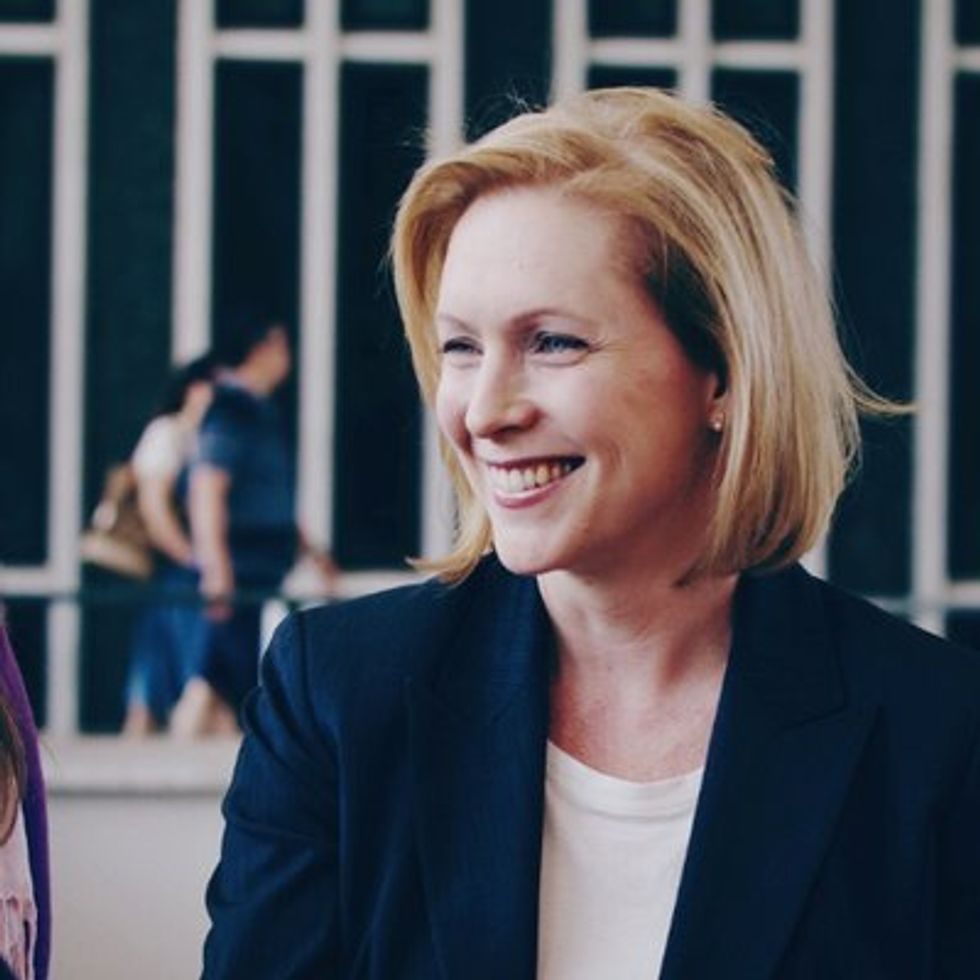 Know how we said Sarah Huckabee Sanders had a weird press briefing on Monday? She's gonna have another weird briefing today, assuming she does one. Because this happened:

Oh, Donald! You glorious fucking idiot! On the day when Alabama's making its final decision on whether to vote for a sexual predator, a decision that will hinge on turn-out from African-Americans and pissed off women, you LITERALLY TWEETED that the wonderful, highly respected female senator from New York BEGS you for campaign contributions (and would do anything for them, by which you, the president, mean she is willing to fuck or blow you for them). You did this in the middle of the #MeToo awakening, when women are not fucking taking it anymore.

And, you fucking moron, you also took Kirsten Gillibrand's bait. We will 'splain in one sec, but first, Gillibrand has responded on Twitter:

Maggie Haberman gives a little context on what part of Gillibrand's day Donald Trump was interrupting, so she could type that reply on Twitter:

And in case you are NEW AT LIFE and wondering whether Donald Trump was even telling the truth:

When we said Trump had taken Gillibrand's bait (LIKE A IDIOT), we were referring to how on Monday, she loudly called on him to resign right the fuck now, because of the multitudes of women credibly accusing him of sexual harassment and abuse. And boy oh boy, the thin-skinned rectal stain in the Oval Office -- or to be clear, lounging around in his underpanties in the White House residence, because lazy ass doesn't go to work that early in the morning -- couldn't stand it. So he, predictably, picked up his Obamaphone and set his meat fingers to Twitter-raging.

To be clear, this may be the dumbest and most ill-advised fight the man has ever started, and that's saying something.

In part, this is a typically stupid lie from Trump. He always likes to claim people are in his office BEGGING him for endorsements or contributions. And it's typical that Trump, in the face of a strong woman demanding his orange shithole face resign from office, would fall back on being a sexist pig, because he doesn't have the mental capacity to say anything better.

But it's funny because, if you are not familiar with Senator Gillibrand, this is her fucking issue. Gillibrand has been fighting the fight on sexual harassment and abuse, particularly in the military, for years, and sometimes she's been a lone voice in the darkness. But now here we are, and literally the entire universe is waking up to the problem, men are losing their careers over it, and the burnt-steak-eating, pussy-grabbing, Twitter-shitting elephant in the room is that the president, Donald Trump, is an admitted sexual predator.

What's that old expression about bringing a knife to a gun-fight? We should make up a new version about how you shouldn't bring your tiny pathetic orange puss-grabbing hands to a Kirsten Gillibrand fight.

So "Morning Joe" was awesome after Trump tweeted that. Want to watch Mika Brzezinski literally yell at the TV camera, reserving much of her ire for Sarah Huckabee "Poot Lips" Sanders, the press secretary who, just yesterday, essentially said Bitches Be Lyin' about her beloved boss, Donald Trump? Yeah, let's watch that:

I just want to say something beyond the fact that is reprehensible that the president of the United States would say something so derogatory and disgusting about a woman. We’re not surprised, Mr. President, you do it all the time. You treat women terribly and you treat the women around you even worse. You treat women like punching bags because it’s fun for you, because you are intimidated by women. That’s your problem, OK, but for the people who work for you, you need to act. Sarah Huckabee Sanders, good luck today in the briefing! DON'T LIE. And do not defend the president of the United States for what he did. If you do ... you should resign.

And in case Press Secretary Poot Lips didn't hear her, Brzezinski doubled down on Twitter:

Oh Donald Trump. You done stepped the fuck in it this time.