Trump Hires John Bolton As New National Security Adviser, We Are All Going To Die 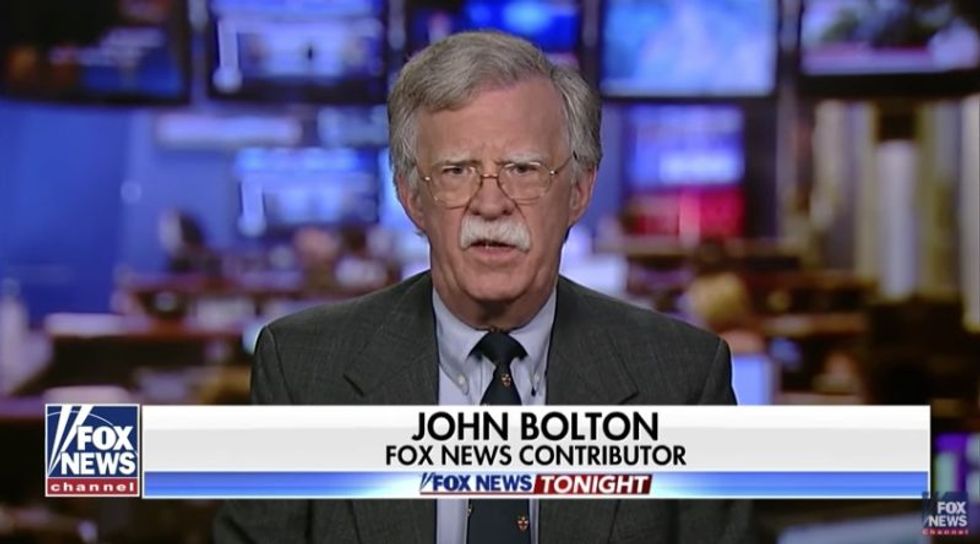 There's all the résumé he needed for Trump.

In a Politico story about how Donald Trump's decision to replace national security adviser H.R. McMaster with ambulatory nuclear warhead John Bolton has screwed up plans for a wider cabinet shake-up, we get this insight into at least part of why McMaster just wasn't working out for Trump:

McMaster [...] is an intensely focused intellectual whose detailed briefings, by all accounts, drove the president crazy. Trump took to mocking him openly in the Oval Office, asking other White House aides why McMaster was so serious.

No doubt about it: John Bolton will definitely do a far better job of amusing the toddler president, because after all, Bolton was on Fox News, and he really loves him some war stuff. And by golly, Donald Trump loves anything that sounds tough, too, so it's a perfect match, as long as you don't mind getting into a few wars now and then.

Remember how Donald Trump the candidate swore up and down he'd been against the Iraq war from the beginning (oh, sure, there were the quotes of him saying he supported it, but that didn't matter). That was for some reason a huge talking point that proved Trump was a far more dovish candidate than Hillary Clinton, who simply loved war all the time. Haha, now Trump has picked as his national security adviser one of the founding neoconservatives, a member of the Bush team who not only insisted that Saddam Hussein had huge stockpiles of WMDs, but was also a key player in slanting intelligence to support going to war. Hell, John Bolton may be the last person who still truly believes the "Axis of Evil" speech was true: he insists, with no evidence of course, that Iran has helped North Korea with its nuclear and missile programs. Boy oh boy, will Trump ever be surprised when he finds out he's picked somebody who still thinks the Iraq war was simply a great idea.

It's worth noting, too, that Trump is at least smart enough to recognize that Bolton could only be hired for a job that didn't require Senate confirmation. Back in 2006, Bolton's nomination to be US Ambassador to the UN was blocked by the Senate -- and mostly by Republicans, at that (explain to your kids that a decade ago, there were still some Republicans who knew a crazy man when they saw one). Bush went ahead and appointed Bolton during a recess anyway, although Bolton famously said way back in 1994 that

There is no United Nations. There is an international community that occasionally can be led by the only real power left in the world, and that's the United States, when it suits our interests and when we can get others to go along.

Since Donald Trump seems to have stopped remembering anything after the 1990s, it's possible he might know about that speech and think Now there's an America First guy.

Just as Trump prizes toughness -- or at least talking tough -- above all, John Bolton sees military action as the best possible tool for remaking the world in the shape he'd like: with lots of bomb craters everywhere. Crazy peacenik military guys like McMaster may talk about military force as the last resort for foreign policy, but Bolton, like Trump, is unburdened by any actual military service, so he doesn't have to think about the mere gritty realities of moving armies around or what happens after you bomb the hell out of foreigners. His strategic thinking, such as it is, doesn't account for any actual humans being left around after you've announced "Mission Accomplished." Which is why it's so easy for him to pretend that foreign policy is just a matter of using lots of force here and there to get what America wants, and casualty counts barely enter into it. It's all maps and big red arrows to him.

Consider his unhinged Wall Street Journal op-ed from last August, in which he outlines three options for -- say, why not -- a first strike against North Korea, to eliminate its nuclear program, easy-peasy: hit all their nuclear facilities and destroy them, boom!; shoot down one of their missiles just as it's launching, to show we can do it; or how about decapitating North Korea's leadership with airstrikes and then literally invade the country, which would be easy, you see -- we'd just "sweep in on the ground from South Korea to seize Pyongyang, nuclear assets, key military sites and other territory." The North Korean military would probably be too busy throwing roses at our feet to fight back. But since the country has put all its assets into building up its military, we'd have to bring along a supply of roses.

Say, what about all the conventional missiles and artillery the North has, aimed at Seoul and ready to wipe out hundreds of thousands of people in the South within minutes? Bolton, ever the strategic thinker, isn't saying they wouldn't get their hair mussed:

All these scenarios pose dangers for South Korea, especially civilians in Seoul, which is within the range of North Korean artillery near the Demilitarized Zone. Any military attack must therefore neutralize as much of the North’s retaliatory capability as possible together with the larger strike.

You can almost see him watching Dr. Strangelove and not realizing the folder labeled "World Targets in Megadeaths" is a grim joke. Oh, yes, and speaking of world targets, should we give any thought to the millions of people who might be killed if we re-started the Korean War? Probably not, since of course we'd win very quickly. But what if we didn't win very quickly? Shut up, and also, acceptable losses:

The U.S. should obviously seek South Korea’s agreement (and Japan’s) before using force, but no foreign government, even a close ally, can veto an action to protect Americans from Kim Jong Un’s nuclear weapons.

And if those close allies lose millions in the aftermath, those are just numbers to John Bolton, the Big Strategic Thinker. Not incidentally, he also thinks China's reaction would be to thank us for reunifying the Koreas, under a government friendly to us, of course. Easy! (For more on Bolton's insane thinking on North Korea and China, see this excellent Twitter thread by defense expert Adam Mount of the Federation of American Scientists.)

Then there's Iran. God, does Bolton ever get a stiffy at the thought of bombing the hell out of Iran. He wanted to bomb Iran during the Iraq war. He figured the first Egyptian uprising would also be a good time to bomb Iran, too. Just two months ago he did another WSJ op-ed about how easy it would be to force regime change in Iran -- just bomb Iran, then go in and install a government that's more to our liking. Again, it would just be so easy:

America’s declared policy should be ending Iran’s 1979 Islamic Revolution before its 40th anniversary. Arab states would remain silent, but they would welcome this approach and might even help finance it. Israel can also remain silent but pressure Iran’s forces, as well as its clients, in Lebanon and Syria, to maximize the stress on Iran’s security assets.

Recognizing a new Iranian regime in 2019 would reverse the shame of once seeing our diplomats held hostage for 444 days. The former hostages can cut the ribbon to open the new U.S. Embassy in Tehran.

What could possibly go wrong? All we need to do is remember to grow enough roses in advance.