Trump ICE Thug Wants To Deport Jerry Brown -- Get This, For *Human Trafficking* 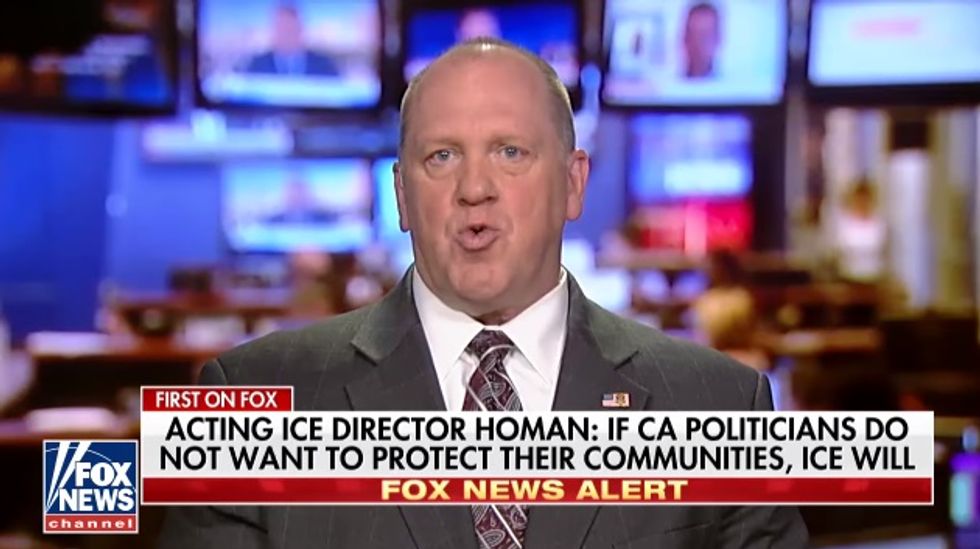 Thomas Homan, the acting director of Immigration and Customs Enforcement, thinks state and local political leaders who aren't on board with the Trump administration's War On Illegal Immigrants need to go to jail for their crimes. In an interview Tuesday with Fox News's Neil Cavuto, Homan, whom Trump wants to get the ICE job for good, insisted that municipal and state officials who pass any sort of "Sanctuary City" laws should be brought up on federal charges because refusing to go along with ICE's deport-'em-all agenda means they "knowingly shield and harbor" illegal aliens.

That perfectly Gestapo-like opinion came shortly after Cavuto asked how ICE would go about deporting every undocumented immigrant "without looking like the Gestapo." Homan resented the comparison, but ICE is already separating babies from their families and locking up little girls who've had emergency surgery, so we think that Schnellboot has sailed.

That is a violation of 8 USC 1324. That’s an alien-smuggling statute. I’ve asked the Department of Justice to look at this. Can we hold them accountable? Are they violating federal law?

Well of course they are, since passing a state law prohibiting cops from asking crime witnesses about their immigration status, or protecting social workers from having to rat out undocumented parents, is exactly like smuggling people across the border. When Cavuto asked what Homan would like to see done if DOJ does decide "sanctuary" statutes constitute human trafficking, he said he was all in favor of getting tough on such criminally uncooperative elected officials:

Several city officials in Texas were less than impressed, according to Texas Monthly. Austin Mayor Steve Adler seems to think there's something vaguely un-American about threatening to sic the law on local politicians who don't bow to Big Brother:

“Threatening to jail political opponents, especially for laws they aren’t breaking, is not the America I grew up in,” he said. “Austin is the safest big city in Texas, and we follow the law. I will oppose anti-immigrant policies, regardless of the personal consequences, because spreading fear and making threats makes us all less safe.”

Mayor Ron Nirenberg of San Antonio emphasized one of the main reasons that many in law enforcement don't want local police tasked with enforcing immigration law, which is a federal matter: Sowing fear among immigrant communities actually makes people less likely to report crimes and appear as witnesses.

No one is going to be arrested, especially here in Dallas. We’re not a sanctuary city. We cooperate with ICE. This is basically rattling a saber to make good sound bites.

And Sylvester Turner, mayor of Houston, said Homan was "going a bit far." Still, he wanted to know, "Did he mention me?" Sorry, buddy, it was California stealing Texas's thunder again. Maybe after Homan takes down that thug Jerry Brown -- ideally at a performance of The Diary of Anne Frank, for the poetry of the thing. But don't worry -- he'll get to Texas in time.

Yr Wonkette is supported by reader donations. Please click here to send us money. Drop some bucks on us, we won't drop a dime on you, capiche?