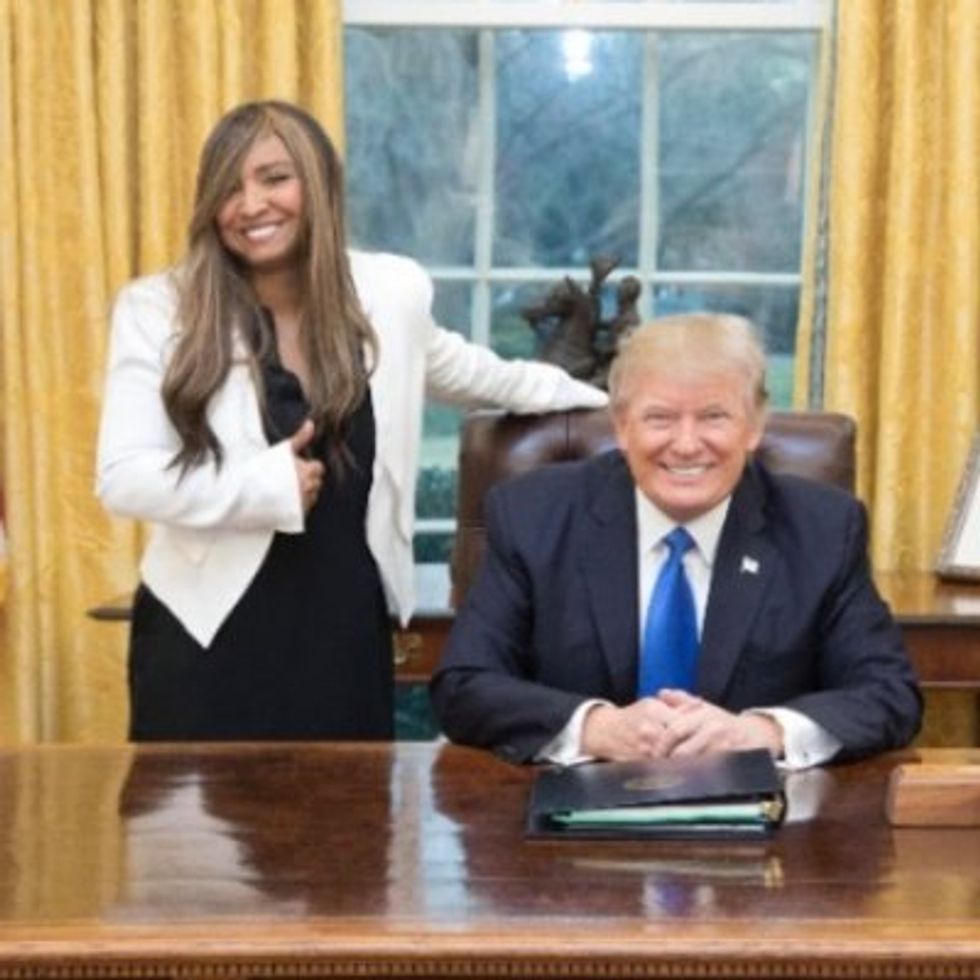 Now Trump will probably complain because she deleted the tweet.

Lynne Patton, the event planner who somehow was considered qualified to be put in charge of New York's federal housing programs because she had worked at Donald Trump's scammy "foundation," has managed to get her name in the news again. Let's all take a moment to be glad it's not because she somehow caused an entire housing block to burn to the ground -- she's only been in the job since June, so there's still time! No, Patton simply embarrassed herself and the administration by getting into a completely unnecessary Twitter fight with April Ryan, the White House correspondent for American Urban Radio Networks. As her twitfight with Ryan escalated, Patton posted a charming fat-shaming insult Wednesday evening, and although she soon deleted it, it was up long enough for the internet to remind Patton that screenshots are forever:

We'll grant Patton this much at least: she's fully assimilated the Trump rhetorical style. The chicken and egg puzzle remainsm though -- does Trump find like-minded assholes to work for him, or does he search out promising assholes and then shape them to reflect his worldview, and even his lexicon? As you'll recall, Trump himself called Miss Universe Alicia Machado "Miss Piggy" after she gained an unpardonable ten or fifteen pounds, the disgusting trollop.

To add to the ugliness, Patton initially started the Twitter feud after Ryan appeared on CNN's "Reliable Sources" last weekend and said she is among several journalists who have gotten death threats after Donald Trump's repeated attacks on the press. Patton just wanted Ryan to know she had no sympathy for some stupid journalist, as if a journalist getting death threats mattered. The REAL victims are black conservatives like Patton, who truly know what it is to suffer for their beliefs. Patton tweeted,

As a conservative black female who has publicly worked for & supported @realDonaldTrump, I’ve been getting death threats from fellow minorities on the left for the past 3 years — so welcome to the club. @AprilDRyan.

Ryan then made matters worse by not instantly recognizing Patton, who insisted Ryan must be obsessed with how she always Owns The Libs:

Obviously someone who occupies a lot of space in your head since you can’t stop tweeting about me...? pic.twitter.com/L8KhnKjVD4

You are not revelant and so desire to be. Snoop may not be pleased with your use of him. He thinks your kind is wack. This one is for you! https://t.co/DB5jBxTBgKhttps://t.co/vTAa8gkp25

And yes, more gifs followed. Needless to say, since Patton is a member of the Trump administration and was appointed by Ben Carson, she's contractually obliged to include erroneous information in all her public statements, including her insults:

This, coming from a blogger working for a bankrupt outlet. ? pic.twitter.com/Vdhuy4sVji

Hey, White House correspondent for a radio network, blogger, same same, right? And so on, up to the "Miss Piggy" thing Wednesday.

See? She knows how to be classy. Maybe she didn't know it well enough to not step over the line in the first place, but like a good Christian, she knows you can sin a whole lot as long as you ask for forgiveness. And classy ladies always include a photo of themselves at the 2016 Republican Convention in their apologies, so you can see they're both classy and important.

Ryan wasn't inclined to accept the apology, saying Trump World's habit of attacking the press "is serious. This is not a joke." Eventually, Ben Carson's stage manager and spirit animal (and also an alleged manrasser) Armstrong Williams stepped in to smooth the waters, although he isn't a government employee at all:

Hmm. OK, that's an apology at least, although should we be concerned that an actual cabinet member "wasn't able to reach" a member of the White House Press Corps? Was Carson's phone lost in a pyramid full of grain? In any case, Ryan accepted the apology -- and asked for an interview with Carson, because that's what journamalists do, you know.

Ms. Patton's Twitter feed appears to have gone silent since Wednesday night, as she no doubt searches for the perfect .gifs to fling at a journalist or demonstrate her abject fealty to the Great Man, as she did Monday, when Donald Trump personally ended the government shutdown.

Oh, right, there was a government shutdown last weekend. Remember that? What a huge victory for Donald Trump, yessiree.

Yr Wonkette is supported by reader donations. Please click here to send us money. Even if you're a LOSER. Are you a LOSER?!