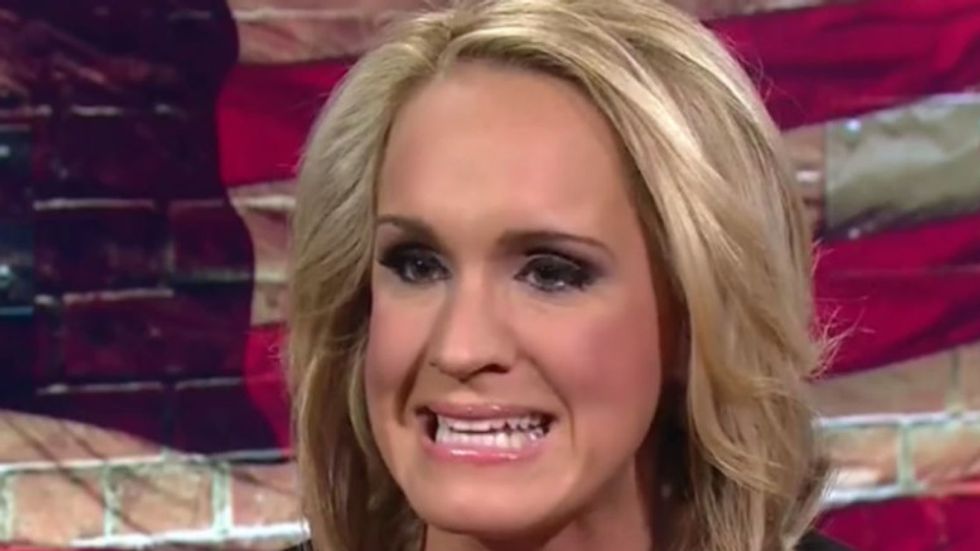 In what can only be the natural evolution of the "Well if you're so tolerant why don't you tolerate my intolerance, huh?" mindset, Trump campaign surrogate Scottie Nell Hughes got real mad on a CNN Sunday panel over Hillary Clinton being super mean to the racists who read Breitbart.

While MTV correspondent Jamil Smith said that the hiring of Breitbart's Steve Bannon was the most recent step in the Trump campaign's "rebranding of white supremacy," Hughes insisted that the site is not bigoted, but that Hillary Clinton is, for thinking it is.

“Bigotry, if you look at the definition, it’s about someone who’s small-minded and sits there and directs hate towards a certain group,” she explained. “Hillary Clinton’s speech [attacking alt-right conservatives] was all about hate towards a group that, while my fellow counterpart might consider them to be very racist, it’s the exact opposite.”

“These are God-fearing, baby-loving, gun-toting, military-supporting, school choice-advocating Americans!” Hughes added. “And just because maybe there might be some, a part of a very small fringe group [of white supremacists] that read Breitbart — by sitting there and saying the entire website is white supremacy is kind of ridiculous as saying just because you have people that are anarchists and communists that read the Huffington Post, calling that newspaper establishment, [is like] saying that they’re pro-anarchy and they’re against the United States government.”

Smith countered by saying it wasn't just Breitbart's audience that is super racist, but the content it publishes is super racist. Which is true! But also its audience is super racist. Have you ever read the comments on Breitbart? They're pretty damned unbelievable. Like, when Harper Lee died, the commenters over there spent the whole time whining about how To Kill A Mockingbird was "SJW propaganda" and bad because it made people think racism was real even though it wasn't.

They also somehow managed to bring anti-semitism into the mix!

If you look at Breitbart regularly, both the articles and the comments, what you will see there is a pattern of incredibly convoluted racism. They say racist shit, but simultaneously insist that racism does not exist and is merely a thing black people and SJWs made up in order to bum nice white people out. You will also see about ten-thousand variations, on any given day, of the white supremacist talking point "Anti-racist is a code word for anti-white."

To boot, the site has embraced the alt-right label, and given that alt-righters personally define themselves as "race realists" and "anti-egalitarian," it is hardly a giant leap to say that the site itself embraces racism.

There is almost no way you could read that shit -- both the articles and the comments -- and not feel sick to your stomach, if you are not a seriously messed up human being, and also a racist. I have literally never come away from a trip over to Breitbart without going "Holy shit, what is WRONG with these people?"

Also, if Hillary Clinton is a bigot for suggesting that Breitbart and its readers are white supremacists, isn't Scottie Nell Hughes being a bigot for saying they are all "God-fearing, baby-loving, gun-toting, military-supporting, school choice-advocating Americans"? Because that is also a generalization. And one which doesn't actually sound as positive as she thinks it does!

Even if Hughes feels that Breitbart is not a white supremacist, racist site in and of itself -- even if she thinks the site just happens to attract some of those people? If you've got a bunch of flies in your kitchen, you might want to check and see what it is you're leaving out there that's attracting them.