Trump Idiots Know What Is To Blame For Recent Celebrity Suicides -- Political Correctness! 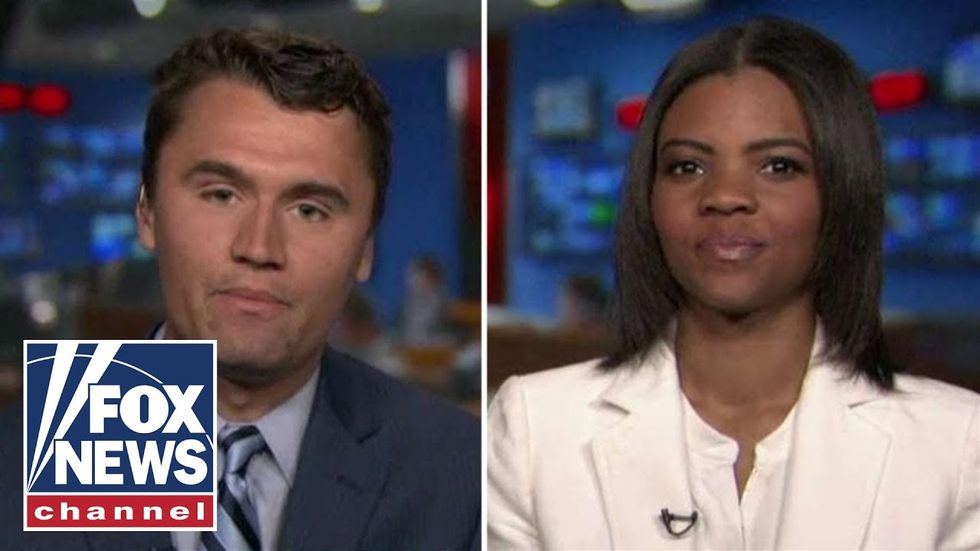 This week, we lost both Kate Spade and Anthony Bourdain to suicide. While most normal humans reacted by sharing nice memories of the two of them, or talking about depression and suicide prevention, with empathy and kindness... Trump idiots Charlie Kirk and Candace Owens of Turning Point USA decided to buck that trend and instead make these tragic deaths about their personal crusade against "political correctness" and "victim culture." Because of course.

In a Periscope video posted on Friday, Owens and Kirk drove around in a car (why do people do this?) chatting about how probably the reason for these suicides was that Bourdain and Spade were forced to be politically correct.

Let’s talk about Suicide and the Culture of Victimhood https://t.co/Ho88YHwtRc

The gist of this, it seems, is that she thinks everyone is actually as much of an asshole as she and Charlie Kirk are, that no one actually thinks anything they say or anyone else says is shitty, but that everyone is just pretending to, so that people will think they are perfect? That is quite the conspiracy!

Owens -- like a teenager who just finished reading "Catcher in the Rye" for the first time -- then explains that she, unlike all you other suckers, is a very authentic person, and that is why she said that not having babies made Chelsea Handler crazy.

Call me a phony, but I feel quite sure that at no point in recent human history has it ever been the case that saying every rude thing that comes into your mind comes with no social consequences. I also don't feel like it makes someone inauthentic to not do this. Sometimes, it's just not necessary! Most normal people do not feel oppressed by this. I am not mourning the fact that I can't just walk up to a stranger on the street and tell them that their outfit is hideous.

Kirk, naturally, agreed with her, explaining that people cannot even tell jokes anymore, because it might offend other people.

I feel like the reason Kirk feels like he cannot tell jokes has more to do with the fact that he is not funny than the fact that he is being oppressed by political correctness. I also do not think that either Kate Spade nor Anthony Bourdain committed suicide because they couldn't tell racist jokes.

The duo also blamed "victim culture," and their theory that people think they don't actually have to do or accomplish anything other than being victims. Pretty sure that's not a thing!

Kirk then reiterated Owens' point that everyone was actually just as much of a jerk as they are, but that they are forced to pretend otherwise, against their will.

“There’s this chasm between the public persona and the private person. And they feel as if they have to be someone different when they’re presented publicly. And that really creates demons inside of you.”

You know, if Sigmund Freud were alive today, and had not yet come up with the concepts of the id, ego and superego, I would bet you that he would be very impressed with Kirk's theories. Or not.

There are a lot of things that can be done to prevent suicide, or help people who are depressed. Not being able to tell bad racist jokes without someone thinking you are an asshole is not one of them.