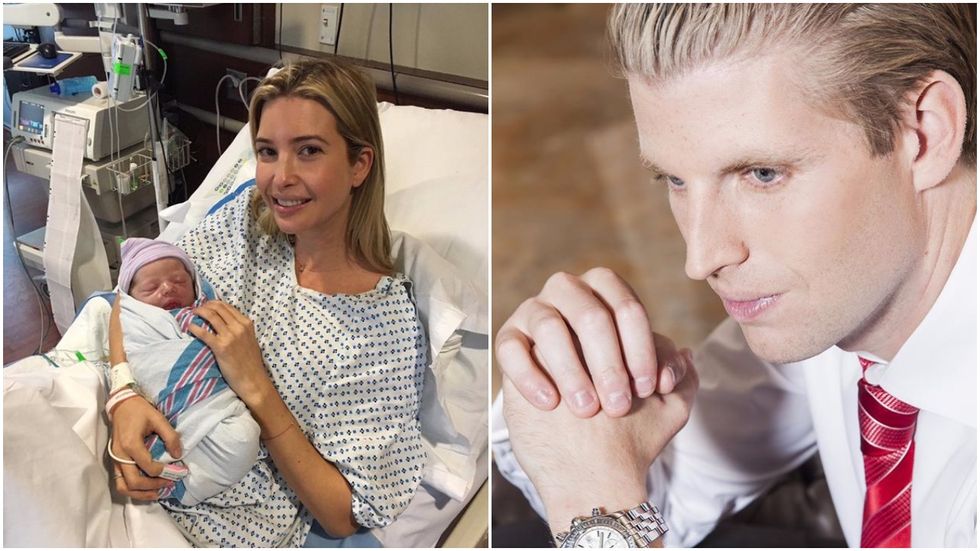 THEY WERE BUSY THAT DAY

Oh no, democracy is broked again. It's been revealed that two of Donald Trump's terrific kids weren't paying attention to their Snapchat alerts and forgot to register as Republicans in New York, which has closed primaries, which means they won't be able to vote for Daddy! So if Trump somehow manages to lose to Ted Cruz by two votes, guess who's not getting their yearly care package of a new Bentley, a bunch of bon-bons and an Entertainment® coupon book from daddy this year? Eric and Ivanka is who:

Trump conceded Monday that two of his children - Eric and Ivanka Trump - failed to register as Republicans in the state in time to be eligible to vote for him in New York's April 19 primary.

"They were unaware of the rules and they didn't register in time," Trump said on Fox News. "So they feel very, very guilty. They feel very guilty but it's fine." [...]

"Eric and Ivanka, I guess, won't be voting," Trump said.

Wait, they weren't Republicans before? YOU DON'T SAY. So yes, the thing here is that, according to the state of New York, new voters had all the way up to March 25 to register, but if you were suddenly, for some reason, deciding to magically change your party registration to Republican (like maybe because your dad told you to), you had to do that by OCTOBER 9. Wonkette's official policy on that October deadline is PFFFFFFT and go fuck a stump.

[wonkbar]<a href="http://wonkette.com/600092/sarah-palin-so-happy-donald-trumps-jewish-grandbaby-born-on-easter-just-like-jesus"></a>[/wonkbar]Because sometimes people are busy, you know, and things get pushed way down on the to-do list. Like for instance, did you hear about how Ivanka Trump just had a baby? Her THIRD BABY? And she's doing this while also working for the Trump organization, AND she just got some disturbing news about how the scarves in the Ivanka Trump Collection spontaneously catch on fire, etc. She has things to do, is the point.

[wonkbar]<a href="http://wonkette.com/599807/psa-please-do-not-poison-donald-trumps-creepy-looking-son-with-lemonade"></a>[/wonkbar]Oh, and Eric Trump is busy too. He also works for his dad's empire, and it takes many hours per day to maintain a face THAT punchable. Moreover, he is still recovering from the time somebody terrorismed him by sending him some powdered lemonade in the mail. Wonkette's official policy on doing terror to Eric Trump is still STOP IT.

Oh well. It'll probably be fine, as Dear Daddy is ahead in polls in New York. Maybe the children will get off their damn fannies and make sure their registration is current for November, so they can secretly vote for Hillary or whatever.