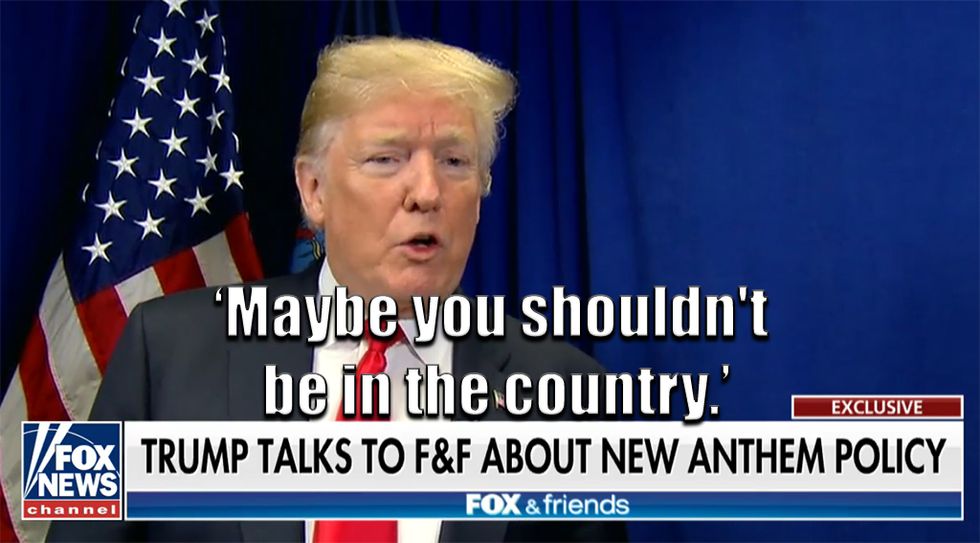 As Trump continues to engage in a scorched earth campaign over the ongoing Trump-Russia investigation, Robert Mueller's team is working with the courts to keep certain details from going public, and dumping more fuel onto the Trumpster fire.

Later today a bipartisan group of Congress members will be briefed on the FBI informant who talked with Trump's lackeys during the 2016 election. First Devin Nunes and Trey Gowdy will get their very own special briefing, then the Gang of Eight will get one. Whatever, Devin Nunes smells like cowshit and hookers anyway.

Rudy Giuliani is changing his story AH-FUCKING-GAIN, telling WaPo that Trump might sit down with Robert Mueller -- but only after they find a way to blame Trump-Russia on a black guy and KKKillary.

A federal judge called bullshit on Paul Manafort's argument that the FBI improperly seized records from his storage unit, asking one of Manafort's attorneys, "Where’s the evidence that makes [the search] unreasonable?" [Archive]

The BBC reports that Michael Cohen was paid between $400,00 and $600,000 to set up an Oval Office grip and grin between Trump and Ukrainian President Petro Poroshenko. According to the report, it was Poroshenko who leaked Paul Manafort's "black ledger" in an effort to get into Hillary Clinton's good graces, but Poroshenko became worried about being skullfucked by Putin (again) after Trump won. Fun Fact: Poroshenko's an oligarch known as "the Chocolate King."

Mike Pompeo begrudgingly admitted to the House Foreign Affairs Committee that Russia interfered with the US election in an effort to help Trump. Really twisting his arm, huh? [Archive]

The New York Times has an infographic on some of the ways the Trump-Russia investigation(s) could play out. There's still a lot of unknown-unknowns...

Jared Kushner now has a full security clearance, and his lawyer wants you to know that it means Jared Kushner isn't guilty of treason, even though his father-in-law could have just signed off on his clearance.

A federal judge has ruled that it's a violation of the First Amendment for Trump to block people from his personal Twitter account, but there's still no word on whether or not Twitter will actually begin enforcing it's anti-hate TOS.

The Senate cleared a multibillion-dollar overhaul of the VA, and increase the use of private care facilities.

Trump is floating an idea to withhold foreign aid from "shithole" countries that send us all their Mexican rapists, murderers, and "animals."

An internal White House memo from last September shows the Trump administration thought about ignoring climate science data from government agencies, "and not seek to characterize or question, the science being conducted by Federal agencies and outside entities.”

As SCOTUS weighs gerrymandering cases throughout the country, the ACLU has filed a suit alleging gerrymandering in Ohio's congressional map, saying Democrats were packed into four of the state's 12 districts.

Jeff Flake was the commencement speaker at Harvard and said mean things about Donald Trump ruining the American carnage the Republican party created.

George Conway's constant tweets are causing all sorts of headaches for Trump's White House, but his friends think he's just being a boy scout.

CNN had a town hall with Nancy Pelosi last night where she noted that the Republican briefing shouldn't happen. She was also grilled on school safety.

The Senate might actually pass a bill to reform sexual harassment policies so that members of Congress are responsible for their own settlement payments, but some legislators don't think it goes far enough towards putting the power in the hands of the victims.

Revolting House members are holding back their petition to force a vote on immigration reform, but they say they now have enough signatures to run around Paul Ryan.

Blue Dogs are ramping up their rhetoric and hoping to see their caucus swell in November.

Back in 2014 a winery co-owned by Devin Nunes had a coke party with hookers of a questionable age on a yacht and encouraged some of the women on staff to join. Nobody was in any danger, it was just the implication of danger.

A Tennessee parole board is conflicted about what to do with Cyntoia Brown, who was forced into prostitution at 16 after being raped and abused by her pimp, "Cut Throat." Brown was convicted of first-degree murder and aggravated robbery for killing a John at 16 after she freaked out when he went to grab something.

That gross 30-year-old neckbeard who won't move out of his parentss house had a disastrous and awkward interview on CNN. He did another one with Fox news a short time later that was equally terrible.

New data shows how only the most affluent zip codes have recovered from the Great Recession, and the poor have just stayed poor, or gotten poorer.

Axios went to Jerusalem to give Trump's ambassador to Israel a big, sloppy blow job, and put some high gloss on the administration's vaporware "peace plan."

Something bad happened between Jessica Walter and Jeffrey Tambor on the set of Arrested Development, and when the cast sat down with the NY Times to promote the show's new season, several of the male co-stars were curiously shitty to Walter, and seemed to rationalize Tambor's genuinely fucked up behavior.

Environmentalists are eagerly awaiting to hear if McDonalds may ban plastic straws. #MakeSippyCupsGreatAgain.

Parents of children murdered at Sandy Hook Elementary are suing Alex Jones for pushing a "monstrous, unspeakable lie" that the the attack was a false-flag.

Neo-Nazi Richard Spencer says the "alt-right" doesn't care about free speech, it's just a "radically pragmatic" thing to say in order to spew their bullshit. Bari Weiss will not get the memo.

The FBI has taken control of a massive Russian botnet linked to the 2016 DNC hacks. Because of the way the software was written, it's being recommended that you reset your router immediately to purge any remaining connections.

Elon Musk went on a Twitter tantrum about journalists who've been critical of his childish and erratic bullshit, then threatened to create a website that rates journalists and truthiness. OH, DO ME! DO ME!! I could really use the free exposure...

Your local and state legislators may be wining and dining Apple CEO Tim Cook as it looks to build another campus to steal tech and shill its overpriced crapware. [Archive]