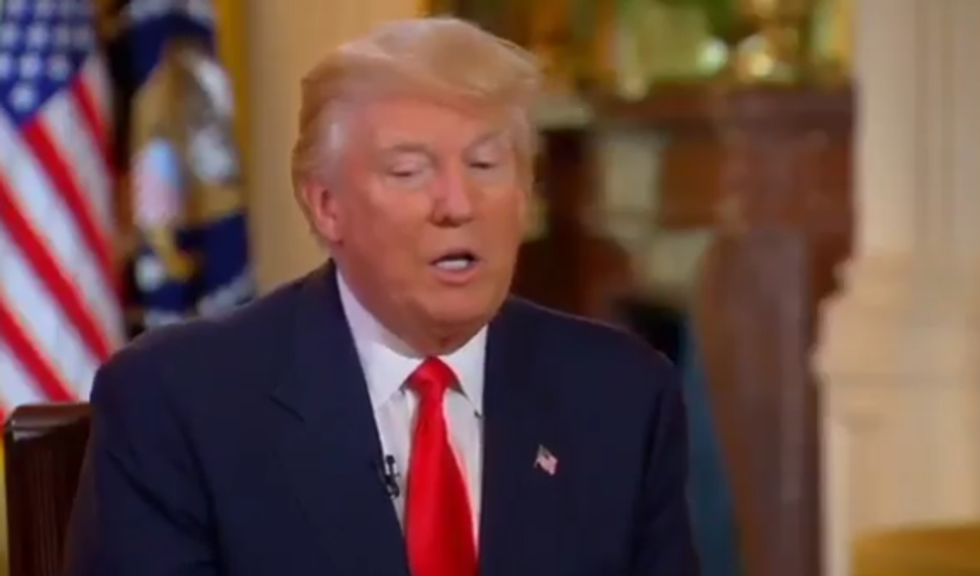 It's never his fault.

On the front end, we'd like to say two things. One is that we at Wonkette are not in support of screaming BENGHAZI!!!111!! every time an American troop dies, because for real, that is a risk every single one of them takes when they sign up, they know it, and it would be patronizing of us to act differently. We live in a world where war exists and America gets involved sometimes (a lot of the time) and there will be casualties, hopefully as few as humanly possible.

The second thing is that this answer from "President" Donald Trump, given on "Fox & Friends" in response to a question about how William Owens, father of William "Ryan" Owens, the Navy SEAL killed in that botched Yemen raid, doesn't even want to speak to the president right now, may be the most humble thing we've ever heard come out of his mouth.

That's not saying much, though, and also his answer is full of lies and "BLAME OBAMA!" and evidence that this "president" really doesn't get that his own actions have consequences. Let's go to the tape:

"I can understand... I'd feel 'what's worse?' There's nothing worse." -@POTUS on fallen Navy SEAL's father not wanting to talk to him pic.twitter.com/cPeJhB94ox

Well this is a mission that was started before I got here. This is something that was, uh, you know, just, they wanted to do. They came to see me, they explained what they wanted to do, the generals, who are very respected, my generals are the most respected that we've had in many decades, I believe. And they lost Ryan.

But again, this is something they were looking for a long time doing, and according to Gen. Mattis it was a very successful mission, they got tremendous amounts of information ...

Whew, OK! God, he babbles! And we hear Trump's words of "sympathy," such as they are. We really do! But it's a shame they're surrounded by so much bullshit! Let's try to briefly unpack this. Yes, the plan for the raid had been around since the Obama administration, but it had apparently not passed muster enough for Obama ever to have approved the mission, because the intelligence was not good enough. That had not changed by the time Trump approved the mission while he was eating his dinner and tweeting in the White House residence. In other words, DON'T TRY TO BLAME PRESIDENT OBAMA BECAUSE YOU AUTHORIZED A MISSION HE REFUSED TO SIGN OFF ON, ASSHOLE.

Also, Trump's very impressive generals are the same generals Obama had at his disposal, and yeah, they are very impressive! But saying "They lost Ryan" kind of passes the responsibility off on said generals, as if Trump isn't the one ultimately responsible, since he authorized the damn thing. To be clear, from everything that's been reported, the raid was botched because the president and his top advisers (the ones he was eating steak 'n' ketchup with, in Not The Situation Room) wanted to take some manly action as fast as possible, unlike that pussy Obama, who never ever had the balls to take action to conduct risky military raids involving Navy SEALS, certainly not with Hillary Clinton in the room. (Pssst! Rhymes with "Lin Baden." Of course, that raid went well, so we have no idea why we just brought it up. Anyway, guess Bamz 'n' Hillary dotted the "T"s and crossed their "I"s on that one, whereas Trump hasn't the attention span for such things.)

Also, to be clear, it looks like the raid really didn't produce any good intelligence, so oopsie, guess that part of Trump's answer was wrong too.

For the record, here's what Ryan Owens's dad, who is also a military veteran according to NPR, has to say about Trump's decision to authorize the raid that took his son:

"Why at this time did there have to be this stupid mission when it wasn't even barely a week into his administration? Why? For two years prior, there were no boots on the ground in Yemen — everything was missiles and drones — because there was not a target worth one American life. Now, all of a sudden we had to make this grand display?"

Saying that the U.S. owes his son an investigation, Owens criticized Trump for using a combat death to attack those who are calling for an inquiry.

"Don't hide behind my son's death to prevent an investigation," he said.

We're glad Trump says he feels for Ryan Owens's family and doesn't seem to take his dad's comments personally. We just hope maybe next time Trump decides to send American troops into harm's way, he mulls it over longer than it takes him to say, "grab 'em by the pussy!" And next time go to the Situation Room. And don't listen to President Bannon's or Jared Kushner's advice. And ... and ... and ...

Meh, we don't want to give Trump too many pieces of advice on How To President at once, he's not competent enough for that.

Did you know Wonkette is fully reader-supported? Be a reader and support us, with money!