Trump Lady Shocked -- Shocked! -- That Corey Lewandowski Smacked Her On The Butt 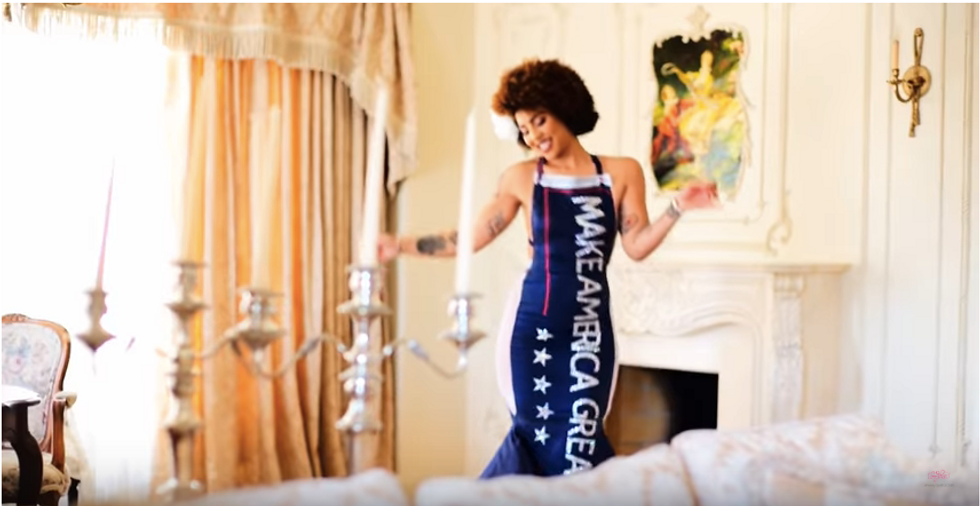 Joy Villa is a singer -- though you may not know her from ever having heard her sing, but rather for the ridiculous Trump-themed dress she wore to the Grammys and also in this very ridiculous music video that features a Gavin McInnes cameo towards the end.

Villa is now accusing former Trump campaign manager Corey Lewandowski of smacking her on the ass twice at a November party at the Trump International Hotel meant to celebrate Trump's first year in office. She says that when she was introduced to Lewandowski by a friend, he was immediately dismissive of her, assuming that she just wanted to get a picture with him.

“I said, if you’re busy, don’t worry about it, we don’t have to take a photo,” Villa recalled telling Lewandowski, who remains close with the president and attended a contentious Oval Office meeting on political strategy earlier this week. But Villa said another reveler pushed her toward him and she ended up standing next to him and posing for a picture, despite his seeming lack of interest.

“I’m wearing this silver suit and stretchy pants, and after the photo, he smacks my ass really hard,” Villa said. “It was completely demeaning and shocking.”

n the moment, Villa said, she confronted him. “I said, ‘Watch it.’ Half-joking, I said, ‘I can report you for sexual harassment.’”

Lewandowski’s response, she said, was almost as shocking as the original slap.

“He said, ‘Go ahead, I work in the private sector,’” Villa recalled. “Then he smacks my ass again.”

Corey Lewandowski is a total garbage monster who should have been forced to repeat kindergarten until he learned to keep his hands off of other people. This much is clear. Given his (alleged) tendency to drunk dial female reporters with sexually suggestive comments, as well as his (not-so-alleged) tendency to assault female reporters, he should probably never interact with a woman again, for any reason.

Since coming forward, Villa's Twitter feed has been filled to the brim with fellow Trumpists offering her support in this difficult time. And by support, we mean a lot of racial slurs, slut shaming, and accusations of being a SECRET LIBERAL.

Surprise! As it turns out, people who voted for the pussy-grabber-in-chief are not very likely to side with a woman of color against one of his golden boys. Then again, if it had happened to another woman, it's quite likely Joy Villa herself would react the exact same way. After all, she didn't see much of a problem with this kind of behavior when voting or wearing that dress to the Grammys.

Now, I am the last person on earth who is ever going to suggest that the victim of this kind of harassment is "asking for it." I'm not going to do that here, either. However, given Villa's support for Donald Trump -- a man who has openly bragged about groping women and grabbing them by the pussy -- I have to wonder what it is that she thought was at all wrong with Corey Lewandowski's behavior.

Is Joy Villa simply ok with other women getting groped without their consent? Is this some kind of double standard? This was not a thing, clearly, that she thought ought to disqualify Trump from being President. It didn't matter to her that her support for Trump was an implicit message to every other woman in America that his behavior with women was not only acceptable, but presidential. Perhaps Corey Lewandowski has presidential aspirations and is only following in the footsteps of the man Villa so admires.

Wonkette would never smack you on the ass, unless it were a consensual thing. Click here to leave us a tip!