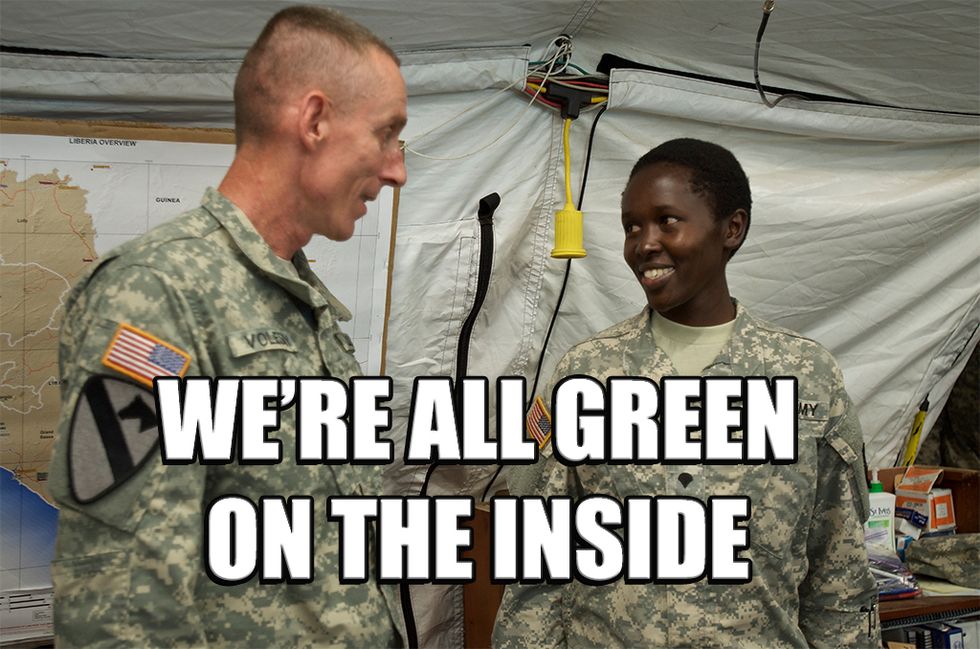 Nobody cares what kind of underwear you wear.

Hey there, Wonketariat! We've got a slew of newses for your today! Here's some of the things we may be talking about today.

The White House is expected to instruct the Pentagon to ban transgender troops in an effort to calm the fears of religious whackos terrified that openly trans troops will take over the government with pride parades, or something. [Archive]

A new email has surfaced of a Trump aide trying to set up meetings between Trump officials and Putin last summer, BEFORE Little Donnie's meeting with that Russian lawyer lady. WOAH, if true!

Ben Carson may have broken federal law by appearing at Trump's Rant-a-Palooza in Phoenix, since it was a campaign rally, and Cabinet members aren't supposed to be doing campaigns.

What kind of super powers do Robert Mueller and his Justice League of Extraordinary Investigators have anyway? There's a "demigod," a rock, a translator, "BVG," a ghost, The Perfect Prosecutor, a heart surgeon, and more! If the investigation doesn't pan out, they can at least make that Buckaroo Banzai sequel, finally.

The State Department's Science Envoy, Daniel Kammen, quit in a sternly worded letter that spells out, "Impeach." Clearly he's been hanging out with the former Arts and Humanities Commission!

Deep down inside, Exxon knows climate change is real, but it's still praying that Raptor Jesus can just make everyone forget.

A new Energy Department study finds that fossil fuel consumption is declining in favor of more renewable power sources, so DOE is recommending we invest many Ameros in coal and nuclear power. After all, we can't let China lead the way in fashionable respirators and goggles, can we?

The Justice Department is fighting a suit against Trump's religious liberty executive order with the argument that it's not promoting religious speech, it's simply not asking questions about what that speech is saying with all that money.

Former Trump campaign aide Michael Caputo's new shenanigans involve the all sorts of behind-the-scenes buggery that could screw up the way we deal with trademarks and patents for years.

The judge presiding over the trials of five Gitmo detainees accused of conspiring in 9/11 attacks can't see the Top Secret stuff that might prove reasonable doubt. He probably just didn't get a psychic to ascertain the answers.

John Kelly is trying to control what papers Trump sees while he's sitting in the Oval Office, so expect to see internal memos and policy being tweeted by ex-President Bannon and Tea Party crazies with an axe to grind.

The RNC will defend its nominees even if Trump wants to tweet out insults and burn down barns across rural America.

It's getting a lot harder for civil servants to avoid partisanship now that their leadership is swimming away from the sinking ship captained by Donald Trump.

Montana Republican Rep. Greg Gianforte is still dodging the Guardian reporter he bodyslammed the night before Montana's special election. It's almost like he's trying to avoid going on the record, or being forced to ap..apollo...apple-o-jeez.

Julian and Joaquin Castro are worried about stepping on each other's toes as they make their bids for higher office, like governor or president, so they're making sure that neither comes across as the evil twin.

Baltimore poors in Kushner properties are being thrown in debtors' prisons, and according to one lawyer involved it's "something out of Charles Dickens." It certainly isn't the best of times...

Prince Kushner's real estate company just lost its damage control PR specialists after Trump's Nuremberg speech scared them away. I wonder who will help them with accusations of debtors' prisons in Baltimore now?

Mike Pence says the US will use "economic and diplomatic power" to promote democracy in Venezuela, purposefully avoiding any talk about expanding WWIII beyond the Middle East and South Asia.

US & Russian officials in Syria can't stop calling one another now that they've "worked through some very hard problems." Pretty soon they're going to get an apartment together, and Trump will take them furniture shopping.

That Return of Kings MRA douchenozzle thinks Nazis are being censored and that Charlottesville will be some kind of "digital rights Kristallnacht," which is ironic considering he's a shade too Not-White to be welcome in the "alt-right" neo-Nazi paradise.

IJR's resident plagiarist didn't bother to check his facts (again) when he wrote a story about Boston antifa protesters sourced from a fake Twitter troll account.

The Editor of the WSJ is butthurt about all the negative Trump coverage his reporters keep filing, so he's been telling the overworked ink-stained wretches to fudge their facts.

And here's your morning Nice Time! A DIK DIK!

WE NEED YOUR MONEY! Seriously, we're behind this month and our loyal readers (like you!) are the ones who make the Agenda, 'splainerings, dickjokes and Nice Times possible.