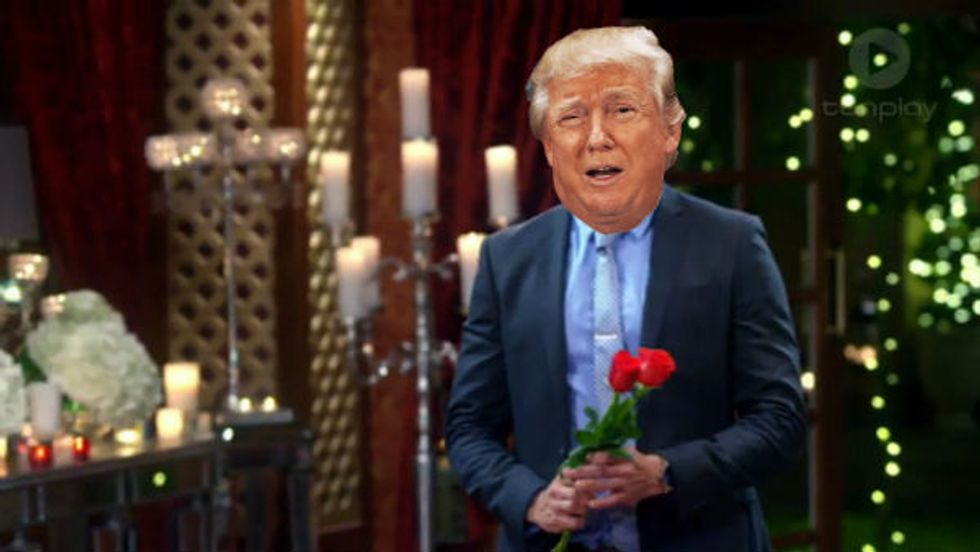 That being said, Donald Trump has a 39% approval rating LOLOLOLOL OMG WTF HAVE YOU EVER HEARD OF A BIGGER LOSER IN YOUR ENTIRE LIFE? Like, this is unheard of for new presidents. Now, during Trump's presser, he bragged about that outlier Rasmussen poll that showed him with a 55% approval rating, but all sentient beings know Rasmussen is bullshit, and only exists to give fake news rimjobs to Republicans. Pew, on the other hand, is for grown-ups with normal-sized hands.

Compared to the Barack Obama, the sexxxy, kind and smart president who came before him, Trump is REALLY getting pissed on by a Russian hooker in several categories, as you can see in this graph:

Looks like Americans overwhelmingly agree Trump is a liar who can't string together a sentence, and also a stupid bumblefuck idiot. At the same time in his presidency, Obama was viewed as an honest man, a smart man, and a brilliant communicator. HAHA, TRUMP, CAN'T STOP LOSING TO THE BLACK MAN, CAN YA?

Another tidbit: only 28% of Americans -- very stupid Americans, we might add -- believe Trump is "even-tempered," whereas 68% of Americans -- the kind who can find their ass with both hands and know paint is not food -- say he is not. This is because Trump is a whiny ass titty baby who has temper tantrums on Twitter and screams FAKE NEWS! about ILLEGAL LEAKS!, because he's apparently so unhinged at this point he doesn't realize that the leaks cannot simultaneously be fake news AND real classified information.

What a silly goose!

Finally, solid majorities of Americans agree Donald Trump makes them feel neither hopeful nor proud, because there is literally nothing about Trump to be proud of. As for hope, everybody can already tell he's hopelessly bad at everything, and should immediately resign in disgrace, before he gets impeached or Vice President Mike Pence slaps him with the Article 25 Banhammer Of Kicking Presidents the Fuck Out of the Oval Office.

In short, Donald Trump is the Biggest Loser, he is the Weakest Link, he should be You're Fired, and then Sashay Away, for being the most useless human being in the history of these United States.

Liked this story? US TOO. Now give us money, we are ad-free and supported by Readers Like You.