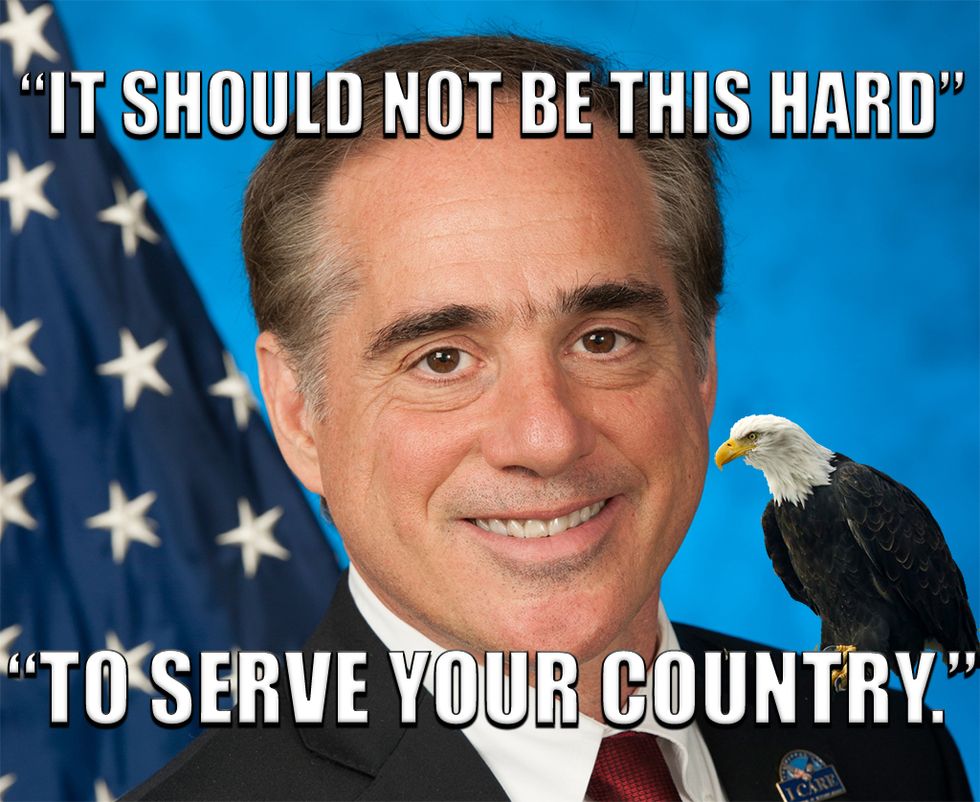 Morning Wonketariat! If you're in come out and see your editrix TONIGHT at Schlafly Tap Room, 5 to 7 p.m.! GUYS, we are CANCELLED for tonight due to Wonkebago breakdown! Now here's some of the things we may be talking about today.

In order to draw attention from his ongoing legal troubles, Trump finally "You're Fired" VA Secretary David Shulkin. Trump will replace Shulkin with White House doctor Rear Adm. Ronny Jackson, a nice guy who has no experience with management.

Shulkin has shot back in an op-ed this morning, denouncing efforts to privatize the VA from political appointees who have turned Washington "toxic, chaotic, disrespectful and subversive," concluding, "It should not be this hard to serve your country." The nerve of this commie, advocating socialized medicine for veterans!

The right wing appears to have has shifted gears and is openly attacking Robert Mueller's past, potentially laying out the runway for Trump to "You're Fired" him.

Since congressional Republicans can't stop complaining, the DOJ inspector general will investigate whether or not the FBI illegally spied on Carter Page while Page was acting as a ("idiot") Russian spy.

ProPublica reports that Sen. Chuck Grassley has put Capitol Hill's resident conspiracy theorist, Jason Foster, in charge of the Senate's Trump-Russia probe in order to sow doubt and shill bullshit about the FBI and Robert Mueller.

After several Parkland teens failed to get into their top-choice colleges, Laura Ingraham rubbed their noses in it by saying petty and childish things on Twitter, like an adult.

A radio corporation is going to syndicate the Ben Shapiro podcast because, apparently, America needs to validate the insecurities of white men who get anxious when they see a woman CEO or black folks in their neighborhood.

JEB! emerged from his hidey-hole to lecture at Yale and stated, unlike Trump, JEB! gets to go home to kids who actually "love" him. Of course, seeing someone piss all over his father (again) caused Eric Trump to say something edgy.

Trump liked the new Roseanne, now the entire Washington press corps is going to have to watch Roseanne and write a political analysis instead of actual news.

Here's an infographic of the omnibus spending bill, just in case you wanted to see where $1.3 trillion is going. Spoiler Alert: It's defense.

Later today, Trump is expected to fly to Ohio to rant about infrastructure spending, then he'll fuck off to Florida to play golf and shitpost on Twitter.

The VA hired more than 6,000 people without first conducting proper background checks during their first 14 days on the job, the federally mandated standard. Good thing the new guy at the VA knows all about patient confidentiality...

Under Betsy DeVos the Department of Education has been yanking federal TEACH grants and changing those grants into loans for minor paperwork errors. Initially started in 2008, the grants were offered to college students provided they spend four years teaching things like math or science in low-income communities. Fucking #MAGA, right?

North Dakota Democratic Sen. Heidi Heitkamp is defending her stance on the Second Amendment, likening the passionate debate to that of abortion rights. I'm not an expert on babies or guns, but I'm pretty sure an unborn fetus can't go on a killing spree.

Colorado's 6th Congressional District is a battleground for thirsty Democrats hoping to capitalize on the rage reverberating throughout suburbia.

Andrew Janz is challenging Devin Nunes for California's 22nd Congressional District, and even though he's considered a longshot, Janz raised more than $1 million in the first quarter of 2018, despite a pledge to eschew corporate PAC money. Nunes's warchest is much larger, and you can donate to Janz here.

Super-rich folks in Orange County love Trump's anti-immigrant dog whistles, even as the local government faces opposition from a rising tide of bleeding heart and tree-hugging liberals for the first time in decades.

This June the state of Maine will experiment with ranked-choice voting, but the venomously divided state legislature is creating a perfect storm for an electoral catastrophe.

Somebody showed Trump pictures of a Calexico border wall replacement project, and he immediately assumed his wall was being built -- despite the fact that he hasn't chosen a plan, contractor, or even secured land rights. Oh, and Mexico still refuses to pay for it.

The Ecuadorian Embassy in London has essentially grounded Julian Assange (again), revoking his Internet for screwing around in the foreign affairs of other states. Apparently they want him to sit quietly and think about what he's done.

Pro-Russian separatist forces in Ukraine (AKA: Russia) have deployed a new anti-drone weapon to knock any flying gizmos out of the sky, and nobody knows what the fuck it is.

The FCC wants to ban Chinese tech hardware from being bought with federal broadband funding over long held fears of espionage, and (coincidentally) give a big, fat win for big telecoms and ISPs. It's a win-win for Ajit Pai.

Apple CEO Tim Cook gave some rather bullshit answers regarding a number of topics while in Chicago to promote new overpriced crapware for wealthy school districts and students. We know because we were there.

A Chinese space station will slam into the Earth's atmosphere between Saturday and Wednesday, luckily there's only a 10% chance it won't break apart upon reentry. Hurray...

We're 100% ad-free and reader supported, but we'd love you forever if you bought us coffee...or whiskey.