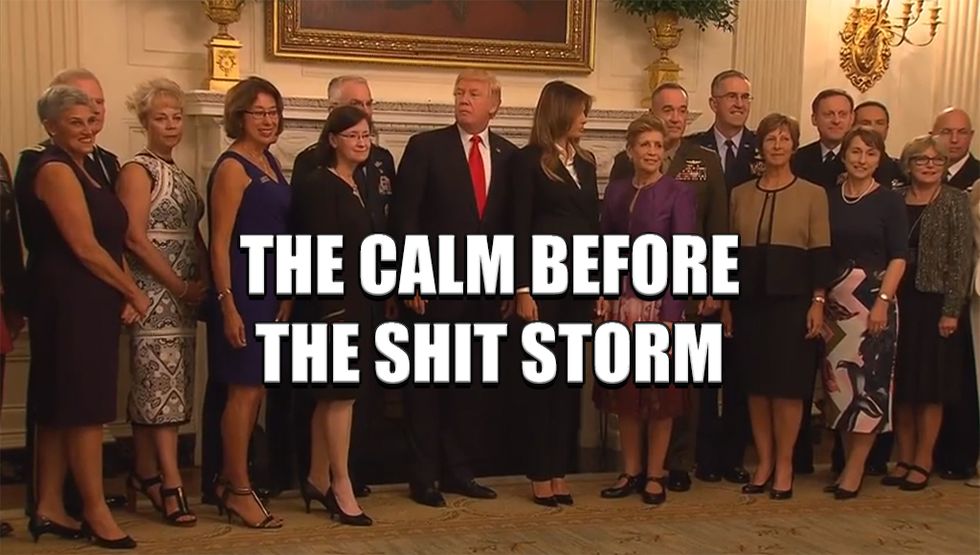 Last night, during a photo-op with military brass, Trump remarked that, "Maybe it's the calm before the storm," then proceeded to dodge follow up questions as the wives shot steely-eyed daggers and gritted their teeth. [Video]

Now that Trump says there's nothing to worry about in Puerto Rico, FEMA has scrubbed info from its website that details how many people have water and power. So that's helpful.

Trump is personally grabbing the ACA by the pussy and ripping apart health care, just like he did in Iowa.

Republicans are stumbling and stammering every time you ask them how the Trump Tax Cuts (for the rich only) will help the poors.

Stephen Miller is spearheading Trump's DACA maneuvers, and the word on the Hill is that Trump's White House will slash immigration in order to fix DACA. Thanks, dick.

Trump wants to SAY he's bailing out on the Iranian nuclear agreement, but he also doesn't want to actually do anything about it, like reimpose sanctions.

Mike Pence is about to get his own Handmaid's Tale and force all you filthy working class sinners to have babby in a new rule that will allow any company to claim moral/religious exemption from contraceptive coverage..

Is Trump about to "You're Fired" REXXON and replace him with CIA Director Mike Pompeo? Maybe, it's Axios, so who knows whose salad was tossed for this story.

In an effort to keep the adults in charge, REXXON, Steve Mnuchin, and James Mattis have ALLEGEDLY formed a "suicide pact," that way Trump can't just "You're Fired" someone every time he gets a bug up his ass.

Steve Mnuchin's fabulously wealthy life is full of jet-setting too! Mnuchin is now on the hook for $800,000 in flights aboard MILITARY aircraft. #BetterThanYou

Jeff Sessions's DOJ is investigating Harvard over claims that it is being racist by following affirmative action policies that exclude the other rich kids.

John Kelly couldn't figure out why his phone was all fucked up, so he took it to some nerds who told him that his personal phone had been hacked for months.

The Family Research council is pulling out the big gay bashing, brown hating, wall building guns for its Value Voter Summit this year. They're trucking in Former President Bannon, Michele Bachmann, Kellyanne Conway, Sebastian Gorka, Mike Pence, Trump and Pence, and even Steve Scalise, who would be dead if a black lesbian cop hadn't saved his gay-hatin' ass.

People in Rep. Tim Murphy's office were living in fear of Murphy and his mistress, feeling powerless as they watched them act like that disgustingly cute couple at parties, and treat everyone around them like dog shit.

Strap yourself in and secure your coffee in a sippy-cup before you read about how JPMorgan Chase paid off its share of fines from the 2008 debt crisis with imaginary mortgages it didn't have in an effort to con taxpayers.

All of those for-profit charter schools Betsy DeVos loves to put on a pedestal have been jiggering their student enrollment numbers, allowing them to reap profits while students are essentially dropping out.

Big telecoms' favorite Congress critter, Rep. Marsha Blackburn is running for Senate in Tennessee to replace Sen. Bob Corker, and we can't wait to remind people how much evil corporate cash is spilling out of her pockets.

Russia is super pissed that Canada is about to pass its own Magnitsky act to combat Russian fuckery and corruption, and Russia is threatening to ban Canadians from entering Russia. Honestly, I don't think Canadians will be apologizing for this one.

The NSA has been caught with its dick in its zipper after MORE super secret cyber weapons were caught on a personal laptop that happened to be running Russian-based security software, and you'll never believe how they hacked in!

Congress is being all wishy-washy on whether or not to make political ads on Facebook and Twitter transparent. Crom forbid we actually treat political speech equal, regardless of platform!

According to some L E A K E D emails, it's not that Milo Yiano-whatever loves Nazis, he's just a cog in a big Breitbart machine that really hates jews, black people, and all the other non-Aryans, that is trying to build the alt-right with the aid of shadowy megabucks from Silicon Valley (and, as always, the Mercers).

HEY EVERYONE! Join us in doing all the things that that put you on Former President Bannon's "Shitlist."

The cop who tackled tennis pro James Blake in the middle of Manhattan back in 2015 is suing him for defamation after Blake called him an "out of control and corrupt officer" in his book. Apparently, the poor baby had his feefees hurt AND got stuck driving a desk.

Break out the bongs and beers, those hippy do-gooders at the the International Campaign to Abolish Nuclear Weapons (ICAN) have won the 2017 Nobel Peace Prize for their efforts to slut shame countries who love the bomb.

We need your money! Every Amero you give us helps to keep writing 'splainers and newses! Do your part!