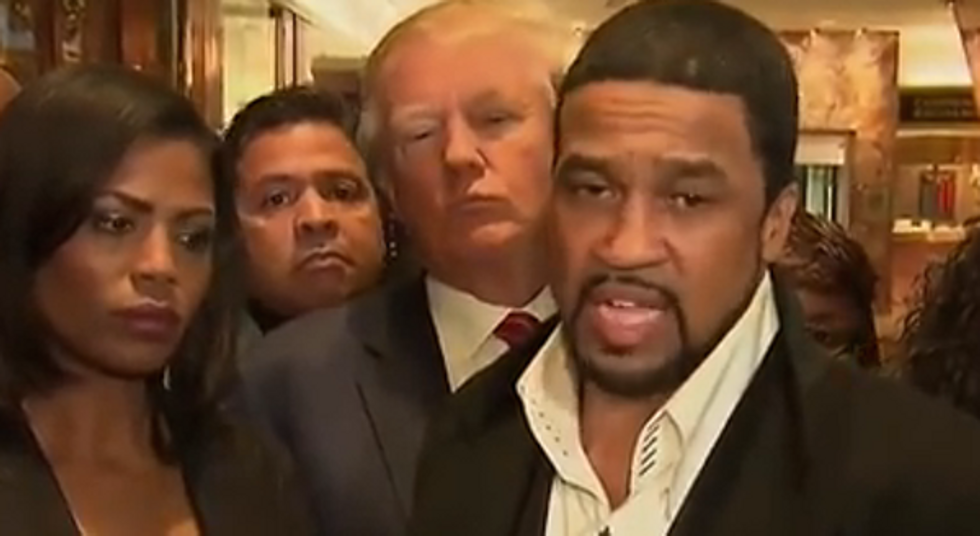 Oh hey! Remember yesterday, when Trump had that nice meeting where he talked all about how the media was mean to him and thought Frederick Douglass was alive and then had a bunch of black people shower him in compliments? And remember how that Pastor Darrell Scott told him all about how he had a meeting with all the TOP GANG THUGS of Chicago, who naturally all loved Trump and thought he was swell? And they wanted to meet with him to talk about "reducing the body count" in exchange for social programs?

And probably you were picturing something like this scene from the Godfather?

Except with not a bunch of old white dudes?

Well, get ready to be knocked down with a feather ... but it turns out that Pastor Darrell Scott was lying!

You see, Pastor Darrell Scott did not, in fact, meet with any "top gang thugs," nor any lesser "gang thugs," and is now actually admitting it.

According to a report from DNAInfo Chicago, "Scott said the people he spoke with include the Rev. Corey Brooks of New Beginnings Church; Kublai Toure, a longtime activist and former Chicago firefighter; and Torrence Cooks."

Rev. Corey Brooks is a dude who is pretty damned unpopular in Chicago after having backed Governor Bruce Rauner (and later, as if by magic, was appointed to a sweet gig on the Illinois State Toll Authority Board), and has not ever been in a gang. Kublai Khan Mohammed Toure is a community activist in his 60s who was in a Black Power group in his youth (not a gang!) -- and judging by what I am reading of him, does not seem like he'd be too inclined to be incredibly pro-Trump. I could be wrong, but he does not seem like the type. Torrence Cooks appears to work for Chicago Public School systems, though in what capacity, it's difficult to tell, as there is not much information on him available online.

Using the term "top gang thugs" is pretty damned gross in its own right, but referring to a Reverend and a community activist who were not even in gangs as "top gang thugs" is absolutely reprehensible, if not just downright bizarre. I keep trying to think of an equivalent to that, but I cannot. It is that stupid.

Clearly, Pastor Scott was trying to earn favor by telling Trump how beloved he was by Chicago gangs. Perhaps he saw all the other African-Americans in the room, felt competitive, and was hoping to earn the exciting distinction of Trump calling him "MY African-American"? Maybe we could give him the benefit of the doubt and assume that he did so in hope of getting money for social programs, given how Trump so loves it when people compliment him?

If so, that does not appear to have worked, given that Trump was still all "NO, SENDING IN THE FEDS" about stuff anyway.