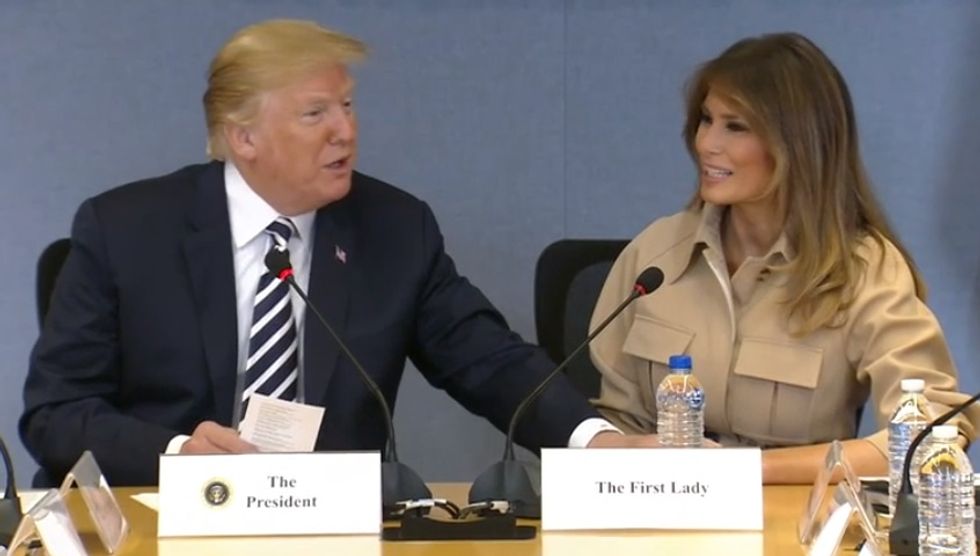 It's not clear where Melon planned to go on safari, but she was ready.

Donald Trump went to a very important meeting at the Federal Emergency Management Agency (FEMA) yesterday, where he and his cabinet were supposed to discuss how FEMA and the rest of the government will prepare for the 2018 hurricane season. It's really important stuff, especially since there's so much evidence that the government wasn't at all ready for the three huge storms that hit last year. In a normal government, meetings like this are a chance to discuss what went well and not so well previous years, to improve preparedness for the coming hurricane season.

You may have noticed that this is not a normal government.

Instead of wasting time on "governing," which is very, very boring, Trump used the private portion of the meeting -- about 40 minutes -- to chat with all his friends in the cabinet about what a tremendous job he's doing and what a popular guy he is, according to a recording of the closed-door meeting that some patriot leaked to the Washington Post.

Despite the recent Harvard study suggesting the death toll in Puerto Rico may be in the thousands, Trump never said anything about those who died in Puerto Rico, or for that matter about the people in Houston who still haven't gotten help rebuilding their homes. That stuff isn't interesting, and nobody's praisedTrump for it, therefore it does not exist. Instead, he praised Florida Gov. Rick Scott, who's running for the US Senate, for the fantastic job Scott did getting electrical workers to Puerto Rico (which nonetheless still has some 11,000 people without power -- but don't worry! The entire island ought to have power back in another two months so they can prepare for the one-year anniversary of the storm).

Trump did take the time to mention that the Puerto Rican power utility had gone bankrupt before the storm, so we know none of the deaths or botched recovery can be blamed on his administration. Also, during the preliminary portion of the meeting open to the press, he mentioned that last year was unusually bad and things were "tough":

That would be in the entire history that he's tracked hurricane activity, you know, which consisted of him glancing at his notes. Trump also glanced at some impressive numbers about all the people the US Coast Guard rescued in Houston during Hurricane Harvey, and made up some shit on the spot. Hey, if it was the "Coast Guard," then every single one of those rescues must have involved dummies who went out on the ocean during a hurricane, because what else would the Coast Guard be doing?

"Sixteen thousand people, many of them in Texas, for whatever reason that is. People went out in their boats to watch the hurricane,” Trump said. “That didn't work out too well.”

You know how we'll reduce the death toll next time in Puerto Whatever? Tell people not to go out in their boats to watch the hurricane. Such dummies!

As for the part of the meeting where cabinet members were supposed to discuss hurricane preparedness, Trump set the pattern quite quickly. Deputy Secretary of Defense Patrick Shanahan was allowed to speak for an entire ten seconds before Trump butted in with an unrelated lie about how he was such a great negotiator that he'd saved over a billion and a half dollars on the new Air Force One (he's lying), and also billions more on fighter jets (which of course are still over budget, and no, Trump didn't negotiate dick).

Trump also returned to one of his favorite insane bullshit claims about how the Navy has to return to using steam catapults to launch jets off aircraft carriers, because Trump does not trust these damned magnets:

“Part of it is, they want to have all new. Instead of having the system that throws the aircraft off the [ship], which was always steam,” he said. “They now have magnets. They’re using magnets instead of steam. . . . They spent hundreds of millions of dollars, I’m hearing not great things about it. It’s frankly ridiculous.”

And that's how the military will be better prepared to help out during hurricanes. And maybe the Coast Guard won't have to go rescue all the stupid wayward boaters.

The whole clusterfuck of a meeting went that way, with Trump bragging that the California gubernatorial candidate he'd endorsed "won" the primary -- by coming in second place and helping Democrat Gavin Newsom avoid an intraparty fight with former LA mayor Antonio Villaraigosa -- and bragging that there will be no blue wave this fall, because some polls show better results for a generic Republican in some races, although Trump also said he'd never heard of generic polls before and didn't quite trust them, possibly because they are powered by magnets, not steam.

Let's just recall that it wasn't just the cabinet brought in for this meeting -- there were also a whole bunch of regional emergency management officials conferenced in on a secure line, so they could prepare for a hurricane, or at least least get a very secure version of the happy economic bullshit Trump burbles about every time he calls "Fox & Friends." Hey, why would they need to talk about blue tarps when unemployment is way down and the stock market is simply tremendous?

Trump also took a moment to tell Energy Secretary Rick Perry he needs to have a press conference about how wonderful coal is, and then the meeting was over. Trump simply couldn't believe how fantastically successful the meeting was:

“Our level of popularity is great,” he added.

Obviously, he meant this very report about his great cabinet in Wonkette. And if you don't believe Trump's cabinet is simply the greatest, just look at this clear video evidence of how well Trump has his vice president trained:

I am laughing so goddamn hard at this video of Trump inexplicably putting his water bottle on the floor, and Pence immediately doing the same for no reason whatsoever. pic.twitter.com/qEFPzKClYj

We haven't seen such deeply reflexive toadying since the last time we looked in the mirror while agreeing with Yr Editrix.

We're still convinced Mike Pence is plotting for the beautiful day when he can take over the Big Grift, but until then, he's doing a tremendous job, just great, of convincing Trump he's put his somatic nervous system in a blind trust.

Good luck with those hurricanes, America! You'll do great! And if not, you'll still be told you're doing great!

Yr Wonkette is supported by reader donations. Please click here to fund independent thinking, brought to you by writers who know their Editrix is the greatest thing since bottled water.