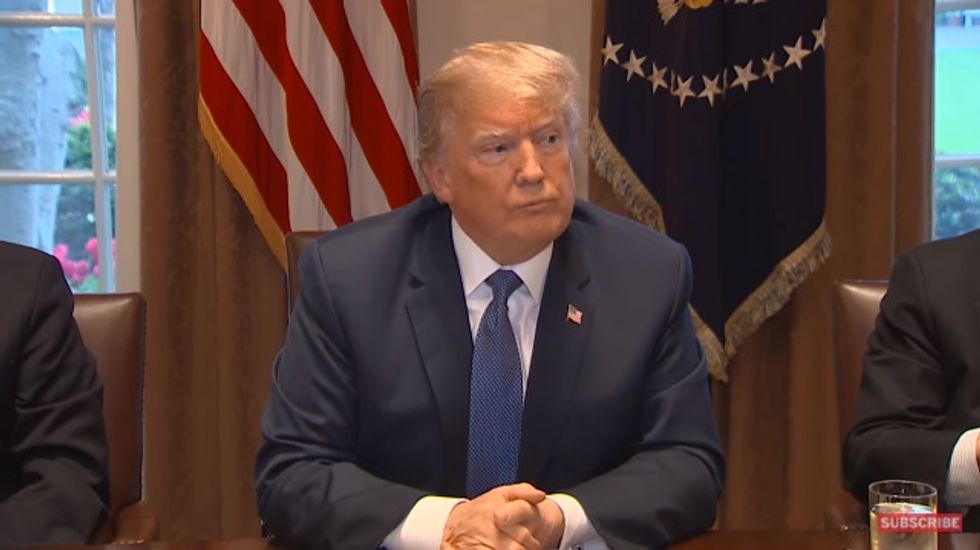 Donald Trump is back from celebrating himself in honor of Memorial Day, and he has a new crazy fucked up lie to tell the paste-eating human cow patties who still support him:

The 13 Angry Democrats (plus people who worked 8 years for Obama) working on the rigged Russia Witch Hunt, will be MEDDLING with the mid-term elections, especially now that Republicans (stay tough!) are taking the lead in Polls. There was no Collusion, except by the Democrats!

All the usual lies are there -- that Robert Mueller's team is 100% Democrats, that the Russia investigation is a witch hunt, that Republicans are actually doing well in the polls. Oh, and that there was NO COLLUSION NO COLLUSION DEMOCRATS ARE THE COLLUSION!

But the idea that Robert Mueller would himself, personally, meddle in the midterm elections like a common Russia? That is new and special! You guys didn't think Democrats were going to do a blue tsunami in November without Donald Trump calling it #RIGGED, did you? Heck nope! That's not how wannabe authoritarian tinpot dictators do elections! The only valid election result is the one where Donald Trump, or his party, wins BIGLY.

But wait, what does he think Mueller is gonna do? Is Mueller gonna make fake news memes, like Russia did for Trump, and put them on Facebook? Is Mueller gonna buy some hackers and get them to hack Republicans, so they can spill all their emails on the internet, the way WikiLeaks (a Russian front) did for Trump? WHAT'S BOBBY THREE STICKS GONNA DO, PRESIDENT SHIT-FER-BRAINS?

Perhaps the president hasn't thought this one through yet.

Regardless, let the record show that, while Trump is attacking the Justice Department yet again, he is also managing to attack the integrity of elections that HAVEN'T HAPPENED YET, elections that the intelligence community and even Mike Pompeo have said Russia will absolutely meddle in, an issue the Trump administration refuses to do anything about, because to do so would require the president to acknowledge that his election "win," which was totally pathetic in the first place, was also probably not legitimate.

Also please note that Trump has a pretty long pattern of accusing the other side of doing whatever he's doing, so it's worth asking what kinds of conspiracies Trump is already involved in to try to steal the midterms for his shithole political party.

So this is fun! Happy Tuesday!

El Dipshit has had a lot of free time this morning to mash out words on his magic Twitter box, as opposed to other days, don't know why. Here, Trump yet again quotes Mollie Hemingway, one of a few American citizens who may be stupider than Trump:

“This investigation involved far more surveillance than we ever had any idea about. It wasn’t just a wiretap against a campaign aide...it was secretly gathering information on the Trump Campaign...people call that Spying...this is unprecedented and scandalous.” Mollie Hemingway

Why aren’t the 13 Angry and heavily conflicted Democrats investigating the totally Crooked Campaign of totally Crooked Hillary Clinton. It’s a Rigged Witch Hunt, that’s why! Ask them if they enjoyed her after election celebration!

What a fun alternate reality, where Hillary Clinton and the Angry Democrats celebrated stealing the election from herself! Ooooh, did she do a coven, naked in the moonlight? We bet she did that and the 13 Angry Democrats did spells of newts and made Don Jr.'s face like that.

But really, Trump is above all this and doesn't have time to focus on RIGGED CROOKED HILLARY WITCH HUNT, what with his extensive schedule of Executive Time and such:

Sorry, I’ve got to start focusing my energy on North Korea Nuclear, bad Trade Deals, VA Choice, the Economy, rebuilding the Military, and so much more, and not on the Rigged Russia Witch Hunt that should be investigating Clinton/Russia/FBI/Justice/Obama/Comey/Lynch etc.

The Fake Mainstream Media has, from the time I announced I was running for President, run the most highly sophisticated & dishonest Disinformation Campaign in the history of politics. No matter how well WE do, they find fault. But the forgotten men & women WON, I’m President!

Trump spent Memorial Day weekend bitching on Twitter too, but we're not pasting those, because fuck him.

Apropos of nothing, the New York Times has a piece about how Dear Leader Numbnuts actually sometimes has a method to his loudmouth shit-tweeting. No, for real! (Unless NYT is wrong, which has never happened ever.) According to people close to Trump, he used to not use the phrase "Deep State" because he didn't want to sound TOO MUCH like a crank. Apparently now he is OK with sounding too much like a crank, because it goes over well with Fox News idiots, therefore he bitches and moans about the Deep State all the time.

Hahahaha, fuck the New York Times, there was never a time when the batshit orange motherfucker squatting in the Oval was worried about looking like TOO MUCH of a crank.

This is just who he is: a damn loser with a broken brain who lost the popular vote by millions to a girl, who is bad at business, who is really yucky to look at, and whose hands are itty bitty like kitty cat paws.

We'd feel sorry for him, except for how he doesn't deserve our compassion, THE END.