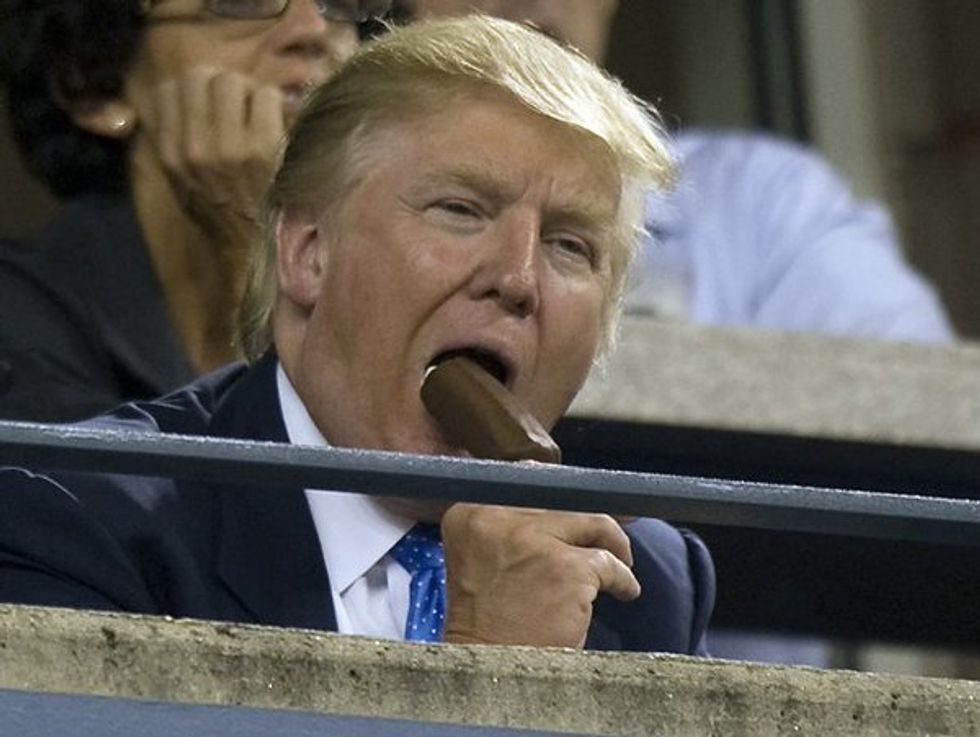 Though Wonkette is America's Oldest War Blog, we are not nuclear weapons experts. But today's news that North Korea has developed the ability to do Honey, I Shrunk The Kids to its nuclear warheads, as broken by the Washington Post, is very scary and very big. On the heels of the United Nations Security Council (with agreement from Russia and China!) smacking North Korea with YOOOGE new economic sanctions, today's news, based on a Defense Intelligence Agency (DIA) report from last month, suggests the rogue state is quite a lot further along in its quest to be able to shoot a nuke at the continental United States. WHOA AND SCARY if true!

As we said, we are not a nuclear expert, so after you're done with this post, head to the WaPo for all the details.

But please rest assured that your president, Donald J. Trump, is SANE and a GROWN-UP and understands his JOB, and that, even if he is on golf-cation at Bedminster, he has his eyes laser-focused on protecting America, and on working with our allies and our half-allies and even hostile nations to protect THE WHOLE WORLD from this emerging ...

That was Trump's first tweet after this breaking news, which is WALL TO WALL on the news networks right now, including Fox. But don't worry, we're sure he's preparing to reassure a jittery nation any minute that he and his excellent team of national security advisers will ...

This is the only song he knows how to play. He doesn't know how to be the president of the United States, because he's too much of a thin-skinned pussy to pay attention to anything but his own petty grievances. He knows how to brag about himself, even though he has literally nothing to brag about, such a fucking loser is he.

Now, this is not to say that there is no fluttering activity at Bedminster, or that the president hasn't been pulled away from the very important conversation he was having with his two scoops of ice cream in order to be given a 30-second flash card presentation featuring pictures of nuclear bombs and Kim Jong Un's face, with the occasional picture of Hot Pussy thrown in, to keep his attention. We are simply noting that, while this breaking news is reverberating around the world, President Fuck-Bonkers has ten fingers on his Twitterphone and his entire head up his asshole, bitch-tweeting about Hillary Clinton and the fake news.

And to be completely fair, Trump did just now, at some event about the opioid crisis, say North Korea will be "met with fire, fury and frankly power," according to frankly Fake News CNN. So it's all better now and you feel completely safe. Ayup, you bet. (Did he just threaten to nuke them? Fucking hell.)

Vice News is out with a hilarious/sad report that says twice a day, Donald Trump is hand-delivered a folder of only the most glowing news ABOUT HIMSELF, and that it's so egregiously bullshit that folks in the White House actually call it the "Propaganda Document." According to Vice, it's prepared around 9:30 AM and 4:30 PM, and we assume Trump gets it soon after. So, according to our well-honed clock-readin' skills, that means Trump should be getting his Trump Porn document full of sexxxxy Good Trump News in a little over an hour, which will presumably distract the Pussgrabber-In-Chief from the Hillary Clinton Fake News voices in his head, which are in turn distracting him from actually doing his job as president of the United fucking States.

America, this is your reality.

Wonkette salaries are fully paid by loving folks like you! If you love us, be generous and help fund our salaries by clicking below!