Trump Reminds Farmers They're White Like Him. Wonkagenda For Tues., Jan. 9, 2018 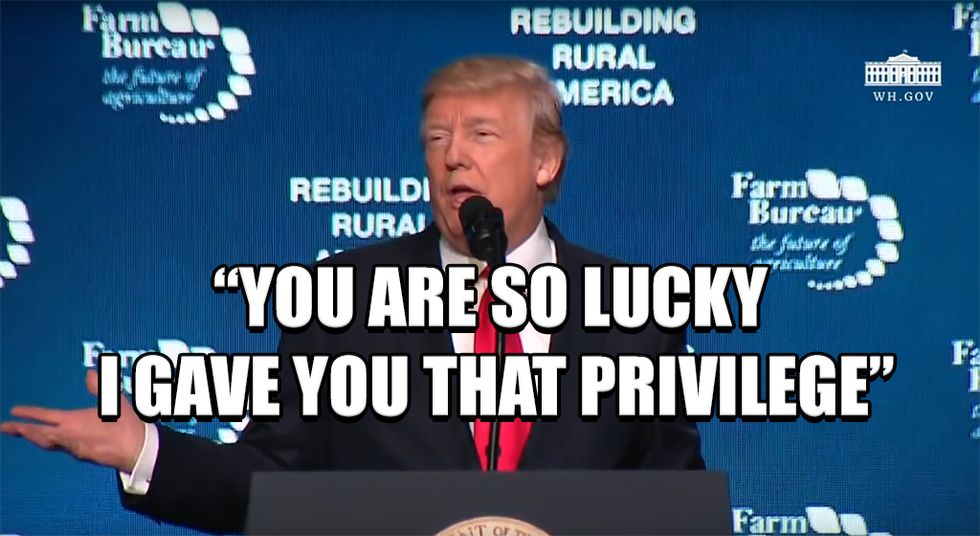 Devin Nunes has secretly been fucking with Section 702 of the FISA provisions in order to slow down and/or stop Trump-Russia investigations.

In continuing efforts to kill the Trump-Russia investigation and the FBI, Republicans have moved on to bitching about the media, and leakers.

Milo Yiano-whatever has "You're Fired" his lawyers -- or they you're fired him -- and will represent himself in his suit against his book publisher after his lawyers refused to show him documents labeled "attorney's eyes only." His former lawyers stated, "Plaintiff's lack of cooperation in this regard has rendered MSF's representation of Plaintiff unreasonably difficult to carry out effectively."

"Alt-right" troll Chuck Johnson is suing Twitter after it suspended him for violations of its terms of service, and is claiming that his free speech is being violated. Clearly he's never seen those "No Shirt, No Shoes, No Service" signs.

The creepy racist MRA who was fired from Google for his butthurt manifesto about women in tech is suing Google for being openly hostile towards conservative white douche bros. Google has responded by saying, "We look forward to defending against Mr. Damore's lawsuit in court."

Republicans are trying to blame Democrats for holding up budget agreements that could avert a government shutdown simply because they want to protect the poor, innocent Messican children.

The Trump administration wants to end Temporary Protected Status for Salvadorans, which could force the deportation of up to 200,000 people who have lived in the US since 2001.

The Federal Energy Regulatory Commission threw Rick Perry's coal and nuclear plans in the incinerator due to the probability that it could destabilize energy markets, and instead ordered regional grid operators to submit information about "naturally occurring and man-made threats" within 60 days, delaying any potential rulings until April.

Trump gave a speech to a bunch of farmers and lied through his teeth about all the things he's done, and made sure to remind them of the white privilege he gave them by running for office.

Trump's PR team is in mental damage control as they continue to rebuke claims that Trump is A Idiot and mentally unstable by claiming that he's, "like, really smart."

Mike Pence has been quietly working to screw with baby killing harlots' access to abortion.

Despite KT McFarland having been quit/fired as Mike Flynn's Trump-Russia buddy, the Trump administration is renominating the former Fox News talking head to be the US ambassador to Singapore.

Prospects for the GOP in Virginia are bad as Sen. Tim Kaine is heavily favored to crush whatever race-baiting shitshow decides to run against him.

Trumpkin Republican Rep. Ron DeSantis formally announced his gubernatorial run, surprising nobody. With the House seat held by DeSantis now open, Republicans have to pick from a squad of ex-military empty suits, while Democrats are running a former UN ambassador.

Super rich fast food CEO and ALLEGED wife beater Andy Puzder has been spotted at the White House, but nobody knows why.

A middle school teacher in Louisiana was arrested at a school board meeting after asking why a school superintendent was getting a raise if there wasn't enough money to pay teachers and school workers. [Full Video]

Steve Alford, a Republican state House Rep. in Kansas, doesn't think BLACK PEOPLE should smoke the reefer because of their, and he hates to say it, their genetic predisposition to being drug abusing jazz criminals, at least according to his data points from the 1930s.

The US attorney in Massachusetts has announced the he might prosecute "certain categories of participants in the state-level marijuana trade" even if the state decides to legalize it. What certain categories Mr. US Attorney Man? IS IT BLACK PEOPLE.

California and Nebraska are moving forward with bills to establish state net neutrality laws and consumer protections that would kneecap telecom companies before they can pick pockets.

The Pentagon has decided not to give Pakistan $900 million in security assistance for Coalition Support Funds because there's terrorists who live there.

There's a YUGE oil tanker on fire in China right now, and nobody knows how to avert the seemingly inevitable environmental catastrophe. Good thing that's in China, and could NEVER happen in the US...right? [Morning Maddow]

North Korea has agreed to send a delegation of athletes to the 2018 Winter Olympics in South Korea. Aside from athletes and some spectators, the delegation is expected to include representatives, cheerleaders, and an "art performance group." OK...

Sen. Ed Markey's CRA resolution to reestablish net neutrality has gained the support of 30 co-sponsors in the Senate, triggering the threshold for a floor vote, signaling net neutrality as a key platform policy heading into 2018 and 2020.

A growing trend in cybercrime is the unwitting installation of cryptocurrency miners that secretly harvest magic Internet money, and screw up your phones and computers.

And here's your late night wrap-up! Stephen Colbert had some Cliff's notes for Fire and Fury; James Corden wondered where it all went wrong with Bannon and Trump; Jimmy Kimmel is thinking about what Mike Pence is thinking about; The Daily Show broke down Trump's brain smarts; Jordan Klepper talked about the GOP's desire for a super special prosecutor.

COOL people give us money because they like us, and want us to stay ad-free. You want to be cool, don't you?