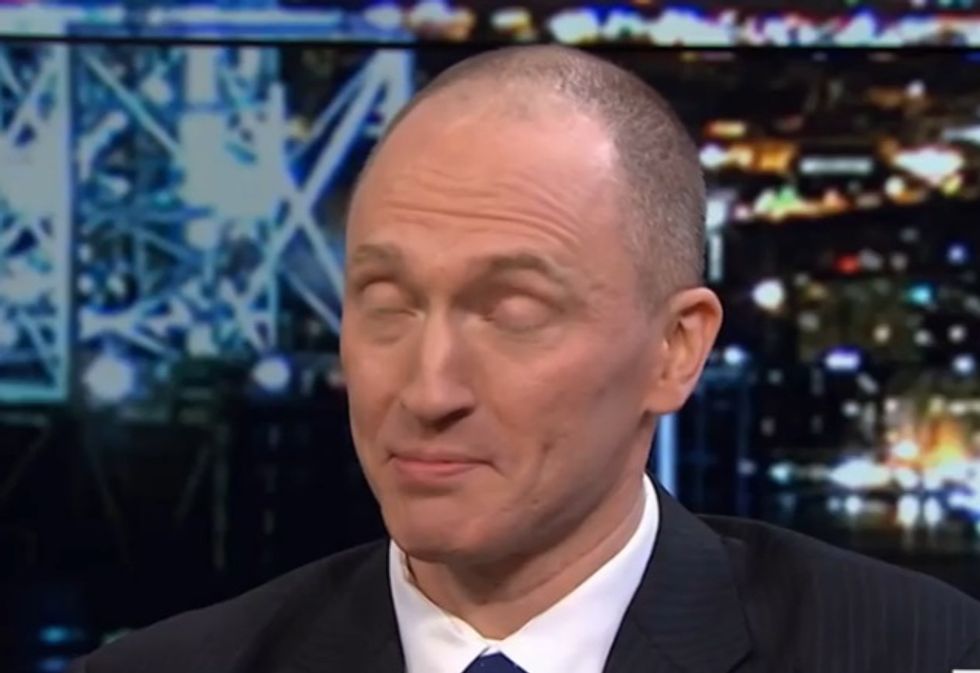 Pity Trump idiot/former campaign foreign policy adviser Carter Page, the stupidest American person Russian intelligence ever did recruit, for he is having a bad week. He swears he is innocent of all Trump-Russia crimes, and to that effect, he wants to testify SO BAD for the Senate Intelligence Committee in order to clear his pure and holy name. More accurately, he probably knows deep in his heart how guilty he is and wants to make sure he gets to go to a fun prison where they get to watch SpongeBob and eat Fruit Roll-Ups.

And bless his heart! He WANTS to turn over all the documents the committee has requested, but he just can't right now, because #reasons. So now he says he's going to "plead the Fifth" on turning over those documents, while still DEMANDING to testify:

Former Trump foreign policy adviser Carter Page told CNN Monday he is going to plead the Fifth Amendment to keep from turning over a "vast array" of documents the Senate Intelligence committee requested, which he said is "beyond the charter" of the inquiry.

But Page demanded an opportunity to testify publicly before the panel, saying he offered to appear November 1 at the committee's open hearing on Russian attempts to influence the election through social media.

Does that make sense? ONLY IF YOU ARE THE SQUIRRELS LIVING INSIDE CARTER PAGE'S PRECIOUS BRAIN.

What's up his ass is that the government ILLEGALLY (legally) pulled a FISA warrant on him last year, with the stated purpose of "If it quacks like a duck, it's probably a Russian spy." Page is a star of the Steele Dossier for traveling to Russia, maybe to facilitate the transfer of a 19% stake in Russian oil conglomerate Rosneft to (????) in exchange for lifting American sanctions. And the Trump administration admits he went to Russia at that time! Also too, KA-CHING! A sale much like that took place just after the election! Probably a crazy coincidence.

Obviously, a FISA judge agreed Page needed to have a "wire tapp" put inside his bottom. Indeed, the application for the warrant stated that Page was "knowingly engaged in clandestine intelligence activities for Moscow." KNOWINGLY.

However, Page has a different belief about the CIA tracking chip that may or may not be implanted under his left testicle, and it is that the surveillance was ordered by the Hillary Clinton Deep #Pizza State. No foolin', y'all! He thinks he's being targeted so Hillary can Clinton Body Count his civil rights with her emails, because of how she hates Catholics like him. REALLY.

Which brings us back to this week! Page doesn't want to hand over documents unless the government tells him all the sexxxy Russian things they caught him saying through the "wire tapp" in his Down Theres. That way he can make sure he doesn't commit the crime of perjury when he testifies:

Page contends that he does not want to be caught in a "perjury trap" since the government has more detailed records about his communications.

PSSSST! Carter Page, sweetheart, babydoll, love of our lives, you fucking dolt: We don't think you're supposed to say that out loud.

If we're interpreting him correctly, he's saying he's REAL mad the gubmint put a tiny CIA man inside his pee hole, to listen to his contacts with the Russians (AND MAYBE TO LISTEN TO HIS THOUGHTS, YOU DON'T KNOW), and he really needs the tiny CIA man to come out and say what he heard, SO HE WON'T FUCK UP AND LIE UNDER OATH.

Does he have brain damage? Has he ever heard of the age-old strategy of avoiding a perjury charge by NOT LYING?

Also, can you plead the Fifth for "documents"? Can you testify AND plead the Fifth? Wonkette resident lawyer Five Dollar Feminist in the Secret Chatcave says "Probably no" and "Oh fuck off."

And what will happen when Page tries to do the thing he can't do? Oh, the Senate Intel Committee will just nut-punch him repeatedly:

In May, Senate intelligence chairman Richard Burr told CNN that Page could face subpoenas if he does not cooperate, warning that the investigation was not "100% voluntary."

He probably eats pizza too. Disgusting.