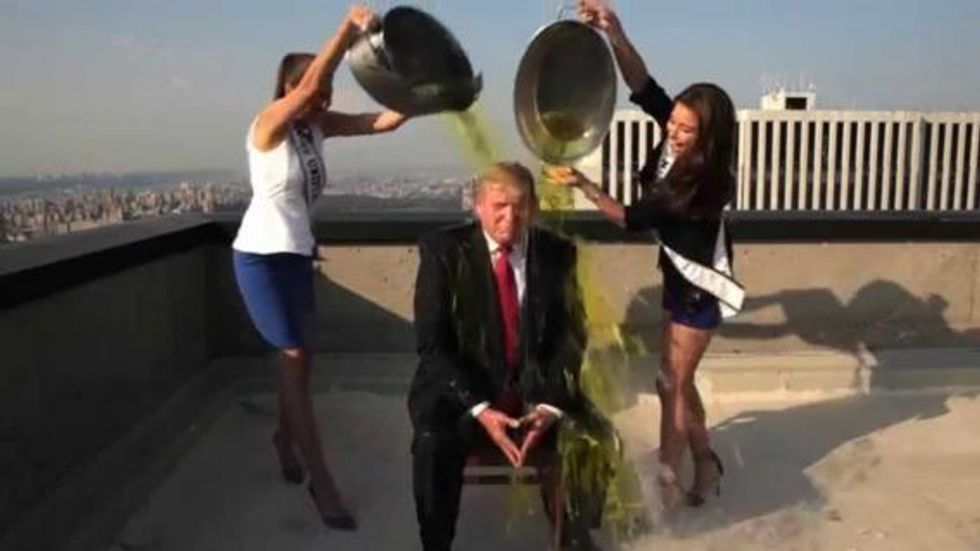 David Corn of Mother Jones was the first person to report on the Steele Dossier, that collection of haikus and sonnets written by British spy Christopher Steele, what alleged BEAUCOUPS collusion between Donald Trump, his associates and Russia, in order to steal the 2016 election. Unfortunately, at the time, America was laser focused on BUT HER EMAILS! and therefore not that many people noticed. The dossier also alleged that Russia has some serious kompromat on Trump, which may or may not involve the current president bouncing in his chair and clapping his hands with a Cialis boner while Russia's finest pee hookers did the pee-pee dance on the Moscow Ritz-Carlton bed where Barack and Michelle Obama once slept.

Certain things in the dossier have beenconfirmed. But the dossier is and always has been raw intelligence, which means it's a STARTING POINT for investigators, and not to be taken as the results of a fully realized investigation.

BUT! In light of Donald Trump Jr.'s Tweeter Confessions about how ayup, he jumped up and down and jizzed his lucky panties when Rob Goldstone, a family pal with ties to Russian pop stars and oligarchs, offered him a meeting with a "Russian government lawyer," promising she would give the campaign some dirty down low dirties on Hillary Clinton's dealings with Russia, David Corn went back to the dossier and found that SURPRISE, Junior's confession actually lines up in some parts, starting with Steele's memo from June 20, 2016:

In that first memo, dated June 20, Steele wrote that Trump “and his inner circle have accepted a regular flow of intelligence from the Kremlin, including on his Democratic and other political rivals.”

Corn then quotes directly from the memo:

Source A confided that the Kremlin had been feeding TRUMP and his team valuable intelligence on his opponents, including Democratic presidential candidate Hillary CLINTON, for several years…This was confirmed by Source D, a close associate of TRUMP who had organized and managed his recent trips to Moscow, and who reported, also in June 2016, that this Russian intelligence had been “very helpful”.

And when did Spunky McTrumpkins start doing condom-free emailing about having a sexxxy meeting with a Russian? That would be June 3, 2016. The meeting happened June 9.

Noting that Rob Goldstone promised Junior gossip that would "incriminate Hillary and her dealings with Russia," Corn flags another part of the memo:

A dossier of compromising material on Hillary CLINTON has been collated by the Russian intelligence services over many years and mainly comprises bugged conversations she had on various visits to Russia and intercepted phone calls rather than any embarrassing conduct. The dossier is controlled by Kremlin spokesman, PESKOV, directly on PUTIN’s orders. However it has not as yet been distributed abroad, including to TRUMP. Russian intentions for its deployment still unclear.

Now, you might be thinking, if the dossier is right and the Russians had been feeding Team Trump delicious Russian dirt on his opponents for "several years" (it also alleges Russia had been cultivating Trump as an asset for FIVE YEARS at that point), why would Junior be so excited to get sexxxy dirt on Hillary in June of 2016? A possible answer is that maybe this was the first time Junior was ever specifically targeted. It's possible Russia considered him a dumb idiot with a bad face and a BP oil spill dead bird on his head, and therefore useless. Also, if Russia was shoveling them dirt on Trump's opponents, they probably used multiple channels to do so. This might have been a new special channel, just for Skippy McDumbShit.

Also, note that the Russians who set up this meeting with Baby Trump got to know his Daddy in 2013 during the Moscow Miss Universe Pageant, the same trip where the dossier alleges Russia got some kompromat on Trump in the form of pee hooker video/audio/claymation re-enactments.

So ... did Junior's confession get us a few "drip drip drips" closer to the pee tape? MAYBE.

It's of course possible that the pee tape doesn't exist. BUT IT MIGHT. (This piece lays out a compelling case for why it DOES.)

Our Wonkette Expert Assessment is that, with Junior making a confession that lines up super nicely with parts of the dossier, and knowing the FBI has already confirmed other key parts of the dossier, the Donald Trump Russian Pee Hooker Tape Forecast has officially been raised to Partly Cloudy With A 50% Chance Of So Much Pee.

You just think about that while you yammer at each other in this, your open thread.

Wonkette salaries are funded solely by readers like you! If you love us, click below to fund us!