Trump Sacrifices His Executive Time. Wonkagenda For Tues., May 29, 2018 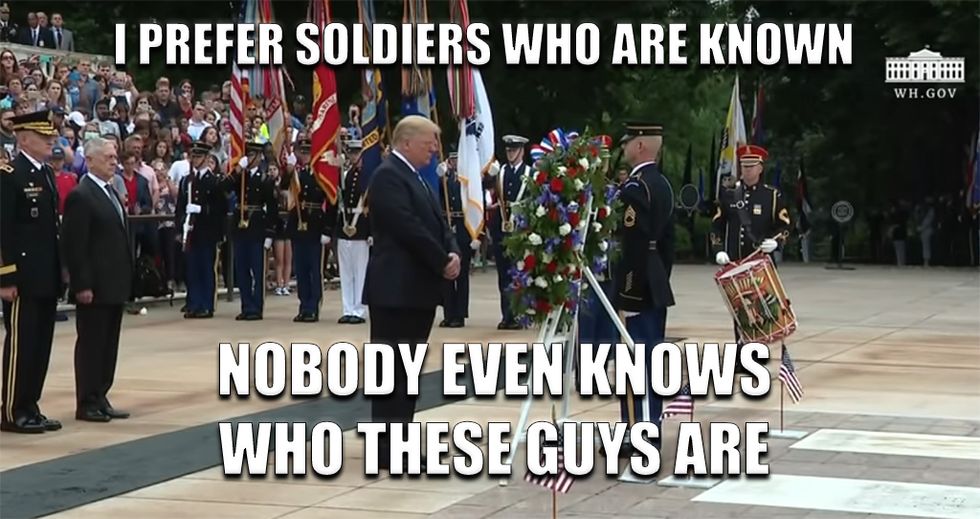 The on-again, off-again bromance between Trump and Kim Jong Un continues this morning as Trump tweeted that a high level delegation of North Korean officials is on its way to the US for a meeting in New York.

Trump now says Robert Mueller is going to "meddle" in the election, just like Russia "meddled" in the 2016 election. We hear the entire government is involved in elections.

Lawyers for Paul Manafort's ex-son-in-law Jeffrey Yohai have quit after Yohai failed to pay his bill or cooperate under the terms of his "singed" [sic] engagement letter.

Of course Donald Trump spent Memorial Day bitching about his "Spygate" bullshit. Did you expect him to have some sense of dignity?

Natasha Bertrand has a great timeline of Trump minions digging for "dirt" on Hillary Clinton during the 2016 campaign.

People close to Trump are admitting that all the paranoid bullshit and buzzwords, like "spygate" and "deep state," are being pushed by Trump because he really is fucking crazy, and it serves as a useful distraction, even if it destroys the integrity of the government.

As the Trump Show enters into sad Season 3, Trump has shrunk his team of advisors to a few cantankerous and rich old white guys who enjoy fluffing him on TV. He's tasked John Bolton with stalking the White House for leaks, and Rudy with running his mouth on TV. Meanwhile, Larry Kudlow just wanders around the West Wing giving fashion advice.

Trump's comms team is now slitting each other's throats in the Oval Office with Axios reporting that Kelly Sadler threw Mercedes Schlapp under the bus when Trump demanded to know who was leaking. TWO WILL ENTER, ONE WILL LEAVE!

Fearing that House Republicans might actually run around Paul Ryan to drop an immigration bill on the floor, the Senate is trying to cobble together a way to give Trump his stupid wall and restore DACA, but it's doubtful.

Kirstjen Nielsen just gave $1.7 billion in grants to cities, even though they've promised to hide all their Mexicans from ICE, and some Republicans are not happy.

Ryan Zinke says he's going to become a tree hugger after finding out it's hard to be an honest hunter if all the forests are chopped down.

Gay hatin' and state breakin' former Kansas Gov. Sam Brownback is thumping his bible across the planet as Trump's US ambassador for international religious freedom, and trying to rebuild his career.

More and more Democrats are pushing single-payer healthcare on the campaign trail after finding it resonates with voters in the suburbs and fly-over country.

Here's a good rundown on the House conspiracy caucus that wants to waste a bunch of money on KILLARY KLINTON.

Fugly and disgraced former brocaucus member Blake Farenthold will keep his job as a rich, douchey lobbyist after a deadlocked vote by the board of Calhoun Port Authority.

Facing the first serious election fight of his career, Devin Nunes is hauling in millions of dollars from big time outside groups to combat attacks at home about all the yellow Trump water he's carrying.

Some Democrats are continuing to rip out pages from the GOP playbook by blaming Trump for rising gas prices, and noting that Trump gave oil companies a YUGE tax break that hasn't trickled down to the pumps.

A day after he gave a rambling press conference where he announced his re-election, Politico reported that Virginia Republican and House Freedom crank Rep. Tom Garrett was treating his staff like slaves, making them clean up dog poop, taxi his family around, and grocery shop. Last night Garrett announced that he's an alcoholic, and is stepping down.

A bunch of fresh faced millennials are on 2018 ballots, and they're doing a damn good job of taking out all the old trash.

A 34-year-old man in Illinois has been arrested on suspicion that he spray painted swastikas on almost 200 headstones, mausoleums and a statue. We hate Illinois Nazis.

Prisoners and civil rights activists are calling bullshit on a new policy in Maryland prisons to limit access to books in order to combat opiate smuggling, with one local official calling the policy a "lazy response to legitimate concerns."

After censoring students and banning editorials, a high school in Dallas-Fort has fired an award winning journalism teacher for encouraging students to write critical and thought provoking stories that the principal didn't like. [via BoingBoing]

Not America is reeling over Trump's trade war as it attempts to avert a global economic crisis.

Congress is absolutely pissed that Trump is greenlighting a US-backed bailout for shady Chinese tech company ZTE despite the concerns from national security and cyber security nerds.

The first plastic-wrapped princess Ivanka Trump has been granted a bunch of patents in China to make books, chatchka crap, and baby coffins. NO COLLUSION!

The Chinese are jumping into the new nuclear arms race and trying to develop their own small nuclear warheads. Thanks, Trump.

Bloomberg has a new report on how Breitbart paid the "Blacks for Bernie" guy to run around telling black folks to either vote for Trump or stay home. [Archive]

The New York Times gives Franklin Graham a big, sloppy blow job as he runs around California bitching to the "godless" heathens and turning the other cheek (for more kissing!) to Trump's white supremacists.

The pharma company that pushed OxyContin onto America knew how addictive synthetic heroin was, and tried to hide it.

Rudy Giuliani went to a Yankees game to celebrate his 74th birthday and was given a very traditional New York greeting. "Boo-urns," they said!

We're ad-free and reader-supported, and we could really use another cup of coffee. Help us out!