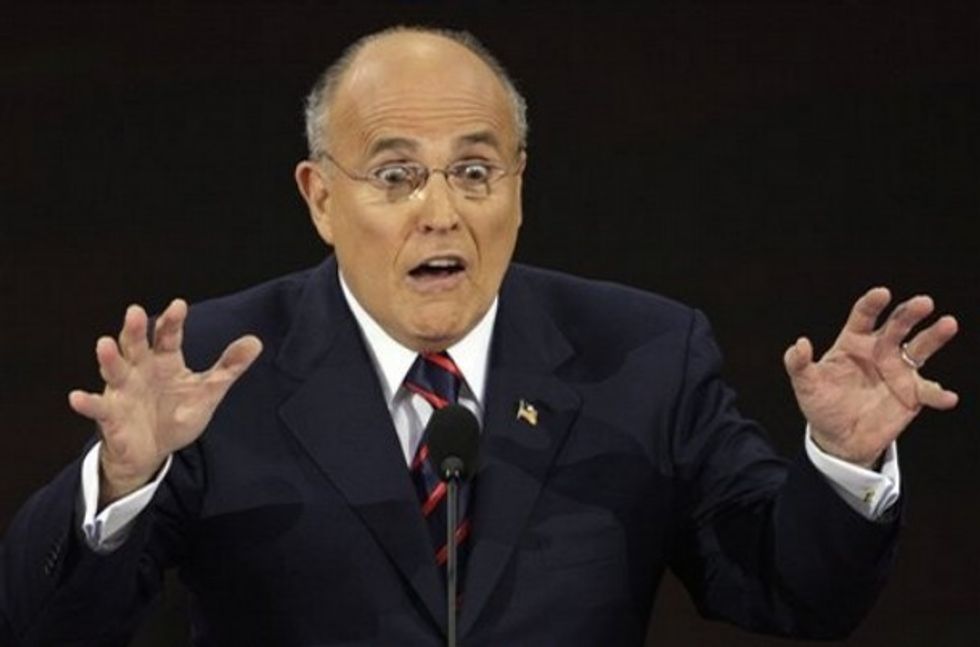 Oh hey, Donald Trump's very good brain is even more batshit than usual today, if you can believe it. Twice this morning, first when he left the White House, and then when he was about to board Air Force One to go say "PEW PEW! DID YOU HEAR ABOUT MY YOOGE ELECTORAL COLLEGE WIN IN 2016? WITCH HUNT! KANYE IS MY FRIEND!" at the NRA convention in Dallas, he answered some questions about Michael Cohen, Stormy Daniels, and Rudy Giuliani, and the point he needed to make was that Rudy Giuliani is WRONG and STUPID and BRAND NEW AT THIS and THE BEST PEOPLE and MY FAVORITE SLEEPOVER FRIEND who is a LIAR. Look, this totally makes sense, if you are one of the horseflies that lives in the president's brain cavity:

“He started yesterday. He will get his facts straight,” Trump said while leaving the White House ...

ACTUALLY they've been working together since around April 19, and unofficially before that, which is not "yesterday," so that's a lie.

Never mind, next question, which is WHY YOU LYIN'? And why did Trump lie a few weeks back on Air Force One, saying he didn't know anything about the Stormy Daniels payment he was a party to? WHY, ASSHOLE, WHY?

“I didn’t change any story."

You did, Emperor Dementia Poops, you did.

You are doing nothing good for the country, so please go eat shit.

“When Rudy made the statement, he had just started and wasn’t totally familiar with everything."

"And Rudy, we love Rudy, he is a special guy. What he really understands is this is a witch hunt."

Rudy Giuliani is not a "special guy," he's a malicious old geezer who seems to have been dropped on his head as a senior citizen, so LIE LIE LIE.

Before we get to Rudy Giuliani's big correction (because of course he has issued a correction), Think Progress flags an interview with NBC News where Giuliani "clarifies," saying that Trump was sending Cohen all that money, but he didn't know what it was for. Also, he was just holding these marijuanas for his friend, honest, Officer!

“I don't think the president realized he paid him (Cohen) back for that specific thing until we (his legal team) made him aware of the paperwork,” he said.

Giuliani said the president responded, "Oh my goodness, I guess that's what it was for.”

Finally, he says Trump didn't commit obstruction of justice with James Comey because Comey is very stinky. Giuliani's statement finishes with, "In conclusion, 9/11," because that is how Rudy Giuliani finishes statements, corrections, prayers, and Taco Bell orders.