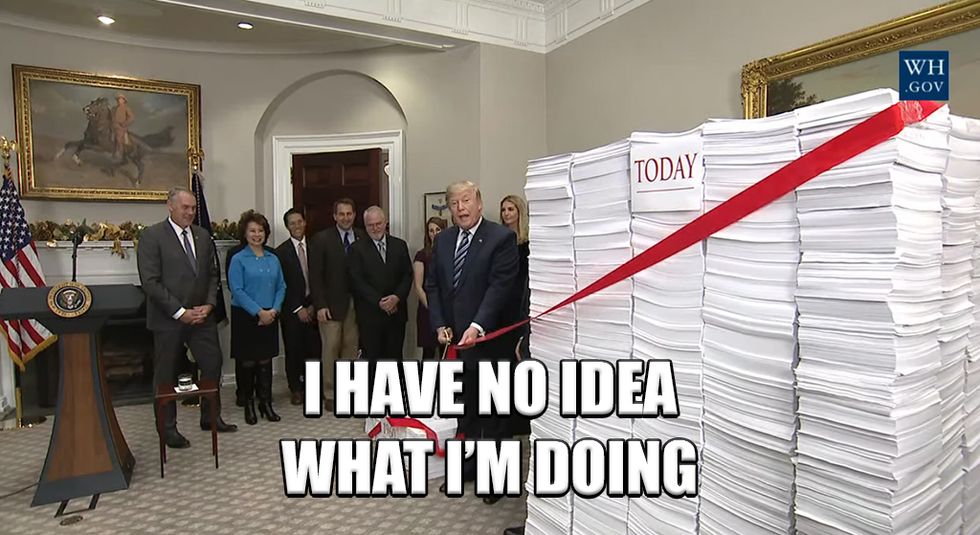 Morning Wonketariat! Here's some of the things we may be talking about today, but first FIONA FRIDAY!

That super gross music mogul who set up the meeting between DJTJ and the Russian lawyer lady tried to set up meetings between Trump and Putin way back in July of 2015.

The shady Mercer-backed data firm Cambridge Analytica is under the spotlight as its Chief Executive just had a chat with the House Intel Committee, and Robert Mueller has been combing through its emails. [Archive]

Someone inside Deutsche Bank is telling reporters that they flagged $30 million Ameros belonging to Paul Manafort after executives started to wonder if they helped facilitate Russian fuckery. (LOL, "started to" "wonder" "if.") [Archive]

Incensed that ANYONE might engage in partisan politics, Chuck Grassley is jumping into the Trump-Russia Investi-Gate, demanding answers about the sext messages from two former members of Robert Mueller's team, while other Senate Republicans throw their support behind Muller.

Here's a quick and easy breakdown of things in the Trump/Ryan tax cuts (for the super rich) in comparison to the current law (minus the dearth of corporate tax loopholes).

Some Congressional Republicans might be bailing out of the Trump tax cuts (for the super rich) unless they get certain things. [Morning Maddow!]

In order to avoid a government shutdown, the rumor mill on the Hill is that Senate Republicans are stripping CHIP, funding for Veterans Affairs, and Defense appropriations from their second stop-gap measure, but the jury is still out on FISA and hurricane relief. Behind closed doors, Democrats are calling this "Puntagon."

Are you one of those wonky nerds who stays up at night drinking heavily as you wonder what your Congress critter pays in taxes?

Republicans really want to drill in ANWR, and they're doing their damnedest to slip it into the the Trump Tax cuts (for the super rich), and it's causing all sorts of weird alliances between activist, lobby, and protest groups.

Trump's Verizon attorney at the head of the FCC killed net neutrality yesterday in a party line 3-2 vote that featured some passionate statements from Mignon Clyburn and Jessica Rosenworcel, and the Internet hive-mind has now become an unstoppable rage monster.

Sen. Ed Markey has introduced a hail mary bill to save net neutrality under the provisions of the Congressional Review Act -- the catch is that Trump has to sign off on it.

After everyone took to Twitter to rage about the death of net neutrality, the FCC voted to open review of the 39% cap and UHF discount which, if passed, would allow conservative media outlets like Sinclair to gobble up more small town TV stations.

Details are leaking out about Trump's National Security Strategy, suggesting that his administration will view the US in constant competition, and must pick fights with everyone to protect itself.

Republicans are sick and tired of debating judicial nominees, so the Senate Rules and Administration Committee will meet Tuesday to slash the the debate cut-off time in order to fast-track more Trump judges.

Closet gun fetishists are fucking pissed Congress wants to debate the difference between gun rights and gun control in the wake of so many mass shootings. Poor snowflakes.

In a follow-up to their blockbuster story about Congressional opioid fuckery, WaPo is reporting that DEA officials think the new law to regulate opiates is pharmaceutical-grade bullshit, and is making their jobs even harder.

Trump is rumored to be pushing a freeze on federal wages, a move being criticized as just another way to fuck over the rank-and-file federal workers holding the country together.

In a bizarre PR stunt, Trump touted his administration's rampant destruction of federal regulations by cutting a ribbon. Don't worry, it didn't make sense to the press corps either.

UN Ambassador Nikki Haley broke out her own "indisputable" props to accuse Iran of violating the nuclear agreement, a move critics are calling a dog whistle for warmongers.

Trump officials are mad at REXXON for going rogue (again), going so far as to suggest that his days are numbered after offering to sit down and shoot the breeze with North Korea on Tuesday.

After Trump heard that Paul Ryan was becoming an old man, Trump called Ryan and asked him not to leave, confessing all his lonely sads.

AS FIRST REPORTED by Russian state media, Trump called up Russian President Vladimir Putin yesterday to talk about "spy-mania," haters, North Korea, and how much bigger America is than all the other countries Russia's seen before.

It looks like the 2018 midterms could be a complete toss-up now that olds are retiring to K Street and perverts are being quit/fired.

Conor Lamb is a Marine vet running for the seat vacated by disgraced PA Rep. Tim Murphy, and he's giving hope to Democrats trying to take the House.

Ryan Zinke "You're Fired" a couple of Interior Department employees for playing grab-ass after the release of an internal survey found 35 percent of Interior Dept. employees had been victims of harassment in the last year. Still no word about all the fancy plane and helicopter rides yet.

The biggest corporate landlord in the US has been slapped with a massive lawsuit alleging violations of the Fair Housing Act, saying that the company has a long practice of denying housing to former inmates who are African-American and Latino.

Y'all! Virginia's Republican Senate primary crazies are ALREADY accusing each other of being secret Muslims, causing Confederate candidate Corey Stewart to accuse his challenger, E.W. Jackson, of being "off his meds" with Stewart recalling Jackson's previous accusations that yoga leads to Satan. LOL!

Since Jesus has left him hanging by the phone, Roy Moore STILL won't concede, even after Sarah Huckabee Sanders made farty noises with her poot lips.

The wife of the Kentucky Republican state Rep. who killed himself amid accusations that he sexually assaulted a 17-year-old girl in 2013 as a youth pastor has decided she wants his state house seat, calling the eight-month investigation into his boozy molestation part of "high-tech lynchings based on lies and half-truths."

Here's a fascinating story about a grifty small town sheriff under FBI investigation for stealing money and spying on people in order to ferret out a whistle blower. It's like a Coen brothers movie, but way more terrifying -- it shows how yokel cops think they're above the law.

A bomb-sniffing dog in Chicago's Midway airport can't stop pooping in the terminals. You've been warned.

Some folks in Missouri are fighting porch pirates stealing holiday packages by filling boxes with dog and cat poop. Feel free to improvise.

Brexit talks have moved to Phase Two after a deal was struck that will see the UK continue to follow EU law for another two years and not play around with any EU lawmaking bodies.

Now that nobody is paying attention, China has stepped up its island hopping shenanigans in the South China Sea.

The LIBERAL New York Times has made a handy infographic of all the 103 times Trump has lied this year. (Seems low?)

Nerds are speculating that the sale of 21st Century Fox to Disney means Rupert Murdoch will try to expand his conservative news empire to local news stations.

Dame Peggington opines that Mr. Donald Trump's tomfoolery may yet lead Republicans down the primrose path provided they do not succumb to diddling knobs, die in a horrible tweet-powered holocaust, or be ripped asunder by Dogberry and his constabulary. [Archive]

Help us fight the good fight by throwing Ameros at us!